Oh drat! Poor us, 'stuck' in Napier for over a week waiting for the wind to stop blowing at ridiculously high speeds out there. What shall we ever do?!! Hmmm. I don't detect too much sympathy- nor should we! Napier is a soulful seaside town with fantastic wineries, restaurants and friendly people. It's easy to lose yourself here dockside for weeks at a time. The first day we arrived we cycled into town, and ran into Carlos, a large boned Samoan Kiwi serving at a wine tasting store. He gave us lots of great advice on how to enjoy Napier, where the 'hot' wineries were, and sent us out that Sunday to a live concert at one of the seaside wineries. Sitting in the warm sun, with vistas to the sea we listened to a jazz band while drinking a bottle of Hawke's Bay Chardonnay and eating pizza (total cost: 35NZD). Thanks Carlos! 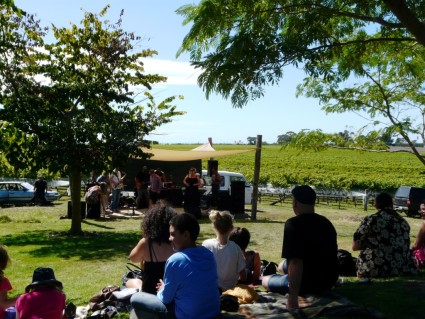 Carlos takes his own advice- that's him on the right

We arrived into Napier just ahead of the Round New Zealand (RNZ) Yacht Race and were lucky to get space in front of the Napier Sailing Club. (NSC was a fantastic host to us, even though they had their hands full with the race. We were ushered into our dock by Lyall, who also took the time to show us around the facilities.) As the raceboats came in over the next few days we had an interesting time meeting the crazed sailors. Who on earth would decide to race a boat double handed around New Zealand? Check out some of the boats taking part! 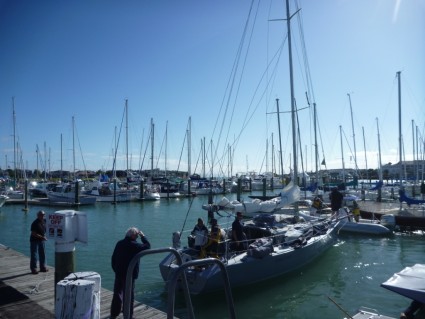 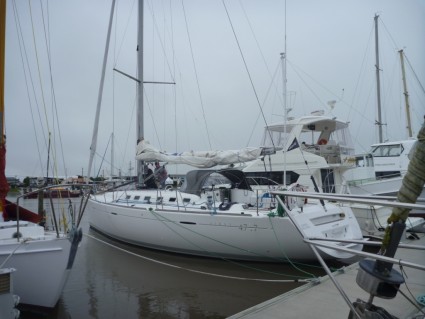 This Beneateau First series is the big boy on the circuit 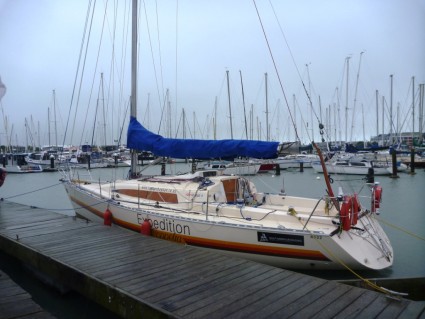 Hatches are battened down with plywood 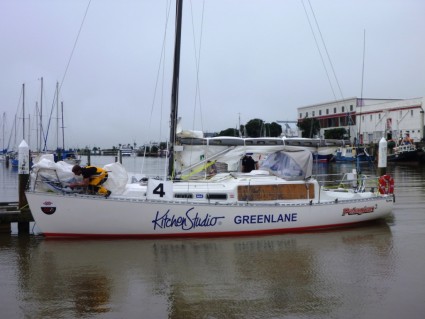 May Day!
A feat just to circumnavigate the islands, racing it is an entirely different category.

Brave or foolish? We won't be the ones to judge. Their stories though were of unbelievable strength and fortitude amidst utter chaos of a 70 knot storm on the Tasman Sea (West Coast of NZ). Here one of the yachts (34' sloop) actually called a mayday when they started to sink. The captain described the storm as terrifying, yet somehow absurdly peaceful as their boat started to go down, with water coming up over their knees inside the boat. They were well offshore, past any help NZ Maritime could provide. He tells us that when he called the Mayday, he fully expected to die, and was merely marking the spot where he would go down. His crew suddenly shook them out of this passive stance. "F@*k death tonight!" he roared. This single declaration was all that was needed to plunge them both into survival mode. They turned on crash pumps, started a bucket brigade and found the leak, patched it, floated the boat and SAILED ON!!!

It poured with rain while they were in town, licking their wounds and gearing up for the next race. Roger, from Doyle Sails was busy inside the Sailing Club fixing up torn sails. 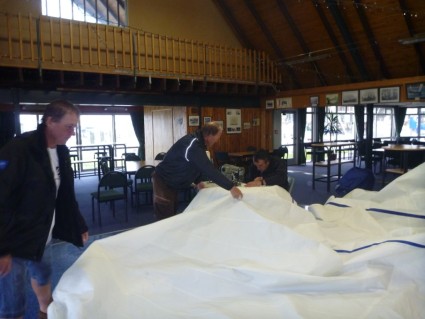 We were invited with the group to a wine tour which was hosted by RNZ. The wineries we went to put on a great show and we were able to purchase some fantastic wines, some at reduced rates for the racers! The racers didn't wait for a weather window like us- they just went out into the storm with wind and waves pounding down on them. We took the time to cycle out to the point to watch the start of the race, which was in fog, and out into a 40 knot northerly! Yup, they were headed north!

While the racers were there, we were particularly pleased to meet Tom and Vicky on SV Sunstone. Tom is in his 60's and Vicky in her late 50's. They sailed from the coast of B.C Canada back to NZ to have a chance to sail in the RNZ double handed race!! The two have lived aboard their sailboat since the early 80's and have cruised and raced her all over the world- 180,000 nm so far. Having checked off everything on their cruising list they are now preparing to spend some time in Auckland, where they have residency. They invited us for tea and gave us lots of tips on cruising Vanuatu, as well as some great ideas for sail management in storms. We toasted them that night with a glass of, well, really really good red wine while eating lambshanks at the sailing club! 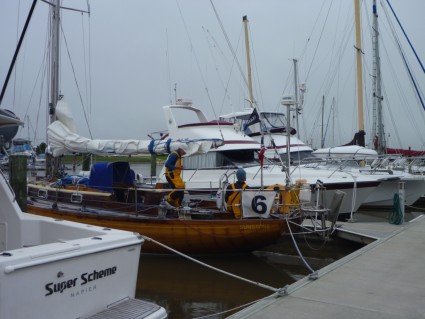 Tom and Vicky get ready for the last leg to Auckland

Napier is braided with bike trails, so we made good use of our bikes exploring the art deco town center, riding out through the country side, and visiting more wineries. Michael loves a glass of red with the best of them, but he can sniff out a good brewery in the midst just about anywhere. As such, we found ourselves one evening enjoying some great beer tasting at the local brewery. 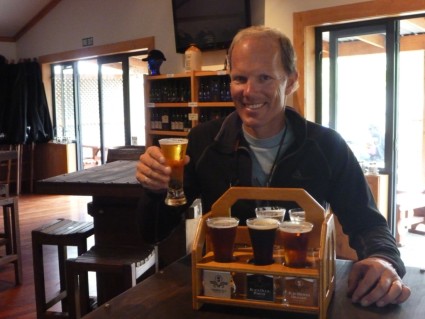 With Paikea Mist sitting right off the walk/cycle path we had lots of friendly visits from the locals, all offering a sincere welcome and apologizing for the weather! We really didn't mind in the least, we just kept buying more wine!
When the weather window finally opened up to round East Cape, we drifted off the dock at calm high tide to get over the bar and out to sea for our two day passage to the Mercury Islands. By the way, the word on Hawke's Bay red is that 2009 was a stellar year. With all the cold weather and rain this year, take a pass on the 2012 vintage. 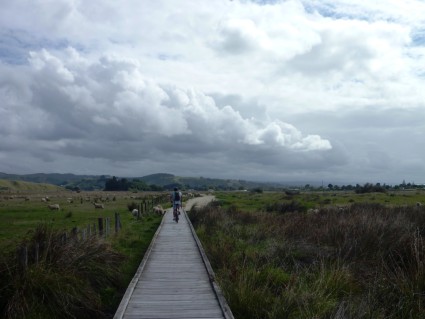