Final leg into Mercury Islands-Otto at the helm

Our two day passage around East Cape and up into the Mercury Islands was a breeze. The passage is known to be a bit of a bear, and East Cape itself is renowned for being particularly unkind. The last thing you want is to be bashing up around the Cape in a strong northerly. Of course, rarely do you have favourable winds on both sides of the Cape. From Napier, the first 24 hours of the run is North East, and takes you out to the Cape. From there, the next 24 hour line to the Mercury Islands is West North West. The past week we waited patiently (okay the wine part helped) for the endless string of gale and storm force northerlies to abate before we cast off the docklines. We left at high tide to clear the bar at the entrance to Napier's inner harbour.

The first day we sailed and motor sailed in light airs to make our way out to East Cape. We cleared East Cape early the next morning, greeted by several albatross gliding effortlessly across the swells. The second day the winds began to fill in again. The result was a very pleasant afternoon and overnight sail with wind behind the beam the entire way. It's been a long time since we've enjoyed a downwind leg on Paikea Mist, and it sure felt nice!

At Runaway Cape we encountered a commercial fish boat who called us on his radio. He had wrapped his fish nets in his prop and was wondering if we had any dive gear on board. He had gone under for a look, but couldn't stay down long enough to do anything. He told us that he thought the net was wrapped once around the prop, and it shouldn't take long to cut it away. He didn't have any dive experience, so asked if we would dive to disentangle his mess. The winds were light at the time, but the 3 - 5 ft swells were still pushing both of the boats around, and the water was fairly choppy. Michael and I had a serious chat while we considered our ability to help him. As he didn't have a dinghy, we would first have to deploy ours. With our dinghy secured for an offshore passage, and our rigid davit system, this task can be quite challenging while at sea in the swells. We also thought about our own dive skills, equipment and experience. With mainly calm tropical water dive experience and lightweight 2mm wetsuits, we were nervous about diving under the heavy vessel as it plunged up and down in the swells. We discussed our concerns with the Captain of the fishing vessel, and regrettably informed him that we were unable to provide assistance. We did let him know that the 50' motorsailer "Solstice" was a short way behind us, and possibly in a better position to provide assistance. We had met Soltice's owners, Toby and Cath, in Napier (they are from Keri Keri just north of Opua), and guessed correctly that they might have the experience and the right equipment needed to tackle the problem. It took Toby an hour and a half, and a second dive tank, to free the badly wrapped net. The fishboat was then able to fire up his engines - we can only imagine how happy and relieved the fish boat captain was.

The next morning as we arrived in the Mercury Islands, the sun had just climbed out of bed, and was waking us up to what looked like a stellar day. 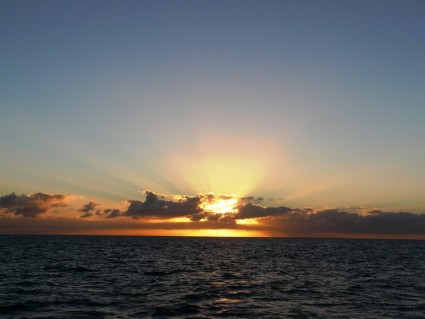 We diverted our path away from Great Barrier Island when we spotted this gorgeous uplifted island. 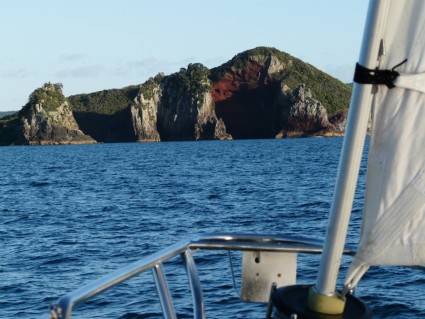 Korapuki Island is too interesting not to stop
We anchored in behind it and inflated our kayaks where we paddled through a series of caves and overhangs, and eventually around the entire island. 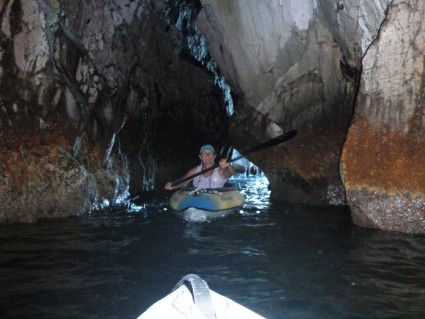 Nothing like a little exercise after being at sea for a couple of days! After we pulled our kayaks on board we continued our sail to tuck into a lovely bay behind the protection of Great Mercury Island.