01 April 2012 | Great Barrier Island
Gloria
The sign on the small dock said "Sanctuary Walk- tie up your dinghy, and follow path up past houses, Glenfern HQ on your right". We were looking for a diversion- and this looked like just what the doctor ordered! We had spent the last 5 days anchored in squirrely winds in the protected harbour of Port Fitzroy, Great Barrier Island as we waited for the tropical depression of Cyclone Daphne to brush by the northwest coast of New Zealand as she zoomed her way southeast. We love Great Barrier- the island was high on our list to return to after spending time hiking and hanging here last year. But in five days, we had crossed off every hike available to us, and this pleasant sign was a warm welcome.

We wandered up through an exquisitely manicured garden along a perfectly laid brick foot trail towards a group of freshly painted heritage houses. New Zealand land owners are so amazing I thought to myself- this seems in keeping with the same level of openness to visitors as we found on the privately owned Great Mercury Island. A second sign said "Follow the driveway up to Sanctuary Walk". So up we went, up and up and up through steep, deep green pastures and a seemingly endless series of gates (which we carefully closed behind us), until finally we came to another sign which simply said "Sunset Lookout". We followed the path as directed and climbed out to Sunset Lookout. Here, sitting atop a craggy peak, we found a bronzed plaque and a hat with an epitaph to Tony Bouzaid: the script indicated that he passed away at 71 years of age just last October. As I looked at this beautiful marking of a man's life I thought to myself, this must have been a wonderful man. The hush of the wind seemed to speak to me there at that lookout, and the voice was soft and kind. 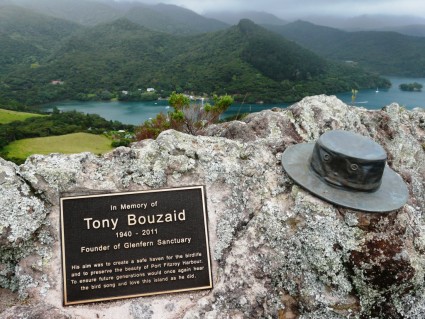 We continued on further up the trail and came across the next sign which directed us to the "Giant Kauri Tree". To our surprise, the trail not only ended at a 600 year old Kauri Tree, but there was a very solid suspension bridge from the steep hillside out to the crown, some 50' above the forest floor. Despite winds of 35-40 knots screaming through the valley, I took a deep breath and followed Michael out to the viewing platform. This tree was a veritable giant, and while the branches were at the liberty of the wind, the grand tree stood up boldly- she'd seen it all before. We stood in among the branches, looking over the forest canopy below and for a sublime moment felt a little bit like the tree herself, wondering how many storms like this one she had weathered in her long life. 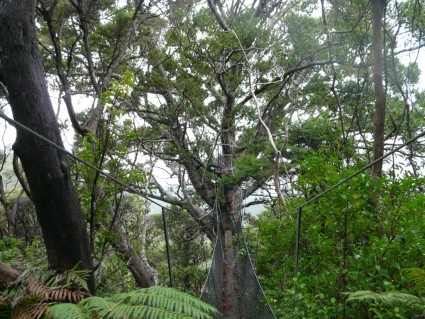 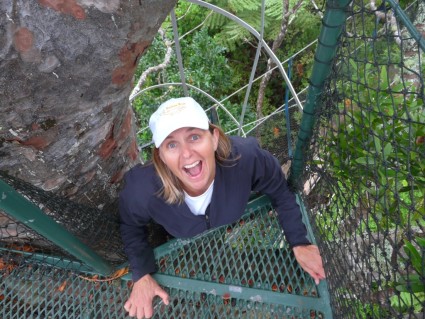 From the Kauri tree , the trail dropped down through a magical, enchanted forest. The native bush draped the well groomed trail, which zigged and zagged it's way down to a gurgling stream below. 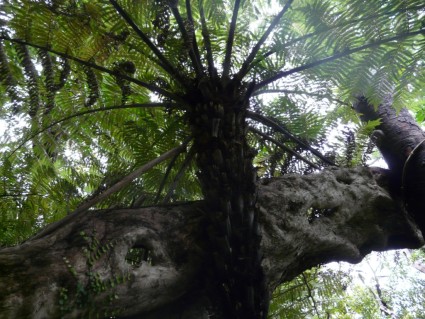 The singsong chuckle of the NZ Kaka and the small peeps of Fantails filled the air. We never spotted the Kaka, but the Fantails made a pretty show of following our progress, effortlessly flitting in and out of the bush around us. Back in the dinghy we pulled away from the dock and gazed back up at the sanctuary. Despite being a fairly overcast day, the sun was shining on Sunset Rock.

We managed to get the hike in just before Daphne dropped her endless buckets of rain down on Great Barrier. We watched as rain came down in sheets, hitting the water in several directions at once. After a day and a half of cabin fever, we found ourselves drawn to the Sanctuary yet again. This time we decided to follow the quad track which continued on up the hill past the Giant Kauri. Michael and I seem obsessed with heights. They call to us: "climb up here, take a look, it's beautiful up here". Up and up and up we went along the narrow track. Some parts were so steep they secured chicken wire on the track to improve the traction. Finally we were traversing along a narrow ridge when the track ended abruptly at a stony outcropping, an obvious place to find the ultimate dizzying lookout. We pulled ourselves up, foothold by hand hold until we were on top of the world. I immediately sat down, the wind, with the clouds whizzing overhead gave me vertigo and I wasn't completely sure I could hold my footing! Michael stood into the wind and took some amazing photos. 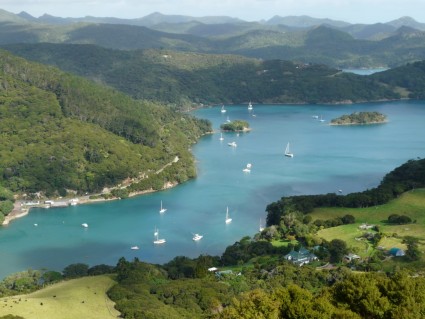 On our way down we passed the houses and received a friendly wave from one of the folks there. We hopped back into the dinghy and zoomed across the bay to stop in at the grocery store, which was when we got our first inkling that perhaps we had made a pretty big assumption! The small pamphlet posted to the information booth said "Glenfern Sanctuary Walk- contact HQ for your guided nature walk (min 4 people) or enjoy self guided walks." Hmmm...Michael this sounds like a commercial endeavour (think again!), but those signs made no mention of money... Michael and I played with the riddle for a bit, and I resolved to google it when we got back to the boat.

Late that night, a treasure box of information poured out of my one ping of the google search button. Tony Bouzaid was one heck of a man. Among other things he was an avid yachtsman, and had in 1979 won New Zealand Sailor of the Year. He was a forward thinking conservationist, and a very successful business man. He used these two energies to create Glenfern Sanctuary, a non profit environmental project. Glenfern is a very large chunk of land, sprawling out over 260 hectares, on the end of a peninsula. His dream was to create a pest free zone, allowing native bush and birds to flourish. To this end, he built an 8 foot high, two kilometre impenetrable fence across the narrow part of the peninsula, successively cutting off his land from the rest of Great Barrier Island. The fence itself is a remarkable engineering feat, and can be seen from several vantage points around Port Fitzroy as it blazes its way up and over the steep terrain. He then went about ridding his lands of possums, rats and other pests, laying down 2500 tunnels and traps. He also planted over 10,000 native trees. He has received world recognized awards in environmentalism for these efforts, and the project is also funded through large non-profits such as WWF. Sadly, Tony Bouzaid passed away suddenly, still full of life energy, wisdom and sense of direction.

Assuming fools we have been, but appreciative ones. On the internet, Tony's breathtakingly beautiful Sanctuary Walk was advertised as $20 NZD per person, one we would have gladly paid for the privilege of sharing his vision, had we known. In the memoir section, we read that the bronzed sculpture of Tony's Tilley hat was placed on Sunset Rock because it was his favourite spot in all of Ferndale Sanctuary, and invites the reader to visit the Sanctuary anytime to pay respect. As we left early the next morning, sailing past the mussel farms he had hotly protested, I thought of him yet again, and wished the world was full of more men like him.

I would have dearly loved to have met Tony. He surely was a most magnificent man, one who had a passionate and kind heart and a sense of adventure too. We would have had endless, comfortable chats about this and that. I can imagine him extending us his well worked hand in a warm welcome as we pulled up to his dinghy dock, maybe even walking along beside us and sharing his passion for life, nature, and even sailing as we climbed up and up to his lookouts. But perhaps it was his voice I was listening to all along, warmly embracing us in his sanctuary.

For more information about Ferndale Sanctuary go to http://www.glenfern.org.nz.
As a parting gift to New Zealand and all that this amazing country has given us we have decided to make a donation to Glenfern "Save the Species" project.