One of the most remarkable aspects about cruising around the world is the friendships we have formed with other cruisers. In the South Pacific, we became fast friends with a group of cruisers we dubbed the Sweet Pea Fan Club, in honour of the humpback whale calf and her mom we swam with in Tonga. A little bit more mixing and mingling and we are all still great friends, even though we are now spread out around the world.

Here in Indonesia we have had a superb time becoming friends with the Swedes, Erja and Lars of S/V Ambika and Ulf and Christina from S/V Roxy. 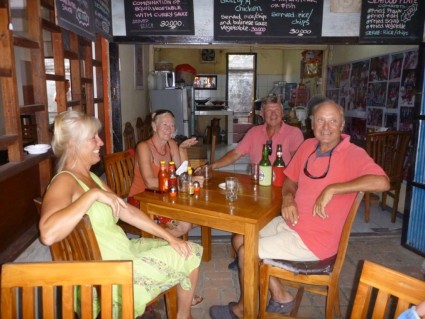 Round the table at Warung Apple, Lovina, friends gather

A funny thing happened here in Bali, Indonesia. We became honorary Swedes, able to sing Schnapps drinking rhymes! It all started when we swapped our Canadian flag with Roxy's HUGE Swedish Flag. The Swedish blue and yellow actually looked pretty sweet on the back of Paikea Mist, where it flew proudly for a couple of days. Poor Roxy didn't look nearly as dressed up in her small Canadian flag, but we sang our national anthem just off her boat, and that seemed to help things! While we went on a road trip to explore inland Bali the Swedes schemed. Arriving back to Lovina late in the afternoon, we were immediately invited (instructed?) to arrive at Ambika for 5:30 drinks. We were surprised when Erja and Lars welcomed us onto their boat to a Midsummer's Eve party. Both Erja and Christina were dressed in all white outfits, as is customary for the Swedish girls for this festival. Midsummer Eve occurs on June 23, the longest day of the year. We are told by our friends that it is the most important festival of the entire year in Sweden. We couldn't believe our luck to be invited to such an important celebration on Ambika, right here at the end of September in Bali! Oh, the fun of the cruising life!

On board Ambika, the Schnapps was carefully but freely poured into shooting glasses. The herring on hardbread was laid out on the cockpit table, looking like it was made at a Swedish catering company rather than a boat that has been cruising in a third world country for the past two months! Everything looked so beautiful. In the middle of the table stood a small replica of the midsommarstang ( a maypole that Swedes dance about on Midsummer's Eve) . Before shooting the Schnapps we learned, sort of, the words to a Schnapps drinking song. And the games began. A round of Swedish Schnapps, the Schnapps itself, the delicious herring, and plenty of laughs. Once the bottle of Schnapps lay empty at the side of the table, Lars took out his sword ( a machete from the South Pacific islands) and dubbed us honorary members of the Swedish Schnapps Drinking Team (now dubbed SSDT by us) and granted us permission to teach the Schnapps songs to other unsuspecting souls the world over!

If you are interested in learning the words, just let us know, we will start making the Schnapps!