Let me tell you of adventure, amazement, sadness and hope on a small river found in Borneo, the world's third largest island.

From Bali, we headed north across the Java Sea and up the Kumai River, where six cruisers hopped aboard a "kloktok" to wind our way up ever smaller rivers on a two day adventure of a lifetime. Deep in Borneo's equatorial rainforests, the Tanjung Puting National Park stands in all its many natural wonders. Here the Borneo Orangutan struggles to maintain a foothold, and our goal was to have a close up look at this increasingly endangered species. 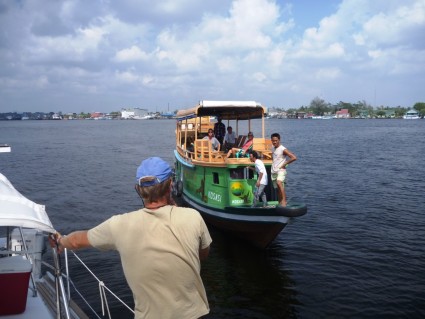 The boats are called Kloktoks because of the sound of the 200rpm single cylinder diesel engine, without muffler!

Our adventure was much more than that. As we made our way up the river, the thick and tall palm fronds that bordered its edges eventually gave way to the tall and varied trees of the Borneo rainforest. Just when we thought the river couldn't get any narrower it managed to, and we squeezed our way through the thick vegetation which clung to the sides of the deep black river. With the help of our knowledgeable guide, and to our endless amazement we spotted not only wild orangutans and several kinds of monkeys, but also crocodiles, multi-colored kingfishers, birds of prey, monitor lizards, and even a tiny nest of the Borneo fantails along the river's edge. 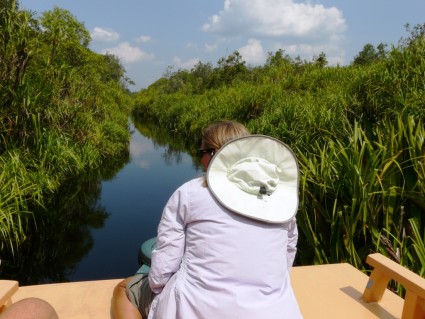 We eventually tied up at the dock to make our way up to the feeding station at Camp Leakey. The breeze previously cooling us by the progress of the boat came to an enveloping halt. Clobbered by the heavy and hot tropical heat we made our way along the boardwalk and trail to the feeding station. On the boardwalk we were immediately greeted by Percy, our first encounter with a rehabilitated Orangutan. Most of the orangutans who visit the feeding station were once captive, or they are offspring of previously captive or otherwise rescued Orangutans. Daily feedings from the park rangers in the form of heaps and heaps of bananas helps to round off their diet as they re-establish themselves in the wild.

Man has always been in awe of these gentle creatures, but rarely respectful. In the past, Orangutans have been captured and kept in cages, sold as pets on the streets of Asia. Ironic as it may seem, man is both their biggest admirers while simultaneously being their single largest threat. Today their habitat is being rapidly destroyed for the price of hardwood, all taken illegally to the world market, whilst the government of Indonesia turns a blind eye, palms held open. In place of over 5000 species of plants and trees found in Borneo's rainforest, a single crop is sown where the mighty jungle and all its occupants once held onto life on Planet Earth. Palm Oil. It's a common ingredient in all sorts of even more common things, including potato chips and plastic. Some estimate that if habitat destruction continues at the present pace, in 20 years Orangutans will be extinct. 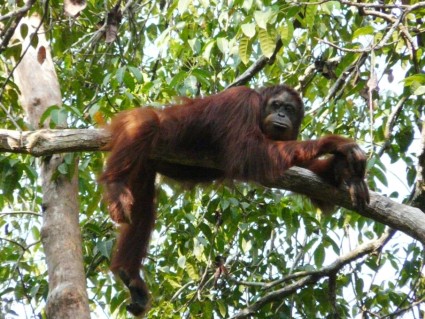 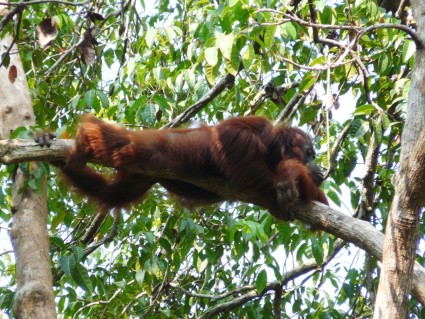 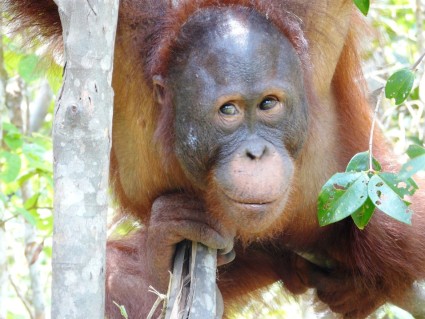 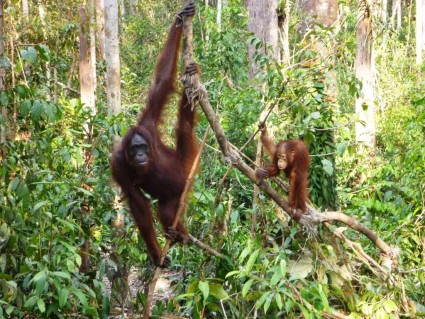 Young orangutans stay with their mothers from 5-8 years 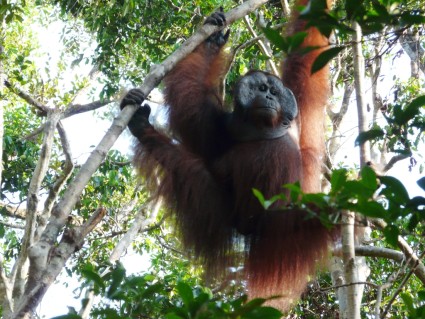 As for our group of humans, we spend hours and hours at three separate feeding stations being entertained by these wonderful creatures. We shoot only film, lots and lots of it. We watch in awe as mothers with babes clinging to their sides swing their way from one vine to the next, and eventually to the feeding platform. A sole male hangs effortlessly meters above, oblivious to the gorging of others. Gorging may not be descriptive enough, as we witnessed that a single orangutan can evidently place as many as a dozen bananas in his mouth at once.

Babies are everywhere, clinging, reaching, nursing, swinging, falling, recovering, hanging on. The numbers of orangutans living in the National Park are increasing. This is progress, this is hope.

As we make our way back down the river we can hear chainsaws ripping through the rainforest, near the boundary of the National Park. The sound rips through our hearts as we think of our new found friends back at Camp Leaky. As we step off the kloktok onto Paikea Mist her decks are covered in telling black soot and ashes. The rainforest is burning, and it is landing on our boat. The air is choked in smoke. I shed a quiet tear of hope for the Orangutan, and especially those wee ones. May they hold on forever, and may we do everything in our power to help them. 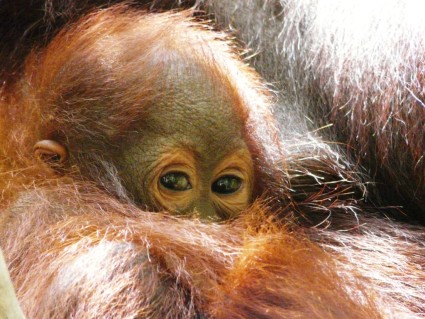 If you are interested in learning more about Orangutans and how you can help, go to www.orangutan.com
Comments
Newer Older
Contents