One of the most terrific aspects of cruising, and life for that matter, is crossing paths with old friends in random places. When we got to the Telega Harbour Marina in Langkawi, Malaysia, we knew we would meet up with our friends Gordon and Sherry on Serenity, who we hadn't seen since our arrival in Kupang, Indonesia earlier in the year. We had a great time wining and dining and exploring with them in Langkawi. We were also pleasantly surprised to cross paths with Bruce and Alene on SV Migration, and spent at day with them touring the island, which included drinking their NZ champagne at the foot of a waterfall! 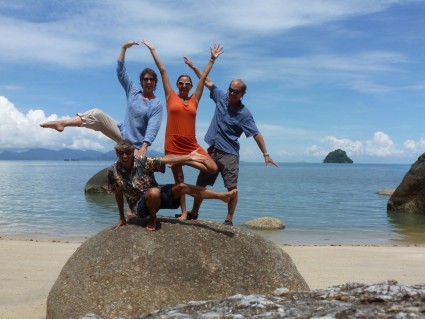 One of the unique aspects of Langkawi was the number of newlyweds visiting from Islamic countries. The women were always dressed in a full hi-jab, hot and heavy black cloth draped over their every inch, with only the deep-set eyes exposed. According to one source, they like to come to Malaysia, which although still a Muslim country, allows more liberal actions by the women, including holding hands in public. This seemed to ring true, as we observed many couples enjoying this type of 'freedom'. We found it difficult to reconcile the disparity between men and women though, as the men usually were dressed in beach shorts and a t-shirt. 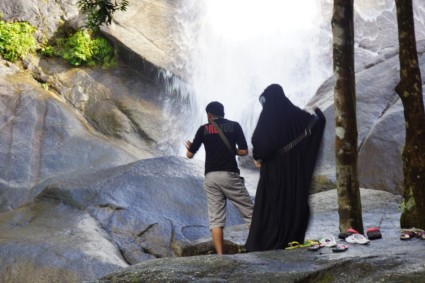 We checked out of Malaysia right at Telega Harbour, easy to do with the custom and immigration building just off the docks. We didn't leave Malaysia right away though, and instead poked around the north end, taking Paikea Mist to a beautiful anchorage known as Hole in the Wall, where we anchored and explored the stunning river by dinghy, exploring our way through caves, watching eagles in flight, monitor lizards wiggling their way in the water, and monkeys on the riverside. Although busy with tourist traffic in the day, the anchorage is just too beautiful to be discouraged by the constant slap of waves as the tourists in long boats fly past.

We stopped at a total of three anchorages on our way up to the official check in at Ao Chalong, on the island of Phuket, Thailand. It seems the Thai customs and immigration turn a blind eye to cruisers who chose to spend a week or so in the islands as they make their way from Langkawi to Ao Chalong. Although it felt strange anchoring without the official clear in, we none-the-less enjoyed this relaxed entry into Thailand. 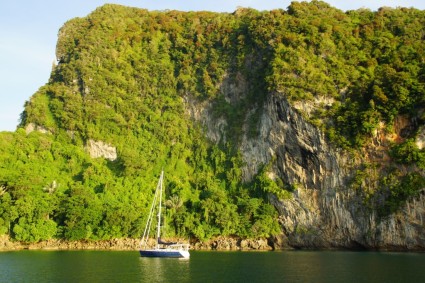 Paikea Mist is dwarfed by the massive cliffs at Koh Muk

Our first unofficial landing in Thailand was on the sandy beach of the fully enclosed grotto at the end of the Emerald Cave, on the island of Koh Muk. This has to be the most unique and beautiful way we have 'entered' a country EVER! This long dark cave is a popular tourist attraction so was easy to identify it as we approached the island. The cave entrance is otherwise difficult to spot, as it has quite a low overhang. As you make your way down the long cave, it becomes very dark, and we were glad to have our flashlights with us. As you swim out of the cave, you encounter a beautiful sandy beach, completely enclosed by high lush green cliffs. On our first trip, we arrived to a handful of people on the beach, but within a short time we watched dozens and dozens of tourists all wearing life jackets forming a long chain as they were taken through the cave by the guide, and suddenly the quiet beach was over run! 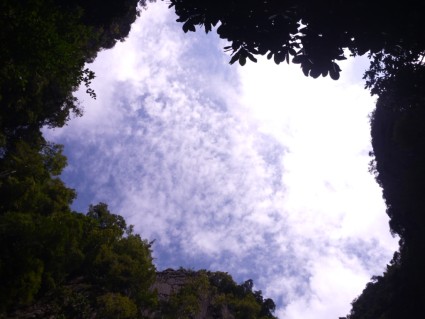 a new meaning of 360 degree surround 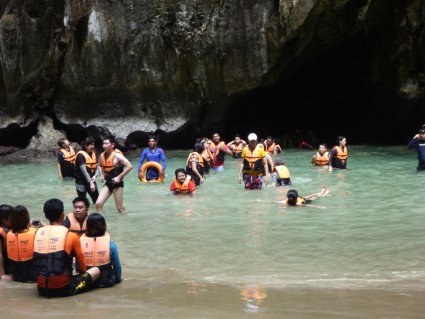 a new meaning to crowded

We went back later in the day with Gordon and Sherry, after the tourist boats had left and we had the entire cave and beach to ourselves, as well as the sudden down pour, thunder and lightning! 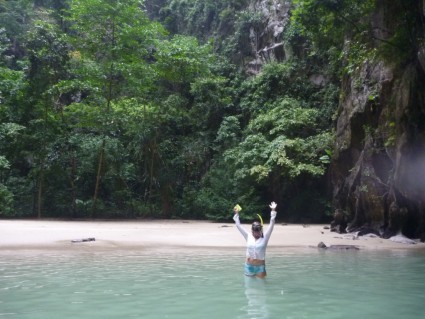 celebrating the solitude of Emerald Cave, as only a cruiser can do

Our anchorage at Koh Muk was beyond gorgeous, and we capped off the evening aboard SV Migration sipping champagne (again!) and eating Bruce's delicious pizza he makes on his barbecue. Sometimes cruising life is just one exceptional high; this day and evening was one of those highs! Great friends, and great finds combine in unimaginable ways at times it seems. 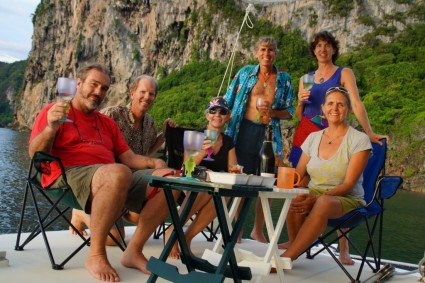 Champagne out again for Bruce and Alene's 3rd wedding anniversary- they tied the knot in Minerva Reef!

We are now officially checked into Thailand and at anchor at Ao Chalong. We've rented a scooter and have been busy checking out the chandleries and facilities in the vicinity as Paikea Mist will soon be tucked away for a few months as we make our way back home to Canada for the holiday season.