A boat after all is best afloat! Too close for comfort, after initial attempts to off load Paikea Mist our sterns come within 1 cm of each other

Our off loading was very dramatic and heart wrenching, but in the end PM is safely back in the water. If you saw the photo of our boat loaded onto BBC Belum, you will have seen how tight our boat was- stern to stern against a beautiful 70' Farr, his stern overhanging the top or our stern, with well less than a foot of clearance. Their initial plan was to lift us up before the Farr, but when they went to lift us they got the number of shackles wrong on the slings and the nose would not lift up. We only tipped the stern up making it within one cm of the gorgeous 70'Farr, and also leaned the boat over, not up. Very scary for us, and also for the owner of Far Out! After five harrowing hours they finally gave up, leaving us at about a 5 degree heel, strapped us heavily to the deck and place another support stanchion under us. We then waited another day until they could clear more room around the Farr to lift it out. When they lifted the Farr everything went very smoothly. It was a huge relief that we were finally away from the close proximity of each other. But PM still lay squished in by a tall air vent and the containers stacks. The containers were never meant to be on the deck in the first place and were part of the overall problem of not having enough room on the freighter. Sevenstar claims that they rent the entire deck, and nobody seemed to be able to explain why they also had containers on the ship.
Finally it was our turn, but not without further drama. When they lifted the complete weight of our boat onto the slings the boat swung wildly, knocking out the stanchions, which flew and whacked our dinghy (which was on the freighter deck as it wouldn't fit in the davits as there was so little room between out stern and the Farr's). As the keel swung it also took out a large metal upright post welded to the deck by the keel like it was a toothpick. It was an absolute miracle that despite the swinging nobody was hurt, and PM managed to miss all the sharp pointy bits that were within feet of her hull. Our keel suffered a scrap and it knocked out our speed log wheel, but other than that we were soon afloat again, which is a much more natural thing for a boat to be doing, and we could finally breathe again.
It was a challenge to have much confidence in the Dutch load master, a different, much younger guy than the pleasant, careful one who who loaded us. Granted, he was shocked to find our boat loaded so close to the Farr, but his reaction to this was a bit off the wall. He was a real cowboy, who didn't really seem to have good control of the other key workers on the ship, such as the crane operator. He seemed to make decisions quickly without thinking them through and got frustrated very easily, which he demonstrated by swearing, yelling and knocking things over on the decks. It was not a very professional scene, to say the least.
Anyways, we are very glad this is all over and it looks like Turkey is beautiful, although perhaps a bit over regulated. Apparently you are not allow to go diving without a Turkish guide, for instance! We had to pay 340 Euro to get all the paperwork complete, we are now the proud owners of a Blue Card which we must produce at pump out stations.
Oh well, the food is brilliant, the sun is shining and we are in the Med! The water even in the marina is sparkling deep blue and clear - the cleanest marina water we have seen anywhere, so perhaps the Blue Card is something that is working.
We have to pick up some small rigging parts that were delayed in Thailand and then we will once again be off to explore the Turkish Coast! YAHOO! 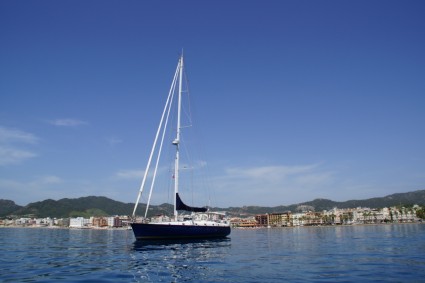