Magical Miles
We are into full on cruising mode now, hugging the coast of Turkey, exploring its various nooks and crannies as we go. We call this gunk-holing. Time has slipped away, into that gentle, repetitive lapping of routine which defines the essence of cruising. We wake slowly with the sun just above the horizon, sip on coffee and eat a breakfast of thick creamy yogurt, fresh strawberries and almonds. We might go for a kayak before the wind picks up, or hike high above our anchorage through small trails past lonely ancient ruins, or ride bikes on equally small roads through the hilly country side winding through tiny hamlets perched high in the mountains. Back aboard, cruising guides are scoured; the hot Mediterranean sun shines down with a fresh afternoon breeze. We revel in the pure joy of being granted another day. Perhaps later that day, maybe the next, or the next after that, we eventually move on. We pick a new destination, sail, and hook anchor where we then enjoy evening sundowners with cruisers from distant ports. Recently we have sipped wine with Australians, drank beer with Canadians and had a wild evening with Brazilians! We take our dinner meal late in the evening, dining on freshly grilled fish with a mixture of wonderfully fresh organic vegetables, Turkish Meze platters and of course the ubiquitous olive or two. Finally we plunge into a deep sleep as the boat gently rocks to the swell of the Med. Wake up the next day and repeat. Anyone interested in signing up? 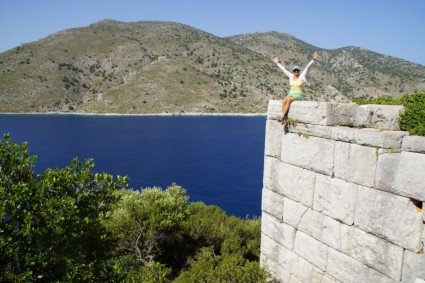 The Turkish coast has been simply magical! In the ancient city of Loryma we explored a huge citadel, built at the head of the pass into the well protected bay of Bozuk Buku. The citadel was built 300 A.D. most likely as part of the fortified protection of Rhodes, which lay right across the straight from this harbour. It took us a full hour to walk along the high perimeter walls of this magnificent citadel, all the while imagining the foot fall of sentry in years gone by, and marvelling at the sheer engineering feat. The amazing part was that we were the only people there. From the same anchorage we followed a well marked trail up the valley to further lookouts along the coast. On our way we passed old Roman pillars, walls and terraces, encountered goats, cattle, donkeys and even tortoises! All of this with stunning views to the crystal blue water below.

From the citadel we sailed to Datca, a small seaside resort town. We were planning on eating onboard, when our ears were drawn to a clamour of drums and chanting and singing coming from the town square.. We went ashore and found the Turkish flag waving everywhere, as people peacefully protested against the recent brutal reaction of police to demonstrations in Istanbul. 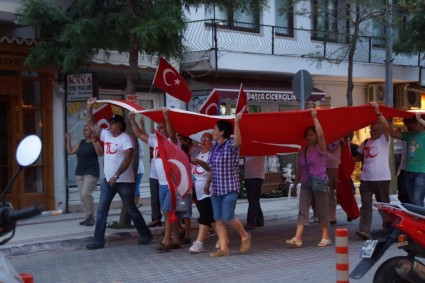 No riot police here, but plenty of locals out joining the protest

The ancient ruins of Knidos made our next destination. We sailed upwind in 20 knots of wind and 1.5 meter steep sided swells to reach her protected bay, where we struggled to find a spot with all the other charter boats and gulets who were also looking for protection from the wind and waves. All settled down by late afternoon, as several boats left the anchorage, leaving the remaining boats in peace. We went for a kayak and ended up enjoying red wine and appies on the Australian boat- Dennis and Boz were just heading off on their adventure, planning to sail their newly purchased catamaran back to Australia! Speaking of Australia, that night there was a gentle lullaby of a swell into the anchorage. Our raucous sail earlier that day had obviously loosened up the holds, and by 3 a.m. Michael was up exploring what the heck was clanking under our bed. Alas, it was bottles of wine from Australia which we had completely forgotten about! Now that put a smile on my face as I drifted back to sleep again. 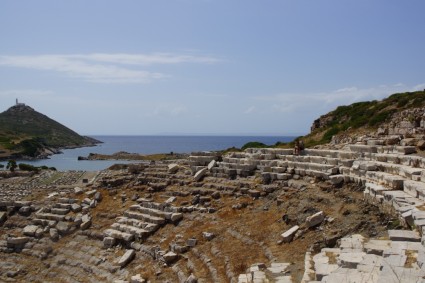 Michael, the thinker, in the amphitheater of Knidos. Aren't we all but just a teensy tiny speck in this long history of ours?

Our next anchorage was divine, a small cove where we tucked in as the only boat. We spent our day on easy boat chores, kayaking and of course hiking above the anchorage to take yet another shot of Paikea Mist from above. Some things you just never get tired of! 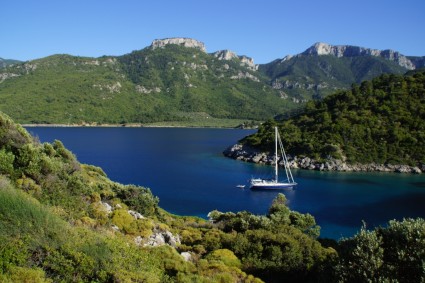 Swinging on our own - a perfect anchorage

This morning we sailed lazily downwind to Bodrum, where we have just set anchor off the magnificent St. Peter's Castle. The castle now houses the Underwater Archaeological Museum, which we have been told is a treasure not to be missed. Neither was the shot of Paikea Mist, sitting boldly off the castle, proudly flying her Canadian Flag.
Okay, by now you must get the idea! We can't wait to share this area with friends and family over the next season. So we repeat... anyone interested?! First come, first serve!