We are safely med moored in the Cesme Marina, where we have a long term contract until March 2014. Our immediate plan is to leave Paikea Mist to fly home to Vancouver for the summer months. We will return in the late summer early fall for a short cruise through the nearby Greek Islands, before returning home for the winter months AND for the birth of our first grandchild, due the end of September. Yahoo!

We are in the midst of our first meltimi, which is providing fortified winds and keeping the marina a noisy place with wind gusts in the steady 20- 30 knots range. The marina is brand new, and well staffed. Last night a genoa on a boat near us let loose. Within minutes the staff teared up in their dinghy and fixed the problem. Wow, a new meaning for 24 hour security!

The trip up from Bodrum was fantastic, with several stops along the way. We even managed to get some great sailing in which was nice. In the tiny walled sea side city of Sigicik we were lucky to hit their Sunday market, which was an amazing display of local food and craft. 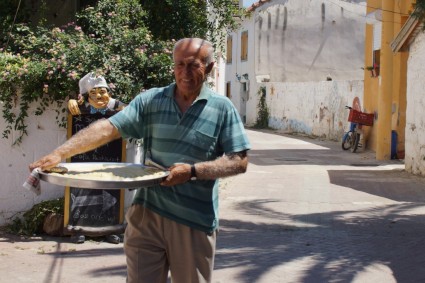 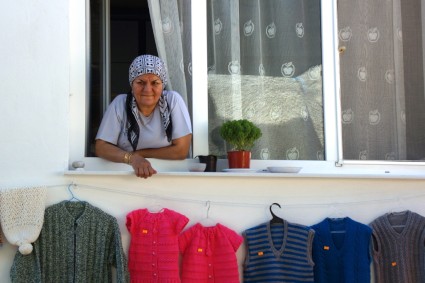 The whole town takes part in the market, this woman hanging out the window above all her knitting

One of the highlights our stop in Sigicik was a visit from our South Pacific cruising buddies on SV Curious (Steve and Trish), who went on to complete their circumnavigation last year. Steve and Trish arrived by car after driving up from Marmaris. It was so great seeing them again- we talked non-stop to midnight, woke early and started all over again! Our only complaint was that the visit was too short! Steve and Trish got us totally excited about becoming grandparents- even more than we were already! 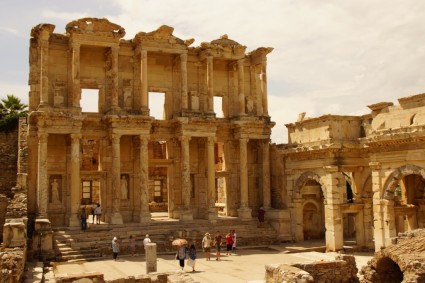 The remains of the library of ancient Ephesus

On the exploration side of things, the highlight was most definitely our stop at Kusadasi, where we checked into the marina in order to take in a visit to nearby Ephesus. Ancient Ephesus, is one of those mind boggling experiences, and is not to be missed on a trip to Turkey. We were especially intrigued by the Terraced Villas, which were a class of their own. Wandering through these exquisitely high end villas of the Roman Empire you could see just how lofty life was for the fortunate people whose prospering city was at the very gate of the Silk Road, both by road and by sea. Their homes were first class, some with private bathrooms, all with plumbing, beautiful mosaic tile artistry on the floors, and still colourful intricate paintings on the walls. Within these walls, it is easy for the imagination to thrive, making history come alive. They call Turkey the biggest outdoor museum in the world, and we have to agree.

In Kusadasi we also had the wonderful opportunity to meet Ken and Lima Wright on SV Surgiamo, another Canadian couple. It turns out they have a home just a couple of blocks away from our first home in Vancouver. Lima is Turkish, though grew up in Canada. She and Ken run a cycle tour company here in Turkey, and have done lots of cruising, so know the country very well. They sure got us excited about all the beautiful places we can explore. They go back to Vancouver in the winter, where Ken does the diesel mechanic course at our local Blue water Cruising Association Club- it's a small world out here folks! Hopefully our paths will cross again on one side of the world or the other.

Cesme Marina is a predominantly filled with locally owned Turkish boats, with most of the influx from nearby Izmir, which by the looks of the boats in the marina, appears to be doing very well economically speaking. At least the rich appear to be doing well. We've read that the gap between wealthy and lower class is beginning to gape in Turkey. As we are mainly travelling port to port, we feel we are receiving a pretty skewed version of Turkey. We look forward to doing some inland travel when we return next year to see the 'real' Turkey.

Cesme itself is a quiet little Turkish town, with a fortified castle guarding the inner harbour, easily in view from our cockpit. Everyday when I walk back to Paikea Mist from the showers I get the full view of the fortification, I have to take a second look- I still can't believe we are here in the Med, travelling in among these fabulous ancient structures.
Comments
Newer Older
Contents