I was standing on the scaffolding applying the second and final coat of wax to Paikea Mist's starboard hull, and enjoying the reflective effect of the nearby 14th century castle coming into clarity against the now beaming hull. This is hard but rewarding work, somehow the castle and the shine make it all worthwhile. Michael has already polished the hull, coaxing out oxidation that has built up from the combined and harsh effects of sun and salt. Over the years we have repeated this process dozens of times, and although we have paid others do the work for us we always find that we do the best job ourselves!

I was completely lost in thought, mesmerized by the reflection and the never ending rhythym of polishing when one of the guys from the Cesme Marina office walked by and commented on the job, asking what product we use to recondition the hulls. In his next breath he asked if we were "paid professional crew". He looked at me incredulously when I told him we were the owners! The rich Turkish owners here keep their boats sparkling clean, but they all have boat boys looking after the boats!

After John left I reflected again on his comment, and thought that in many ways, this stint of hard work is our 'pay back' to Paikea Mist for all that she has done for us over the years!. We have already been 'paid' in what amounts to a lifetime of memories. She has been our rock, our home plate, our reliable platform for discovery over the past four years, taking us everywhere we wanted to go, and with barely a whimper of complaint! She hangs tight at anchorages while we hike, dive, swim, kayak and explore our surrounds, and beckons us to move on to hoist her sails to new horizons. 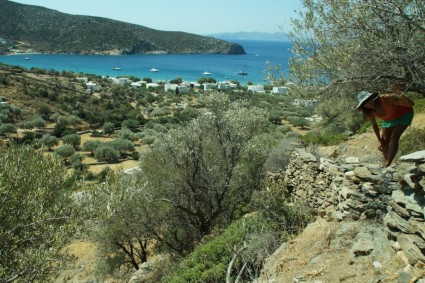 'stupid' fun- we often find we get a little stuck in our explorations! this time we discovered that terraced olive groves can be incredibly steep!

This past month has been no exception. We covered over 550 nm to visit 12 Greek Islands, 13 if you count a ferry ride to the ancient ruins on Delos! During this month we encountered all sorts of conditions, from wild and angry seas to calm motoring, from desolate anchorages on our own to small overcrowded bays.

One of our favorites stops was the mountainous and relatively verdant island of Syphnos, where we took our dinghy in calm seas to visit the exquiste seaside village of Kastro while Paikea Mist waited for us at anchor in the next bay. Kastro is a white washed village which clings to the top of a cliff in that postcard perfect kind of way. 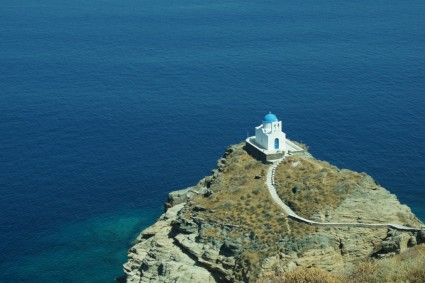 It was a hot climb to the top,and the view to the seaframed church below magnificient. After our meanderings there was even a beautiful bar overlooking the valley which offered up some ice cold Mythos beers! Perfect!

We also loved the area known as Cliftico on the island of Milos. As we sailed along the Milos coast we were really beginning to wonder if we were being led on a goose chase. The coast was at one time, likely very beautiful, but now there was endless mining operations which had cut away impressive chunks of the rock. Clificto though, was 'one of those' places, and we were so thrilled to find ourselves completely alone once the day boats began to leave around 4 oclock in the afternoon. The soaring cliffs made Paikea Mist look minuscule and a labyrinth of exquisitely carved sea tunnels begged exploration! All this and signs of volcanic activity too! Just an all round amazing place. 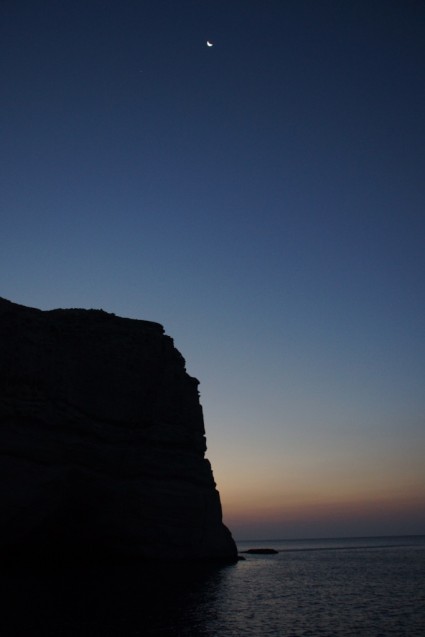 We spent the most time on the island of Lesvos, where we rented a car to explore the island, the third largest of the Greek Islands. Lesvos was by far the most traditional island, but even here signs of the 'old way' of doing things were obviously on the decline. At one time, the only method of transport in the Greek Isles was a donkey ride through the olive groves. 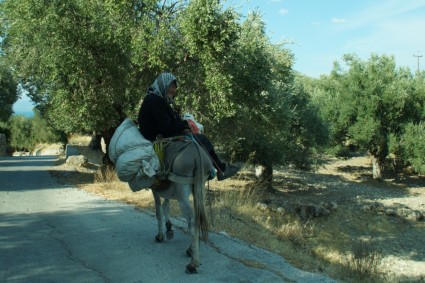 This peasant woman is giving the donkey swift kicks to his haunches to keep him moving!

Lesvos was a most beautiful island, adorned with endless olive groves as well as beautiful pine forests. The highlight of Lesvos was the beautiful town of Molivnos, situated on the northern shore, adorned with a castle on top and a trendy but laid back waterfront with a great selection of restaurants. 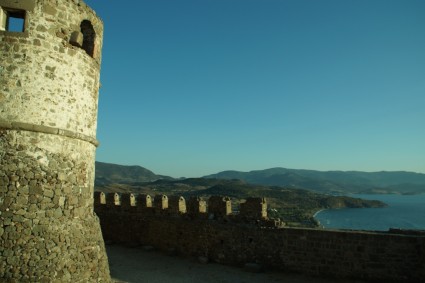 We wrapped up our trip on the island of Hios (also known as Chios), which lies just a scant 9 kms from Cesme, Turkey. Hios is my personal favorite. We rented a car again and explored the medieval towns which were situated in the center of the island, far from marauding pirates! 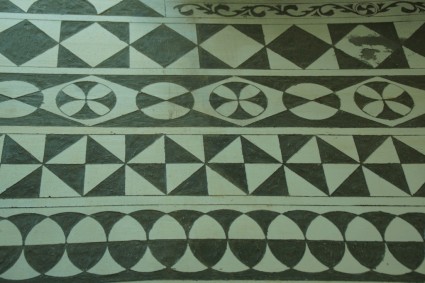 The town of Pyrgi was exceptionally beautiful, with all the buildings painted in a traditional relief pattern using black volcanic sand stone against white. Many in the towns still carry out the traditional method of producing sundried tomatoes, by threading them and hanging them by their doors! Striking! 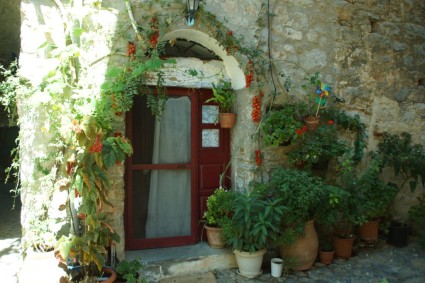 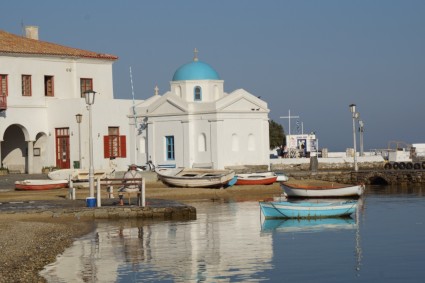 Church of St. Nicolas, Mykonos, where all faithful seafarers pray for safety while at sea. St Nicolas is the patron saint of Greece and the protector of seafarers and sailors.
Comments
Newer Older
Contents