Tomb Bay has been home now for almost a week. We just can't seem to get enough of this whole area of Skopali Limani, but this particular bay is one of our favorites. The steep hillsides remind us a bit of the Pacific Northwest, with emerald pine forests draping the shoreline, and snow-capped mountains in the distance. Certainly the unrelenting and heavy rain yesterday which washed our decks was oh-so familiar! But a quick glance from the cockpit reveals layers of history in a way that is totally unimaginable on our home coasts. 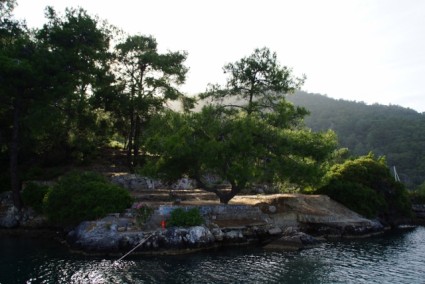 In thick blue paint strokes, "BREAKFAST LUNCH" is wearing thin, but indicates an abandoned restaurant along the shores. The terraces we are stern tied to are formed with layers of rock with evidence of crumbling abandoned stone homes, perhaps previously occupied by Greeks until the early 20's when they were relocated on the islands. 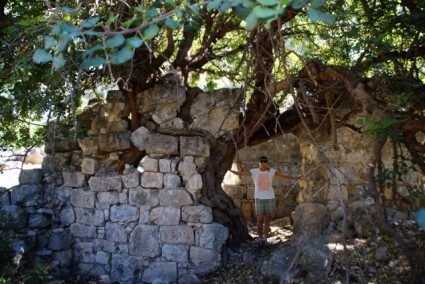 Yesterday we hiked through the thick pine groves along a well-marked trail that eventually turned into a small dirt road. As we neared the crest, we came upon an old settlement with olive trees terraced along the steep incline. We guessed that the rock terraces, which often carefully framed a single olive tree, have been around for hundreds of years, and as we climbed the trail we were reminded of the centuries of footfall that had gone before us.

Along the hillsides of Tomb Bay, the ancient Lycian tombs date back to as early as 5th century B.C. Historians think that the Lycians started building their own tombs while they were still alive. Lycians had an elaborate form of ancestor worship. To protect the tomb heavy fines were laid and curses written. Rather than cursing the invaders offspring, owners would write a curse on anyone and their ancestors who broke into the tomb! 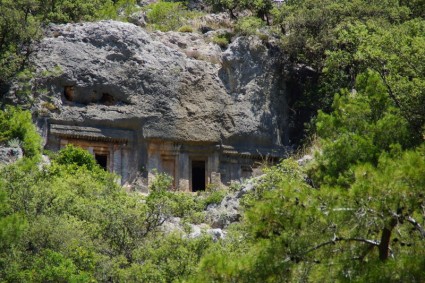 At the head of the bay a small vine draped restaurant is still pretty lonely for business, but there are signs of optimism for the coming cruising season.
Bilal stands on the small wooden dock organizing his workers. The men are already hard at work pounding in new dock supports and generally sprucing up the structure before the anticipated spike of charter boats hits the area near the beginning of May. Sporting a navy blue down vest, fashionable jeans and deck shoes, Bilal could easily blend into the mix on any street in Vancouver or elsewhere in North America. He waves to me as I paddle towards the dock and greets me with a hearty "Gunayden" before breaking into perfect English.

In the past 6 weeks of cruising we have encountered no other English speakers, so I relish the opportunity for a morning chat, and of course the opportunity to find out a little about Bilal's part of the world and hear his story.

At 40 years of age, Bilal is the perfect example of what makes Turkey such a wonderfully fascinating country. He tells me that he grew up as a Nomad in the hills above Tomb Bay. Through the winters he slept in one room with his family of 8 other brothers and sisters and mom and dad. As a shepherd he boasts that he knows the mountains above Tomb Bay like the back of his hand. As a kid he walked 4 km each way through the steep and rocky terrain to his elementary school; his high school was 16 km away, again a trip he made by foot. He laughs out loud when he remembers that he mostly slept his way through high school!

While the rest of the world was changing 8 tracks for video cassettes, and my teenage friends were installing sound systems in their cars, he lived with oil lanterns and family songs. He had no electricity until he was 13 years old, and then it was the single light bulb. He tells me that as a child he used to walk down to the bay, where there was only one old man living at the head of the bay, growing watermelons. Seeing the mouth-watering gems, he and his brothers couldn't resist - they would sneak in and steal a watermelon and enjoy the juicy bits on the rocks high on the hills above. I easily picture him as a boy, feasting on the melon, dripping and sticky wet from ear to ear!

Today, Bilal runs the restaurant and dock at the head of Tomb Bay, and is now a busy entrepreneur. In his 40 years he has seen incredible change and adapted in full stride, although when I ask him if he misses his old way of life, he pauses only briefly before answering that indeed there are things he misses dearly.
He tells me that in his youth Tomb Bay had far fewer pine trees, and notes that they tend to kill the diversification of plant life. With nostalgia he remembers how the wild strawberry plants would cover the hills at this time of the year. He flares his nostrils and breathes in deeply, sighing in a lost memory of their fragrance that is no more.

At high season he says the bay will now easily host 80-100 boats, and can be very loud. The upside is that he serves up meals to as many as 100 people a day during the summer. He cell phone rings but he ignores it. Still feeling nostalgic, he compares the ease of communication in today's world. Through most of his life he explains, talking with someone involved walking there. Today he says he will make a big food order for his restaurant by cell phone. He is quiet for a moment, then speaks his thoughts.
"Life is both simpler and complicated, people can communicate easily, but they remain distant to each other." He pulls his cell phone out of his pocket and mimics the mesmerized user. "How can a family take a holiday to such a beautiful place as my bay and sit looking at their cell phones?" he asks. Bilal slides his cell phone back into his jeans and shakes his head.

Like Bilal's striking life changes, Turkey is a juxtaposition of old and new. Layers and layers of history beg to tell their story while new age technology zooms along and is fully embraced (perhaps with the exception of You Tube for the moment). With every glance there is the old, the very old and the ancient mixed with the recently new and the brand new. Turkey is in a fine balancing act - perhaps even at a turning point- and its people such as Bilal will decide which path it will take next. 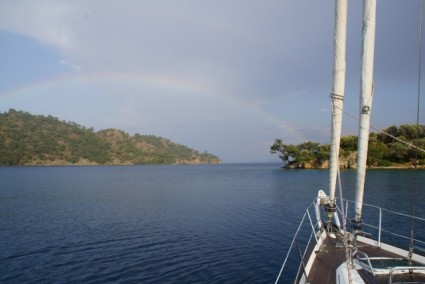