With Paikea Mist safely secured to a lovely little dock at the Yacht Mola Restaurant in Boznuzbuku Bay, we settled ourselves and our bags into the back of the taxi. The taxi driver skillfully twisted and turned our way up and up, along the dirt road, slowly making our way out of the steep valley to the local bus stop off the highway that links Gocek to Marmaris. We were about to start our first inland adventure, and we were both looking forward to exploring the 'other' side of Turkey. Cruising the Turkish coastline is beautiful, but exposes you mainly to the more affluent and western resort towns. We were really looking forward to experiencing what many of our cruiser friends told us would be the 'real side' of Turkey. 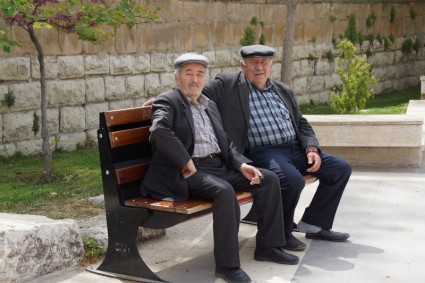 These two lovely gentlemen were happy to have their photo taken- old friends just sitting and watching the world go by. Older men especially seem to do alot of this in Turkey 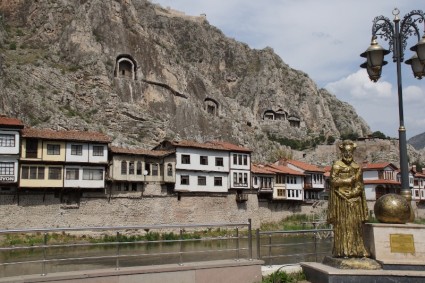 The first week of our trip was a guided tour with a group of cruisers and was a lot of fun. Marmaris Bay Cruisers, headed up by Gwen on 'KW' is a great resource for economical tours throughout Turkey. Our trip was 7 nights and we were joined by 6 other couples along with our tour guide Tas. We flew into Ankara, the capitol of Turkey. Many people might guess that Istanbul is the capitol of Turkey, but Ankara was a town of 30,000 in 1923 when Ataturk declared it as the capitol of the newy founded Replublic of Turkey. Now a city of 5 million, Ankara is definitely on the map in more ways than one! 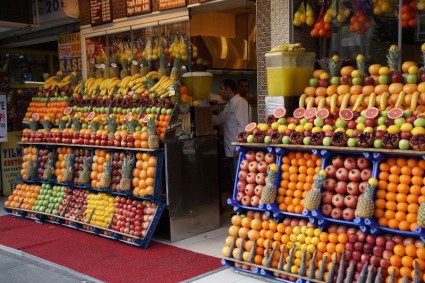 A colorful juice bar is a welcome sight after a long walk!

We loved the vibe of Ankara, and wished we had more time to explore the city. Many times we saw women wearing traditional head scarves and beautifully fitted full length coats walking arm in arm with friends dressed in high heel and tightly fitted office attire, usually above knee skirt suits. To us all of this this was simply fascinating, we really got the feeling that basically anything goes here! The architecture was also intriguing; crumbling Ottoman era homes lay beside brand new and soaring apartment blocks, back lit in neon in the night sky. There is apparently no shortage of government money in this town! As we traveled towards its center the first night our driver informed us that the impeccably smooth four lane highway was heated all the way from the airport to the town center. 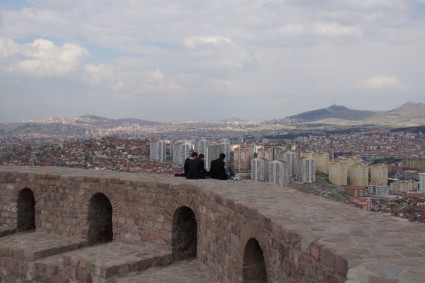 View of Ankara from the top of the castle 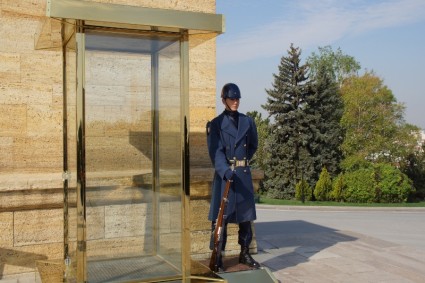 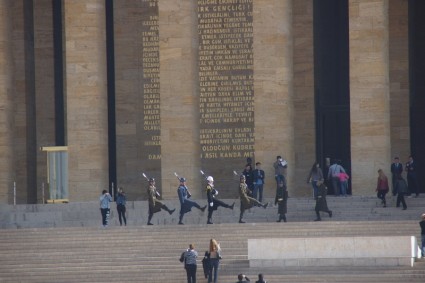 In Ankara we visited the Ataturk Mausoleum which we really enjoyed, especially the museum attached. The changing of the guards was interesting as well, straight out of Monty Python's Dept of Silly Walks.

From Ankara we traveled east heading towards Amaysa, with a fantastic side trip through the Hittite ruins of Hattusa, an ancient site (capitol of the Hittite empire a scant 3000 years ago) sitting on an undeniably picturesque rocky mountainside. Here we enjoyed the well preserved reliefs found on the nearby cliff walls and the impressive city gates as well as the curiously long tunnels cutting through the man made hillsides. An interesting factoid of Hattusa is that Hatussa is the site of the first peace treaty ever written (between the Hittite King Hattusili 111 and his Egyptian counterpart Pharoah Ramesses 1) - yet another example of how the more things change, the more they stay the same. 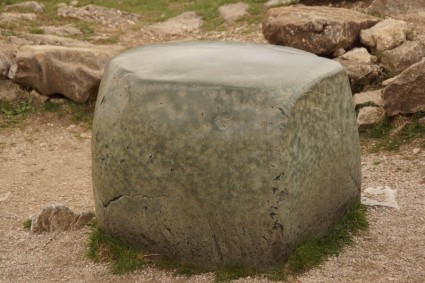 The incredibly smooth green nephrite rock in the center of the temple is thought to be a significant role in their religion, one that worshiped over 1000 dieties!

With more interesting stops along the way we eventually made our way to the stunning city of Amaysa, located in a dramatic Green River valley, abutted by steep mountains to either side, one perfectly capped by a medieval castle and a huge Turkish Flag. Our hotel was perched high on the mountain side above the town, looking out to the castle across the valley. That night we were treated to a spectacular thunder and lightning show.

In the mornings, high above Amaysa, Michael and I discovered a stunning run along the side of the steep mountain, making our way along a small dirt road that backed onto old homesteads and came upon sharp turns with vistas that reached forever across the valley, the gentle morning shadows accentuating our experience. Later in the morning the entire group hiked up through the castle walls and to the top of the lookout amongst the old ruins. 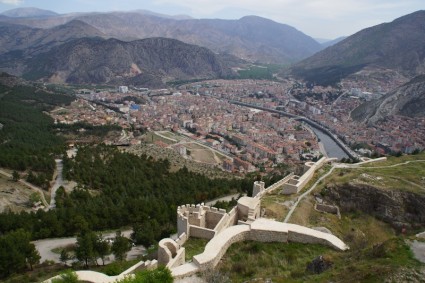 Looking down to the protective ancient walls below felt like you were in a film set!

Our next stop was Sinop, the most northern tip of Turkey along the Black Sea. Here we enjoyed the seaside ambience of a beautiful boutique hotel with a balcony overlooking the Sea, and in the morning a stroll along the quaint waterfront dotted with small eateries and fishing boats. The meal at the Antik Hotel that night was a wonderfully delicious Black Sea Salmon-nice thick white flesh- we still don't really know if it was really salmon, but it was a delicious meal regardless! 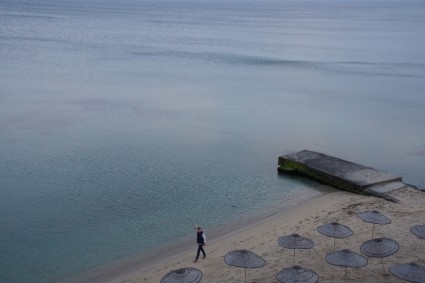 View from the Antik Hotel, Sinop. All calm on the Black Sea today! 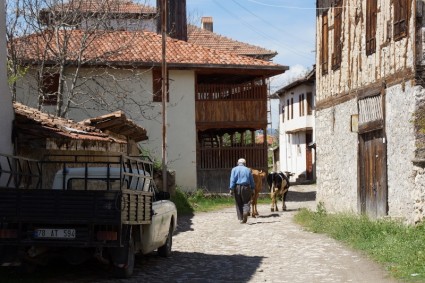 Stepping back in time in Safronbulu 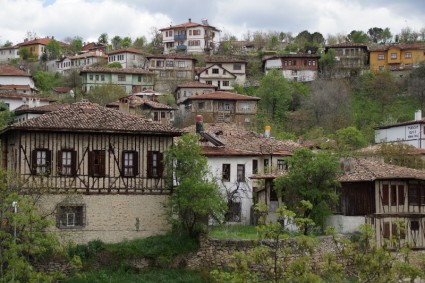 Our loop also took in Sanfronbulu, a beautiful little town with several restored Ottoman homes. We were able to take a tour of one of the homes which was a real treat. 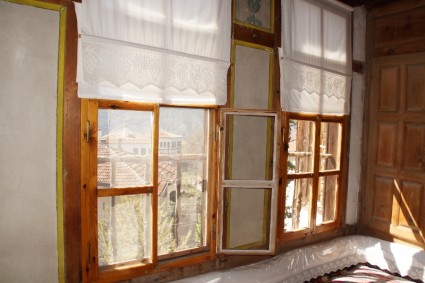 When the group returned to Ankara to fly back to the coast, Michael and I picked up a rental car at the airport for another week of exploration. With our sites on an extended trip in Cappedocia we said good bye to our new friends, both happy and sad to leave them! Hopefully our paths will cross again!

After staying at a beautiful hotel in Ankara for the night we were off to an early start to make our way to Cappadocia. As we travelled across the flat farming plains it was hard to believe that there could be anything extraordinary ahead of us. But indeed, before we knew it we were amongst the most exquisite land formations, and marvelling at the 8th century churches and cave homes carved into the dome like fairy chimneys. Some historians believe that humans can be traced to as far back as 8000 years BC in these areas. Wow, now that's ancient! 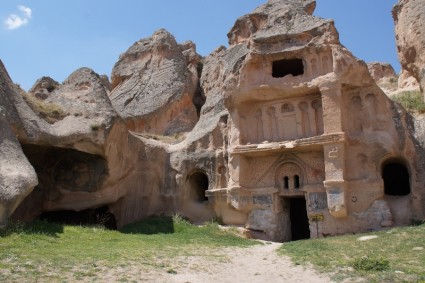 Witnessing our first cave church in Cappadocia was a sweet surprise - this was a totally non-visited site we just happened onto along our way!

We had arranged to stay at 'Viv's Place" in Urgup. We were given her contact from another cruiser and what a great tip this was (Thanks Juz on SV Misbehaving!). Viv and Will are a Kiwi couple who are also cruisers. They are both salt of the earth type of people, and from the moment we swung the gate open into their cave Shangri-La there was no looking back. One of the highlights of staying with Viv is her early morning walks. 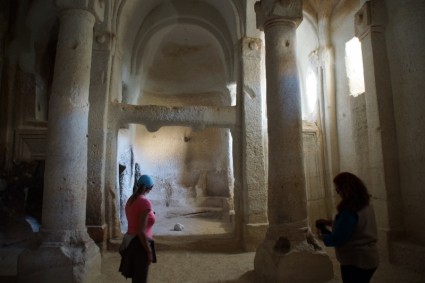 A stunning church cave is completely hidden from outside- thanks to Viv we got to climb inside to see it!

Every morning at 7 am sharp Viv is waiting at her gate ready to lead who ever turns up! The walks were fantastic, especially as the balloons were often overhead, and the trails completely void of other people- something a bit hard to find in the thickly toured area. Dropping us off at the head of the trail, Will would then coordinate a pick up spot at the end an hour and a half or so later, and from there take us back for a scrumptious breakfast, where he would dish out perfectly cooked eggs alongside advice for a well-organized day tour. Taking us to off the beaten places was a great way to see this amazing area. After a day of exploring we would return for sundowners on their high deck overlooking the village of Urgup before walking down for a bite to eat for dinner in the small town square below. 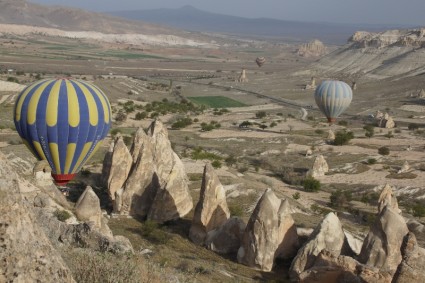 Early morning balloons above us were an unforgettable sight. 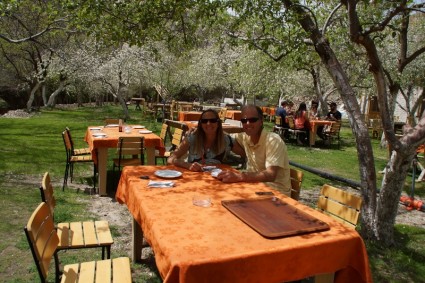 
Living for five nights in a cave was a new and once in a lifetime experience. The rooms are carved out, leaving a beautiful chiselled pattern on the walls. Our living area was spatious and included a small kitchen, a living area and a bedroom. We also had a private terrace with table and chairs to laze on while sipping an early morning coffee before Viv's walks. A painted rendition of the 'Last Supper' on the wall of our terrace was also a nice touch. The cave is cool and dry, the inside temperature doesn't fluctuate much between summer and winter, meaning that there is no need for air-condiitoning in the summer, and heating expenses in the winter are also lower.

After taking everything including the must do balloon ride and the jaw-dropping maze of the underground cities we eventually ran out of our allotted time. With a final goodbye to Viv and Will we left for our trip back to the coast. With a pleasant stop in the lake district of Egirdir our trip was complete.

Paikea Mist was no worse for the time alone, sitting pretty dockside waiting for us. The dock has an incredibly huge water hose which puts out a tremendous spray of fresh water, so after a thorough wash down we headed out to the anchorage, and back to our life afloat! Ahhh! Feels so good to be back home again!
Comments
Newer Older
Contents