The magic of Symi Island, Greece

After a fabulous catch up cruise along the Turkish Coast with our old South Pacific cruising buddies Alan and Alison of 'Fly Aweigh' we took our Turkish cruising log and checked out of Turkey in Datca. The Turkish coast has been fabulous to us this spring, but our 90 day visas would run out before our flights back to Vancouver in June, so off we went, a whole 12 nautical miles to Greece!
(BTW-We can recommend using Datca to clear out- simple and inexpensive at 60 TL)
Now, we were pretty sure we were in Greece when we saw this: 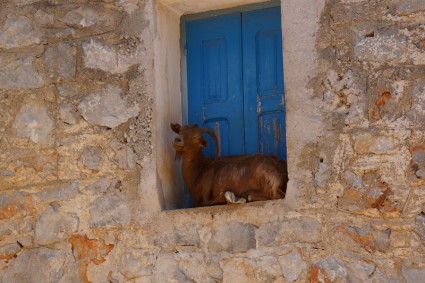 And she wondered why she couldn't open the window!

Even before we arrived in the Mediterranean cruisers had told us about the magical island of Symi, so we had a high expectations, simply put- these expectations were easily fulfilled. Nisos Symi is gem of a Mediterranean island by any standards, and we ended up spending a total of 5 (maybe 6?) nights there. 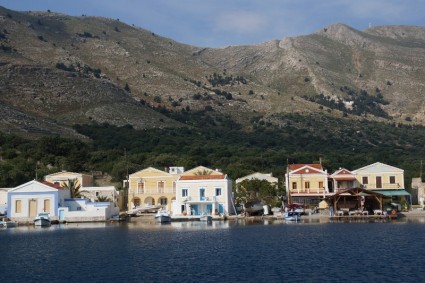 Pedhi had one taverna on the beach, great retsina and moussaKA enjoyed by all!

We chose to anchor in the less crowded port of Pedhi, which turned out to be the perfect solution for us. Winds were strong on some of the days, but this precious little port was as calm as could be. We loved the gentle rhythms of the locals as they went about their chores and daily routines in the small village, which had just enough going on to keep it interesting. 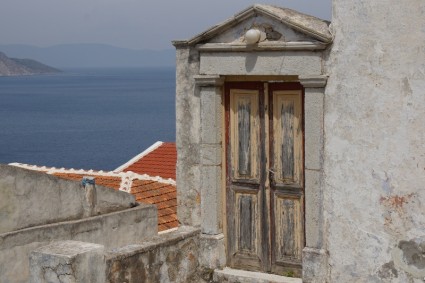 From Pedhi, we hiked over the hill to enjoy wonderful vistas of the picturesque harbour town of Symi. Old mansions mostly built in the 18th century take rise up the steep slope that soars from the small but touristy harbour. The old homes are in various states of repair, from masterfully renovated to crumbling relics. Wandering through the steep laneways and steps gives you a picture of what this town must have been like in its hey day when the islanders made their money from ship building and sponge diving. 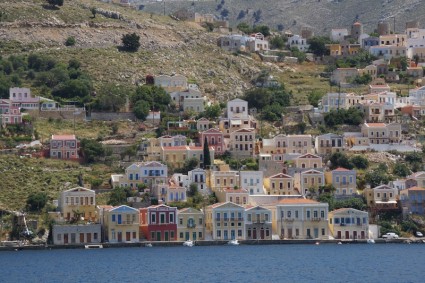 One day we rented scooters and scoured the islands high passes and windy roads, enjoying the spectacular views, great food and cold beers at the end of the day. Throughout the island there are signs of WW2 bunkers, when Symi was held for three years by German forces, and a plethora of monasteries! Such is the juxtaposition of life. We spent our last night anchored in the small bay of Panormitis in front of the famous old monastery. Our morning run was up the hill (way up) behind the monastery and took us into the most beautiful pine forest on the mainly dry island. 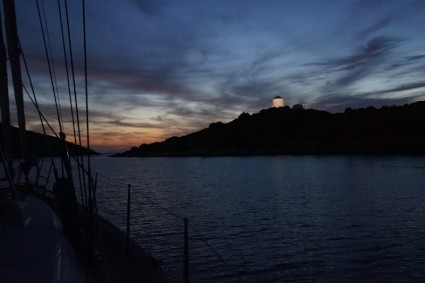 Don't you think Van Gogh would have loved this? Night sky and windmill off the headland at Panormitis

From Symi we made our way to Nisos Tilos. On the solid advice of another cruiser we bought the island map and spent the next three days exploring Tilos, mainly by foot but also assisted by the local bus in order to do one way hikes. 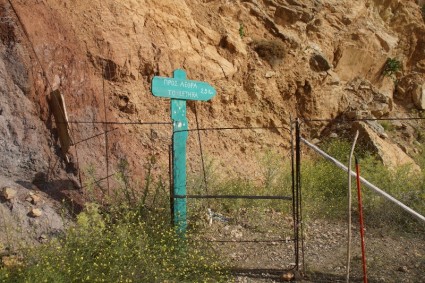 We often hear cruisers comment that every Greek island is a bit different from the next, and Tilos is no exception. The island is almost entirely terraced up its steep mountainsides, clear evidence of intensive and challenging cultivation that has since been abandoned. As we walked along the trails that link one hamlet to another across the island, we couldn't help but wonder in amazement at the incredible stamina and work effort these early Greeks must have possessed. 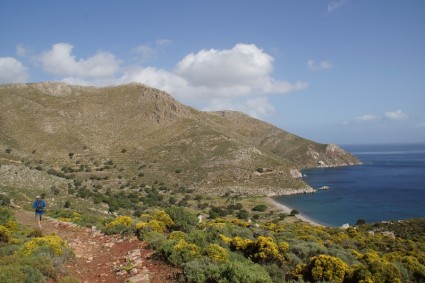 The trails of Tilos are easy to find and fairly well marked, and the map gave us an idea of how difficult they might be ahead of time. 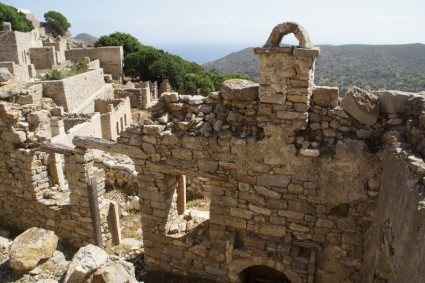 Mikro Horio- a nice surprise on our first day out

Wandering through the mostly abandoned Mikro Horio was a highlight, catching ghostly glimpses of goats wandering through the ruins of the old Greek stone homes gave a powerfully eerie feeling to the ghost town. No doubt many villagers lived and toiled their entire lives within a few miles of this town. A local told us that Mikro Horio was only abandoned in the 50's when many islanders left Tilos after the second world war for new lives abroad in America and surprisingly,Germany.

The massive cauldron of Nisyros - 2 1/2 miles across, far left shows small village of Embrios perched on the edge

Our next island hop was to the volcanic island of Nisos Nisyros where we med tied in the town harbour of Paloi. In order to do this I had to overcome a serious fear I have of shallow water! Yup, that's right. The mere idea of sailing across oceans -bring it on! Entering a small port with known depth issues, yikes- I am trembling in my boots. We first anchored off, as we had heard last year it was too shallow for our draft, but that they had been dredging. We used the depth sounder on our dinghy to determine the shallow point on the entrance (bar of about 7'2 to 8' part way through) and which side to come in. (Close to the jetty rocks is important- shore side silts up and gets shallow quickly). Once in the harbour we enjoyed a depth of 11 feet! Loved that! We tied up and secured a rental car to drive up to the volcano, and about an hour later found ourselves walking across a 20,000 year old cauldron. The volcano is still active (1/5) with small steaming sulfuric vents and some boiling mud baths in the middle. From the cauldron, mountains soar up on either side to find two small villages perched on the edge, each with its church on the highest mound, positively a marvelous sight. The next morning was Sunday, and with church bells clanging we enjoyed passing our time sitting in the tiny main square of Nikhia, watching as people came out of the church and joined each other for a visit and coffee in one of two tiny coffee shops. Lovely!

We are now anchored off the more popular destination of Kos, where we will pick up our next set of friends the day after tomorrow for some more Greek Island sailing.