The wind buffeted the sides of our small rental car as it steadily wound up and down along the dirt and loose gravel road towards our destination. We had left Paikea Mist secured in the Ece Marina at Fethiye, with a storm approaching packing winds predicted to be 40 knots in open waters, we were happy we had made the reservations in this protected corner, allowing us to explore the marvelous area around Fethiye without worry. Or so we thought.

The day before we picked up our friends Bev and David and coasted into a perfectly calm marina to med tie. It was hard to believe it was going to blow, even though the storm had been predicted unwaveringly in advance for almost a week. Even when we left for our day trip there was still no sign of the weather to come. Thinking all was well and secure, off we went to explore! 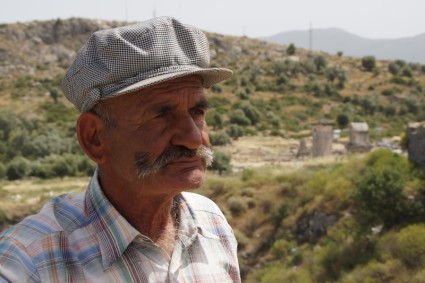 Our first stop was the ancient site of Xanthos, the Lycian capitol from 600 B.C. (or so). Complete with unique pillar tombs, laid water pipes, shower facilities, and a swimming pool with toddler section there was proof aplenty of a civilization that was well developed and enjoying the finer things of life. We took our time through the ruins, guided by a nice old local man who gave us lots of detailed information about the people who once called this place home, pointing out Lycian, Roman and Byzantine city walls that lay side by side. Xanthos has one very peculiar claim to fame in history. Not once, but twice, its population committed mass suicide by jumping off the cliffs into the Xanthos river far below when besieged by enemy forces. When the Lycians were granted independence from the Romans around 160 years B.C., the Lycians formed a democratic union between the then independent city states and called themselves the Lycian League. Thousands of years later the US of A would base their constitution partially upon this early democratic example.

From Xanthos we set out on the next part of our adventure -lunch. But not just any lunch! From other cruising friends we had heard of a wonderful restaurant which sat high in the mountains overlooking the sea, where the food came as highly recommended as the views. Though we asked, no-one was able to give us more clues than this. We googled until we finally found the Lighthouse Restaurant in Yediburunlar. We put the name into our trusty off line navigation program (Navfree- Turkey) and away we went trusting technology yet again. "Turn left", "bear left" the lovely British voice of the nav program politely directed. Are you sure we thought? But on and on we went along small roads with sweeping vistas to the whipped up sea below. The final stretch was on the windward side of the cape, down the pitchy dirt road that I've already mentioned. It was anybody's guess which was causing the most jostling on the car, the high winds or the bumpy road.

When we came to the Lighthouse Boutique Hotel the gate was closed, and for a moment our hearts sunk thinking that our trek was in vain, as we had heard she was only open part of the year. Over the course of all our travels, we have learned to continue on, until the answer is a definite no, so we ventured through the swinging gate and knocked on the door. To our delight, the owner, Semi answered the door with her bright smile and quickly assured us that she was open for business. When she asked if we wanted to order from the menu or have her choices, we went with what she knew! And boy does she know her stuff.

Course upon course of delicious vegetarian dishes were beautifully laid out in front of us, each one delicately flavored to perfection. As we devoured one delicious dish after another we were in the perfect position to watch the full force of mother nature once again. It was simply stunning to watch as the wind screamed over the seaside mountains in giant williwaws that pushed water up in a white frothy mass which then spread steadily in an ever increasing fast path across the bays below. Far in the distance the sea looked nothing less than formidable. Enclosed in the protection of her veranda we watched in awe - now this was definitely the best way to enjoy a storm!
(Lighthouse Restaurant can be emailed for reservations or directions at leonhitge@hotmail.com. They have 11 rooms and are right on the Lycian trail. Complete with a yoga studio, this would be a fantastic get-away for the hiker or yoga enthusiast or cruiser in search of a great outing). 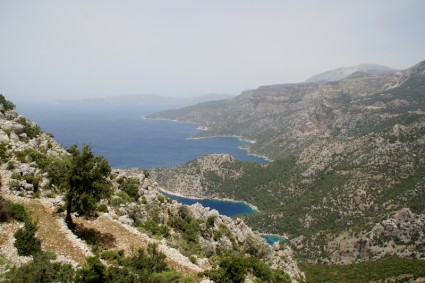 view from the Lighthouse Restaurant from the terrace

From the Lighthouse we continued on to the famed Saklikent Gorge, peaking into its narrow canyon as we turned the corner into the parking lot. We climbed into our water shoes and bathing suits, and up to the gates we went. To our disappointment the gorge was closed due to the high winds, rocks were falling down into the gorge. We had a sad look at the 'gorgeous' gorge through the wired fence, and continued on our way in the increasing heat. Back on the road toward Fethiye we saw a sign to a waterfall. Determined to 'make lemonade out of lemons' off we went. The large commercial signs at the head of the water falls almost turned us back, the last thing we wanted was a commercial experience, but to our pleasant surprise we climbed down into a dripping wet, vine draped gorge with a fresh stream running through it. Now we are talking,! Cool running water to set your feet into on a hot day. The only commercial aspect was a perfectly well positioned local woman who rented water shoes to anyone who was not fully equipped (Michael). Through the river, up small wooden ladders, over rocks and other obstacles we went - it was a lot of fun making our way up to the water fall. The refreshing spray was just the right amount of water to comfortably stand under for a thorough showering off. On our way back we stopped for a cup of Turkish tea from the shoe rental lady before heading back to the car. Bliss.

We decided to bypass the last outing on the list- it was already past 5 o'clock and we thought we might as well end the day on a high note. When we got back to Paikea Mist the professional crew on the Turkish owned catamaran SY Eser (Lagoon 57) beside us told us that while we were away Paikea Mist's stern had begun to creep back towards the dock (the mooring line had not been snugged up enough for the high winds). They tried to pull us forward, but with the high winds they needed to turn on our engine and drive the boat forward in order to shorten up the mooring line. We were so grateful that they went ahead and moved our boat for us and kept her out of danger. This med mooring business is still a bit knew to us, but we won't make that mistake again. Thankfully we had been conversing about off shore passages with the nice captain before we left, and we think this helped too. He was all smiles when Michael brought him back a six pack of cold Efes (Turkish Beer) as a thank you gesture. All in all, a perfect ending to the day.
Oh yes. What a day, what a country, and what amazing people these Turks are. 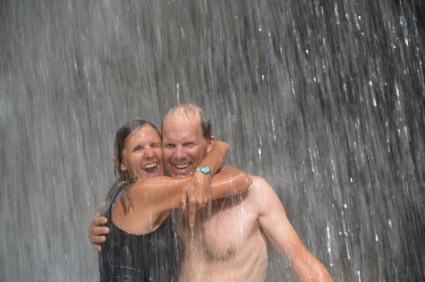