Ode to Our Shores We had barely touched down in Vancouver before we were repacking our bags for our next adventure- this time aboard SV Asunto, our daughter and son in law's beautiful 50' Catalina Morgan. Asunto is their live aboard home which also serves as a platform for all sorts of fantastic west coast adventures. With our son in law Kolby away for a weekend of sailboat racing, the newly appointed Captain Kristine arranged to pick us up along the sea wall in front of our apartment to take us out to Asunto, securely anchored in Vancouver's majestic inner harbour. Framed by rugged mountains and cityscape the inner harbour anchorage is a particularly beautiful but very busy place! Around Asunto, miniature and brightly colored tug style passenger ferries crisscrossed paths while crew laden dragon boats soared past under full paddle as the cox called out their strokes. Scads of other outdoor enthusiasts were meandering through the harbour on paddle boards, canoes and kayaks. The people friendly Vancouver waterfront stretched in front of us. The waterfront is completely wrapped by a foot and bike path and literally miles of park. Along this waterfront a constant and steady wave of walkers, runners and cyclists streamed by, all actively enjoying the long summer days.

At 49 degrees north, there was still plenty of daylight hours left when we weighed anchor shortly after six that evening to head out to the nearby islands. The BC coast is littered with marine parks, and just at dusk Kristine expertly anchored Asunto between several other boats snugged into Plumper Cove Marine Park on Keats Island.

Still acclimatizing to the time change, Michael and I were surprised when we woke up the next morning before the baby! That wasn't the only thing that surprised us, we were enthralled by these diverse west coast waters once again, and found ourselves marvelling over the small things we probably took for granted during our decades of plying these cruising grounds.. We just couldn't believe the colour of the water, a mixture of brackish brown and deep green black. While familiar it was certainly nothing like the clear blue waters we have been cruising through aboard Paikea Mist for the past five years. Despite the colour, or maybe because of it, the shoreline and waters are blessed with a plethora of life. As the early morning low tide exposed the intertidal wealth of bright green seaweeds, craggy barnacles, mussels and oysters, the brackish water constantly lapped against the hull, carrying a wide variety of once live specimens, now flotsam homes for yet more life to hide amongst, thrive and grow. Even the resident seals entertained us as they actively fished around Asunto. Such curious creatures, popping their dog like heads out of the water to stare at us through their round watery eyes. This perfect mixture of simple yet abundant natural wealth defines our wonderfully wild west coast.

In light windbreakers we headed out for an early morning hike on the trail that loops above the camping grounds through the lush rainforest. Michael and I have often remarked that the coast of Turkey reminds us of our west coast, but we obviously forgot a few things. Like the lush, tall green ferns uncurling themselves to reach upwards towards the canopy, the thick creeping moss that carpets the forest floor and completely covers huge boulders, and the layer of thousands of years of moist decay that forms a delightfully spongy feel underfoot. Huge logs lay everywhere, some ancient and others newly fallen, randomly tossed here and there by west coast gales and winter storms. One of these huge cedars lay succumbed on its side, it's mammoth root system freshly exposed to the world, ready to provide a new home to a diverse number of small forest creatures.

Before long we were wrapping our jackets around our sweaty waists as we hiked high above and then back down to the water's edge, where we discussed our next destination and sail plans with our Captain. We were excited - the southerly wind forecasted suggested a long downwind sail along the Sunshine Coast to our next destination of Jedediah Island. We motored our way over the shallows off Gibson's Landing and hoisted our sails. The 15 -20 knots of wind behind us made quick work of the almost 30 nm run providing us with one of those 'door to door' sails that defines perfect sailing.

With the anchor set in White Rock Bay we went ashore to rediscover Jedediah Island. Jedediah is my absolute favourite island on the BC coast, and for good reason. With a whopping 243 acres, the island is the biggest marine park island on the coast. Jedediah has a rich history of homesteading, and was owned and actively farmed by the Palmers since 1949. When it became evident that the Palmers may have to sell the island in the early 90's a truly "this is beautiful BC" story emerged to save the island from the logger's axe or the miner's drill. After a concerted effort by her owners, especially Mary Palmer, a substantial donation from the family of the late Dan Culver (Canadian adventurer and climber) and the unending and enthusiastic endorsement and fundraising of nearby residents of Lasquiti Island, the island was finally protected in perpetuity, and became a BC Marine Park in 1995.

Today, large stands of Cedar and Douglas Fir trees still grace Jedediah where a nice set of trails leads from the rocky and deep anchorages to the old Palmer homestead. Walking through fields of cherry, apple and pear trees is a true delight. Their old home still stands overlooking the shallow waters of Home Bay. Inside the barn, farm tools lay against machinery, appearing as though someone might come and turn the soil over at any time. Through the tall grass of the abandoned fields flocks of heavily coated sheep still wander, Canada Geese land on the the nearby grassy knolls, and we stroll happily through it all. How I love it!

One of the amazing things about cruising the west coast is the diversity of well protected anchorages, you can cruise here an entire lifetime and never see them all. When our swing room became too close for comfort to a power boat who was hogging the small anchorage on what must have been a very long chain, Kristine took us across to Boho Bay, another gorgeous and well protected anchorage within sight of our first. We were delighted with this calm gem, with a series of rocky islets at the entrance and sheer cliffs capturing the far side of the bay. We were soon happily anchored once again, and exploring the waters on their paddle board. What a surprise, after all of our years stopping at Jedediah we had never explored Boho before. 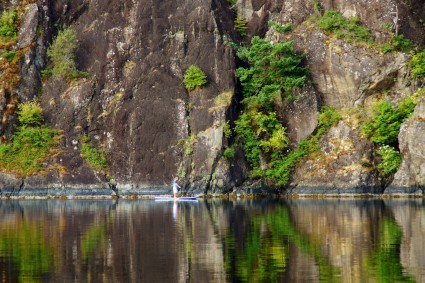 Michael is dwarfed against the high cliffs of Boho Bay

From Boho we sailed our way to Lasquiti to pick up Kolby and discover the Finnerty Islands, where our previous observations of natural sea life were dwarfed. These islets off the top of Lasquiti Island were positively teeming with sea life, and with Asunto snugly tucked in behind a ring of small islets we felt very privileged indeed. That morning as we drank in the warm sunshine in the the cockpit, we watched a bald headed eagle take flight from a nearby rock. As he did a single feather dropped from his tail and slowly drifted to the water. Pure magic.

The next few days we were astounded to find ourselves blessed with more downwind sailing, even including a spinnaker run all the way back down to Nanaimo, where we dropped the 'boys' off to start our 'all girls' portion of the trip. After some shore explorations of Piper's Lagoon, and some friendly and interesting discussions with the squatters in the old whaling shack community there, we motored out of the bay just long enough to hoist sails. As the sails filled with wind and Asunto responded, we gave each other a high five, thrilled to have the boat to ourselves, especially under full sail. As I got my exercise trimming the sails, Kristine set the boat on course, all the time with baby Fynn safely snuggled inside her comfy back carrier. We zoomed across the Georgia Straight on a fast moving broad reach making up to 8 knots all the way to Pender Harbour. 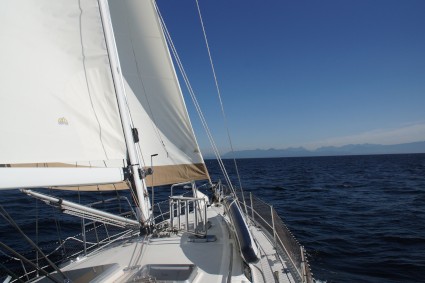 Asunto under full sail across the Georgia Straight


Seen from above, the all weather anchorage of Pender Harbour resembles an octopus, 1 1/2 km deep it offers over one hundred km of shoreline! We snugged into the protection of Gerrand Bay and took advantage of the infrastructure to reprovision our fresh goods as well as stretch our legs. Round about then, Fynn decided it was time to crack open a new front tooth, and morphed from her normally smiling adventuresome self into a clingy, whiney baby glued onto her mother's side like a barnacle clings to a rock. Poor Fynn, and poor Kristine. There was little respite I could provide for Kristine as Fynn struggled with a very painful looking eruption of her front tooth over the next few days.

With the baby clearly under the weather, we took the opportunity to stay tucked in an extra day in the scenic bay of Musket Cove Marine Park. Just as we prepared to anchor Fynn woke up, so we were more than grateful when we saw a friendly sailor in a dinghy coming our way with an offer to help secure the stern line. Even with the extra help, it felt such a feat to complete this anchoring technique in the deep bay successfully. Later Kristine secured a second line around a large boulder to improve the stern line setup even further, as well as made a quick batch of delicious oatmeal chocolate chip thank you cookies for our new and helpful friend. I was beginning to realize the new captain was taking on her new role in stride. 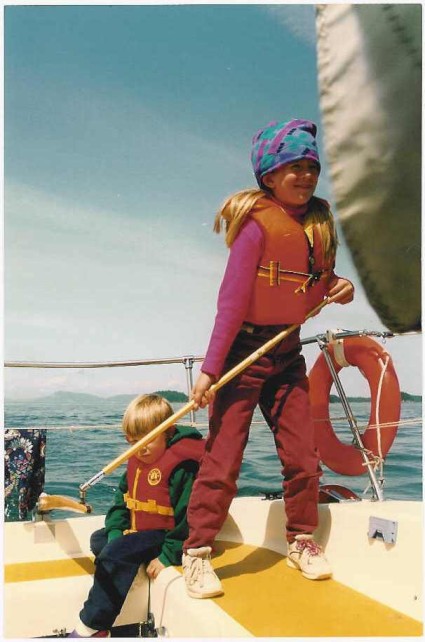 I guess this boating thing is nothing new to Kristine- even as a little kid she loved taking the tiller of SV Spectrum- our first boat!

Over my last three days aboard SV Asunto, Fynn slowly returned to her gorgeous, rambunctious self with one more tooth framing her now happy grins. Even more thankfully she began to enjoy her Gramma's arms again, and we had tons of fun playing together in my cabin, on beach walks and just hanging out. On the sandy beach near Comox I swung a giggling Fynn through the thigh deep stands of seaside grass and carried her on my hip under the tall windswept trees. We stopped to taste test wild sea 'asparagus', and turned over barnacled rocks to watch bewildered crabs scatter this way and that.

I will always relish the magic of sharing this special adventure with my wonderfully accomplished daughter and delightful grand daughter, heightened spiritually, physically and emotionally by the beauty of the Pacific North West.

Five years ago as I left these cruising grounds on our own Paikea Mist I wrote the poem "Paikea Mist's Ode to Our Shores"- you may have read it at the top of our blog.

With complete gratitude and a sense wonder rekindled, these waters have brought me home again. 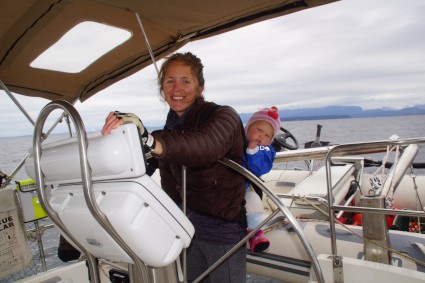