Whether or not we would have Turkey for Thanksgiving was not in question- we were already in Turkey! And as for giving thanks, there is little doubt that we have oh so much to be thankful for. While our friends and family feasted over the Canadian Thanksgiving weekend, we enjoyed a not so traditional Thanksgiving in Turkey with our one year old granddaughter aboard, along with her mom and dad of course. How wonderful is that?! We feel incredibly fortunate that her parents would go to the effort of making the long trip to Turkey with the wee one in tow.
The young family flew from Vancouver through London to Istanbul and on to Antalya where we had a driver arranged for them for the 3 hour drive to Kas. They arrived somewhat bleary eyed just as the sun was rising over the Kas Marina. By the afternoon, they were enjoying the Turkish Haman bath we had arranged for them at the marina's spa. That left us to enjoy our granddaughter - a win- win. If they weren't tired enough already, that evening we walked to town for dinner and back via the amphitheatre. All three collapsed into bed upon our return to Paikea Mist that night.
The Kas Marina was a great place for them to acclimatize themselves to Turkey, with access to the sea and a fresh water pool for swimming. 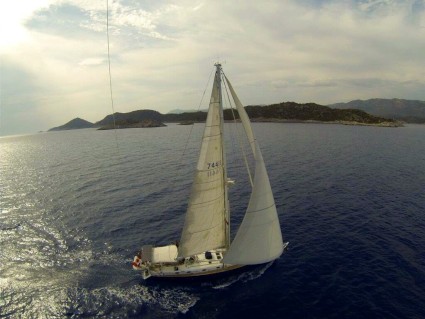 But it wasn't long before they got itchy feet, and we set sail for the local anchorages. One of their favourite stops was on the small island of Kastellorini, where the Greek flag flew above the fortification at the headland of the colourful inner harbour. With calm weather we were even able to anchor off the Blue Lagoon to explore its brilliant azure waters sparkling gloriously by the strong Mediterranean sunlight which shone in through the low -lie down in the boat -entrance. Inside the caves, splashing produced silvery, iridescent bubbles and Fynn was wide eyed as she kicked her feet in the water to see the effects. 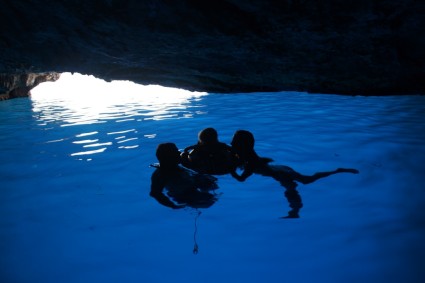 From here we went north to Fethiye. With the weather still calm and the anchor set securely, we rented a car to explore the ruins of Tloss and then the Sailinkat Gorge. 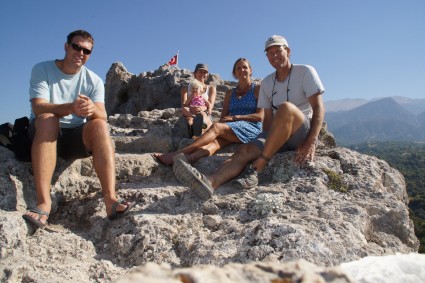 Atop Ancient Tloss-Exploring ancient ruins in Turkey is always fun, with access to any area they deem 'safe'.

Exploring the intricately carved river of the Salinkat Gorge was a fantastic adventure. The gorge is 18 km long, with easy access via a wooden walkway for the first part. From there you cross a clear cold river to start the slippery up river, a 2km trek up the gorge to the waterfalls. Most people turn around at the first river crossing, but we were amazed at the number of tenacious folks who managed to wiggle, squirm and pull themselves all the way up to the waterfalls at the 'end'. No easy feat! In places the chilly water is chest deep, and the canyon only feels colder as you climb up. When finally the towering canyon walls narrow above the height of the autumn sun, daylight changes to night. As your eyes slowly become accustomed to the dark you continue on your way, each turn twisting and winding further up narrow river gorge. The water is finely silken as it wears its way through the sandstone walls, so it looks and feels- muddy. Everything is incredibly slippery to hold or pull on. The underwater footing is never seen and each step is tentatively taken by feeling your way around unseen rocks and mud patches below. Our daughter Kristine managed to bring Fynn up in her back carrier all the way to the first waterfall. Kolby and I made it to the final waterfall, but I have to admit that I would not have been able to make the past even the first waterfall without his help. Coming back down was a gas, as you had the opportunity to slide down waterfalls and rocks that you had hauled your slippery body over on the way up. The daylight returns in degrees, along with the warmth. Back at the car we basked in the heat of the day until we were sufficiently warm to continue on our way! 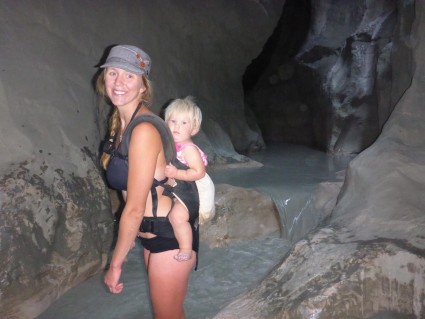 Kristine and Fynn at the first waterfall of the Salinkat Gorge

From our anchorages in Skopali Limani we enjoyed the spectacular hike high above the Cleopatra Baths where we met our helpful friend, Achmed, the goat herder who lives at the pass above 20 Fathom Bay. He waved us to his hut and brought out extra chairs and gave us cay (tea) and cookies. His view from his hut was gorgeous. After the tea, he showed us some spoons and spatulas he carves out of the local madrona (arbutus) trees, and of course we bought some! Nice enterprise- but unlikely that he sees too many folks pass his way.
We were spoiled here with several local boats bringing goods right out to the anchorages- one boat even made fresh gozleme (Turkish flat pancakes filled with potato, cheese and spinache) for us while tied alongside- what a treat. Kolby's favourite was definitely the icecream boat though!

Our times on board with Fynn were a treasure box of memories. She 'owned ' our cabin and loved horsing around with the pillows and 'reorganizing' everything else, and just 'chilaxing". Full of giggles and hugs, this little girl had us laughing out loud with her antics.
We had gone to a bit of preparation to accommodate our little Fynn aboard, but not much really. We bought some fishing net and low stretch line while in Vancouver and rigged up netting to the life lines. This was time consuming project that Michael and I completed over two days while in Kas, but we designed it in such a way that we could easily remove and re-apply it again in the future (we hope!). In our spare room Michael re-arranged our gear and put up additional netting to make a crib for her. Her mom and dad brought along a few toys, her clamp on high chair and a harness. While in Kas, we found her a floaty tug boat now known as "Toot-Toot" . Now that Fynn had her own little boat, and we were good to go! A one year old is never bored, so we didn't have to worry about amusing her on the longer stretches of passage making- instead she amused us! 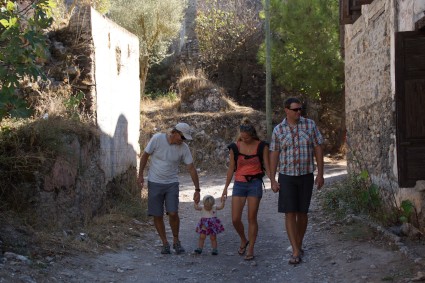 Of course Fynn sure did love the chance to stretch her feet- just on the verge of learning to walk- she has bragging rights that she learned to walk in Turkey. What a cool kid! 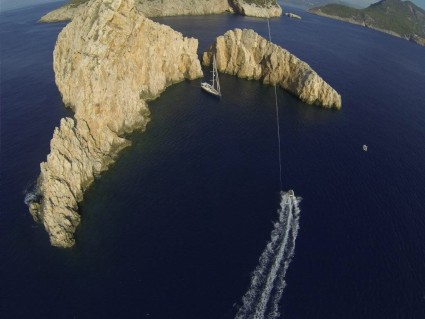 Paikea Mist anchored off a small island off the Olympos Peninsula-spectacular enough to easily forget that we had to dive for the anchor!

We finished the trip off by heading all the way down the spectacular Olympos Penisula to Kemer. On the beach near the Olympos ruins we found a small family run restaurant where we ate one of most enjoyable meals, our family spreading out on the mats and pillows while Fynn was free to move amongst us. The food here was even more delicious for that reason alone, but we also enjoyed the relaxed setting of this beach town, an obvious hippy hangout of years gone by.


In Kemer we stayed in the Marina- one of the least expensive ones we've been to- and enjoyed the hustle and bustle of this resort town. Kemer streets have a colonial feel to them, with a long pedestrian street forming the shopping nucleus, cluttered with small shops whose goods overflow into the street as their Turkish owners call out to you as you pass by. None of the buildings are higher than the mosque, so it has a nice cosy feel to it. We arrived on market day and were able to refresh our fruit and veg supply with gorgeous produce. The next day was a clothing bazaar which offered endless bargaining opportunities. From Kemer we rented a car and explored the Chimaeras- an ancient site where flames still leap from the ground, and where ancient Romans worshipped the god of fire. No wonder!
Our last trip was early in the morning to the Antalya airport, and just like that, before we knew it, the three weeks had flown by.
We are now heading back towards Kas where Paikea Mist will spend the winter months. We have cleaned up the boat, but have left a few sticky little hand marks on the walls to remind us how special life is, and just how thankful we both are.