The boom of thunder that reverberates out over the Acropolis of Lindos is deafening, a sure testament to the power of these Greek gods! From our lovely and delightfully simple apartment overlooking the Lindos Acroposlis and amphitheater, we soak it all in, including the shorts bursts of torrential rain and enjoy!

From the patio, we watch the neighbours come and go with friendly "kalimare's" in the morning. We catch aproned moms performing everyday tasks, simple things like hanging their laundry out (now soaking wet thanks to the aforementioned gods), while young kids play amongst their legs in their patios. As night falls, we listen to the kids playing wildly enthusiastic games of soccer and singing songs in the town centre.

The locals of Lindos are a relaxed gang, but well practised in greeting the tourists warmly, helping with directions, or recommending the family taverna. The numbers of tourists here are beginning to dwindle as the season wraps itself up in the wet wintery cloud. Never mind the change of weather- we simply wait out the rain burst! The sun returns quickly and still has plenty of warmth to offer. This morning we hiked up to the towering Acropolis and had the entire hilltop to ourselves. 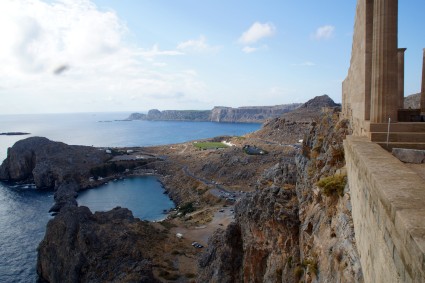 The edge of the massive Lindos Acropolis, looking down to one very protected natural port

Lindos town is a white walled cobweb of narrow lanes, drooping bougainvillea, and lovely restaurants and pubs tucked here and there. Offering four ports, it sure does seem strange that we find ourselves here, without Paikea Mist! But here's what happened:

After the kids left, we realized that we were finally finished cruising the coast of Turkey. This only took a year and a half and a mere 56 anchorages before we felt we had soaked in enough of the beautiful Turkish coastline. But yes, we finally felt fulfilled. Two places remained on our list to see in this part of the world. One was to see Pummakale (Turkey) the other Santorini(Greece). We have heard that Pummakale is best seen after the wet season, so we opted for Santorini. 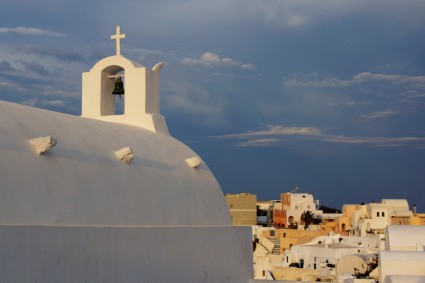 Santorini can be a difficult island to sail to, offers a too shallow port and sketchy anchorages, so we agreed it would be fun to spend some time on the island without the boat to worry about. Within 24 hours, the decision was made and executed- as luck would have it we could catch a 10 am ferry from Kas to the nearby Greek Island of Kastellorizo and catch another to Rhodes, and then onto Santorini on a third ferry! Let the fun begin! 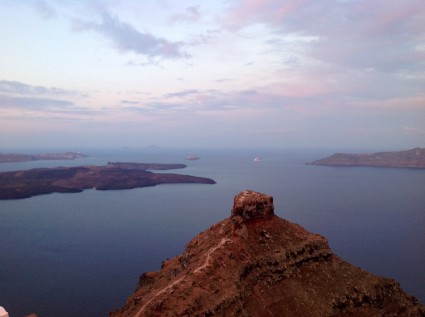 The Greek Blue Star ferries were on time and comfortable, and a heck of a lot faster than what we are used to! Cruising at 25 knots, we arrived in Santorini at around one that morning. A taxi to the boutique hotel on the cliff side and next thing you know, we are waking up in Santorini. Or was that $antorini?! Photos (being free) were the one thing we could really afford! Even still we managed to rent a car and tour all the many wonderful sites of Santorini over the next few days. We got incredibly lucky with the late season weather too, with only the last day being a touch on the windy side. One night at sunset we hiked to the Scaros Rock and watched the cliff side alight in hues of golden red. The next day we drove the spiny road that zigged and zagged up to the ancient city of Thira to cast our gaze upon far flung islands and imagine the ancients roaming the same cliff top.


Santorini is an incredible island, but really way too touristy for us. We prefer sitting here in Lindros, a cup of morning coffee in hand listening to the father below say good bye to his son as he heads off on his scooter to work. It really is the simple things, and not the glitz and glam that keeps us wanting to see more, meet more and do more.
Earlier today we had one of those chance meetings. As we were climbing the narrow steps, a sweat browed man with a rope in his hand, loped past us going up the hill to the car park. When he walked up to a lone, recumbent donkey and tied the rope around his neck, I just had to turn around to see more. With gentle, but firm encouragement, he pulled on the stubborn donkey's neck, and the donkey slowly hobbled to his feet. The blue eyed dark haired man shook his head and I watched a bead of sweat drop from his brow. " I have been looking for him everywhere!"he shares, with the shake of his head. "He is forty four years old!" he adds, an audible sense of pride ringing through his voice. "Look! See! He is getting so slow!" He went on to explain that his son left the gate open, and the old donkey ran off and proceeded to get lost. Again. When his donkey was younger, he assures us that the mule would have easily found his own way home on his own, but now (with a finger in circles to the side of his head) "he just gets lost!". A lost donkey, a sweaty but grateful man and a tug on a rope. This is everyday life in Lindos I suppose!

Our next passage is back to the small island of Kastellorizo and then the small day ferry back to Kas, Turkey. And that's island hopping in Greece!