About a year ago I was casually looking through the yacht listings on Trademe like I often do, and dreaming of having my own cruising yacht, living aboard and sailing New Zealand and the Pacific Islands, and I came upon this beautiful black Ketch with red sails for sale. That was the first time I came to know Waka Irie and Mariner yachts. She immediately "made my heart sing". I wanted her! I looked up the name on the internet and read the blog of her voyages. At that time she was still sailing towards New Zealand from the British Virgin Islands! I was sold! ... But there was one glitch ..I couldn't afford her! They were asking $30,000. which really was not much for such a beautiful looking, seaworthy, Ocean passage-making, well equipped yacht, or so I thought..(I now know better not to judge a boat by its looks only). 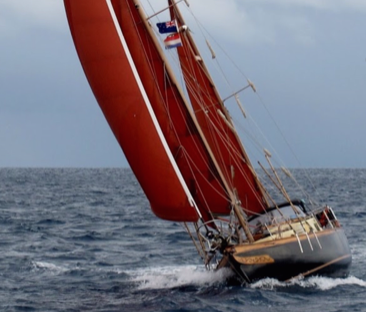 In March 2014 not long after I had discovered my dream boat, Svenja and I flew back to New Zealand from Germany (where I'm currently living) for a Months holiday. My parents live in Totara North and I had a small 20' yacht there. During our trip out of Whangaroa harbour on our way to the Bay of Islands for 2 weeks, I saw my first glimpse and even till now the last of Waka Irie! She was moored in Whangaroa, I regret not going out of our way to go up to her and having a better look and possibly even meeting the couple that sailed her from the BVI's! But at that time I only kept her in the back of my mind, because I thought it would never be a reality that I could own this lovely boat. And so the year went by: living in Germany... learning german...and dreaming...dreaming of sailing the seas that seam oh so far away here in the middle of Europe.

About a month ago I again saw Waka Irie for sale on trademe, this time at a much lower price! I was so excited, at this price I actually had the chance to buy her! but then, ya know, I'm living on the other side of the world..I'm going be be living here a few more years while I do a carpenters apprenticeship...There seemed to be many things in the way for it to become a reality.

I told Svenja about it and she was actually almost as excited as I was. She said if I had to have a boat it should be this one. So that was that, I was now determined to find a way to get her!

At the price she was selling for I was sure she needed quite a bit of work, probably the whole deck needing replacing. As I had read that quite a few Mariner 32s had had their decks replaced. So I spent ages budgeting and reading up about replacing it.

On the 5th of March, my Dad went to look at Waka Irie for me and give her a good check over and get an idea on how much needed to be done, being a boat builder her knows what to look for.
Even though Waka Irie is not his kind of boat, he was quite positive it was a good buy and not as bad as we had both expected, the decks are in much better condition than we expected and some of the biggest jobs had already been done.

So, even though I'm 11,000 miles away I went ahead and bought her! She is still sitting on the hard in Whangerei, while I try to sell Tamar (28' Joe Adams design yacht that I was given... But that's another story), to make space for Waka Irie, where she will be waiting patiently under a tent for us to come home and start work on her restoration. 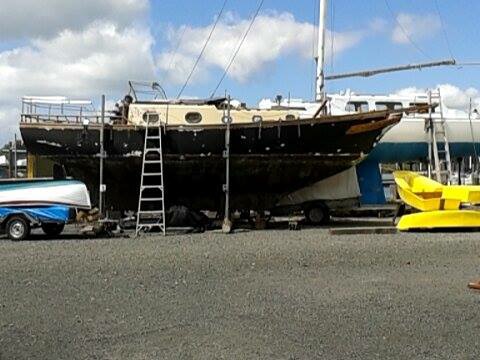