We pulled into the dock at around 11:30 with lots of fanfare at the dock. Well, a couple of old salts were there and helped us tie up to the dock. Benjamin and our friend Shelly MacLeod and her son Cameron are bringing us a car. We will wait at the dock until the customs agent comes and clears us. I think we will just nap until his arrival.
The boat performed brilliantly, taking a very hard pounding for days at a time. We have a little minor damage to repair, an anchor to replace, and some stitching to be done to the two foresails, but otherwise the boat is no worse for the wear.
This is as hard as we have ever pushed this boat, and as hard as we have pushed ourselves since we were MUCH younger! We are now ready for some easy activities more suitable for gentlemen of our advanced age.
I am thinking along the lines of cocktails and a cigar.
Please look at Chip's blog at www.sailblogs.com/member/rlt

What a NW wind will do

Well, we didn't make it before the wind shifted to the NW at around midnight. Extremely cold wind at > 30 knots, with rain like needles to the face. Beating directly into it. We had to tack and run parallel to Long Island a while, before we could tack back and try to slide by the west of Block Island. Everybody and everything is wet.
The picture doesn't fully convey the disgusting condition of the boat at this time. We are pretty sleep deprived, so we are kind of just throwing stuff everywhere. I wrapped one of the sleeping bags my wife insisted we bring around myself to stay warm, giving me a very wise Sitting Bull appearance.
After the last couple of posts, I think our recruiting efforts for the next voyage are suffering a bit.
Comments

Reward For My Hard Work

My thoughtful boatmates wanted to reward me for standing out in this crap and steering - our autopilot was making funny noises grinding away in these conditions, so it is old-school steering. I regretted not accepting their offering, as questionable as it was.
Still moving fast. Click the arrow for the video.
Comments

The wind picked up massively, giving sustained wind speeds of 30-40 knots (40-45 mph), with heavy gusts, the highest one we saw being 58 knots (67 mph). The mainsail is down, the genoa (large jib) is down, and we are flying just on the little staysail. The boat is not particularly comfortable, but it is a complete warhorse in this crap.
The waves are very large, with peak-to-trough distances around 20 feet, some higher.
Fortunately, the wind is at our backs, so everybody is in a good mood. We are trying our best to get into Long Island Sound before we emerge from the low and into NW winds.
Comments

23 May 2013 | 235 miles from home
Mike
Not much exciting to report. Cruising at about 7 knots straight at Noank, CT. Getting knocked around a bit by the waves, so it's pretty slow moving down below. Had one giant wave hit us from the side and soaked the unfortunate occupants of the cockpit. Yours truly was down below staying dry. The only excitement yesterday was seeing a large number of dolphins escorting us for a few miles. We were in an eddy of the Gulf Stream, so the water was very warm. Hoping to pull into our slip Saturday early afternoon. Looking forward to a stable walking surface.
Comments

The best I could do for a picture

Flying on a beam reach, pointed directly home. The crew is healthy except Jim, who has a touch of the mal de mer, which seems to be subsiding. Doug was in charge of the music this morning, and we listened in disbelief to the full soundtrack of the musical "Oklahoma" - Doug informed us that we were listening to the original cast. After that surrealistic start to the day, we reduced sail as the wind picked up. We have not changed our course in 48 hours. The same probably goes for our clothes. Kathy, I am sure, is looking forward to our arrival with some ambivalence as all four of us will be piling into her home - hopefully Saturday night.
Comments

We're On Our Way Home

After an incredibly delightful week in Bermuda, we decided to take advantage of a little window we had to get out with fair winds almost all the way back to Connecticut. Stalwart Wayne went home Friday and we pressed into service two more salty dogs for our voyage home. We anticipate NE winds by the end of the week so we are going to go east of our straight-line course home, so we are not beating so hard at the end. So for those of you paying attention to our course, we are not off-course. I think. A little excitement getting out today. We tried for an hour to get our anchor up, without success. We were risking tearing hardware off the deck, trying to use the boat to break it free. We finally concluded it was hopelessly fouled on something on the bottom, and was never breaking free. So, with heavy hearts we let the chain fly and said goodby to a fine anchor and 250 feet of chain. C'est la vie. Cleared customs at the customs dock, following a French family headed home and an Israeli crew heading God knows where. Looking forward to a fairly peaceful night.
Comments

Decided that we couldn't spend the whole week lying about, eating and drinking at the beach, pool, and bar. So we took the bus to Crystal Cave for a 30 minute tour. Headed straight to the White Horse Saloon after the tour. Looking like maybe a Monday departure. The island is wonderful.
Comments

The St. George Club has a little beach for its guests. It was with a great deal of trepidation that I posted this pic, but there I am in all my gone-to-seed glory with my beautiful wife, Kathy, and my good-looking boy, Ben.
It's going to be really hard to leave this place!
Comments

For his insubordination en route from Connecticut on the good ship "Road Less Traveled", Wayne is facing the traditional Bermudean punishment of "Death by Cannonball to Head."
RIP, scurvy dog.
Comments

Nothing like a family photo posed on a vintage death machine. There is ordnance all over the island - cannons, cannonballs, shells. There are at least 15 forts all with cannons pointed to the sea. As far as I can tell, there has never been even a skirmish in all the centuries the British have been defending this island, which is nice.
I love how matter-of-factly the British describe the history, e.g. "when the enslaved American indigenous population dwindled due to massacres, disease, etc., African slaves and convicts continued the work. When that population dried up, Boer War POW's were used." That of course, is totally paraphrased, but I think the gist is there.
They did a fantastic job building this island, I have to say. The entire place is beautiful, and the people are lovely.

After a night of slogging, we finally made our triumphant entry into St. George's Harbor around 6:00AM. The expected adoring crowds never materialized, so we quietly pulled up to the customs dock and cleared customs. We anchored, tidied up a bit, gathered our laundry and trash and headed for shore.
Kathy had a sweet condo rented at St. George's Club. The above picture is on the front lawn. Our boat is in the anchorage in the background, but you can't really make it out.
Looking forward to a shower, nap, shave, and vast quantities of beer and Dark 'n Stormies.

Road Less Traveled's Photos - Noank, CT to Bermuda and Back 2013 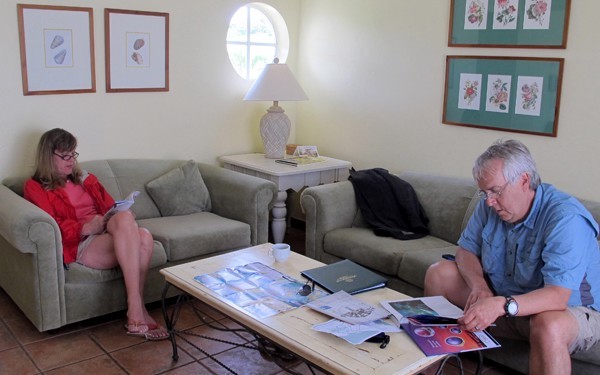