Since restarting our cruise after Christmas, our main goal as been to reach a warmer climate. We started out in Jacksonville where it was close to freezing,

made it south to St Augustine where it was just as cold, 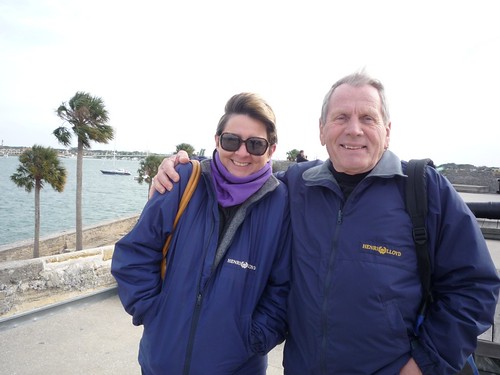 took a LONG trip further south to Lake Worth/Palm Beach in hopes of putting the freezing temps permanently behind us, then finally pushed on to Ft Lauderdale on Saturday. 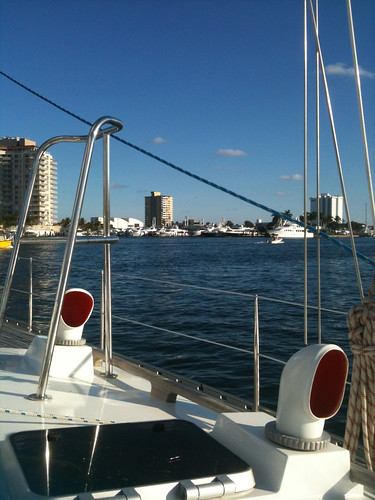 We can finally say we have escaped the freezing cold! The forecast this week: Highs in the upper 70's / lows in the 60's... Hooray!

Here's a brief run down of our adventures over the last few weeks:

Left Jacksonville on a VERY cold morning, headed for St Augustine. We had a GREAT sail and managed to get there with light to spare. St Augustine was a great city to visit and since we had a weather front forecast to come through with rain and strong winds, we made the most of it by exploring the city and working on boat projects.

During our trips to town, we visited Flagler College, explored Castillo De San Marcos, toured a number of art galleries, and walked around the old part of town.

5 art galleries are owned and operated by a wonderful family. We were lucky enough to meet the owner Len Cutter while admiring the art work of Anne Packard. She was scheduled to have an exclusive one woman show that Friday. We were going to miss the event but were lucky to see her painting as they were hanging them in preparation for the show. Anne's show: http://www.cutterandcutter.com/ap/ Watch the documentary on this page - Anne is a true American original!

Thanks to the friendly and knowledgable crew at the Cutter&Cutter galleries, I also now have a new, favorite artist! His name is Glen Tarnowski and he has been called the father of modern allegorist. I'm not at all sure I understand what that means but I do love his work! Check out some of his beautiful paintings here:

The Art of Glen Tarnowski

We also got a few boat chores done on the rainiest day. Our biggest accomplishment: pulling 50 feet of Cat5 cable from the stern to the nav station at the middle of the boat!

It was still below freezing most nights in St Augustine and not much warmer than 45 during the day. We decided to bite the bullet and make the long passage around Cape Canaveral down to Lake Worth (211 miles). Winds were stronger than predicted and we made the entire passage under sail in about 34 hours. Temperatures were warmer at our new destination but we saw a small weather window to keep going so we only stayed there one night.

Our most recent sail, from Lake Worth to Ft Lauderdale was also pretty good. We had to motor a while to be sure to get in before sundown but it was a pretty good trip. The biggest challenge? Avoiding the fishing boats! With the warmest temps they've seen in months and light winds, there were hundreds of them along the coast!

Now we're sitting happily on a mooring at the Las Olas marina in Ft Lauderdale, enjoying the mild weather and getting ready for our hop across to the Bahamas. We'll be here about a week getting a few boat things sorted out, waiting for mail, and goofing off a bit!