26 January 2011 | Ft Lauderdale, FL
mostly nice
We had a really busy and productive stay in Ft Lauderdale - we completed many projects that we wanted to finish before heading to the Bahamas: Rebuilt / repaired dingy outboard engine, went grocery shopping, did a wifi antenna installation and fine tuning, got haircuts, more grocery shopping, laundry, mail, etc, etc.... 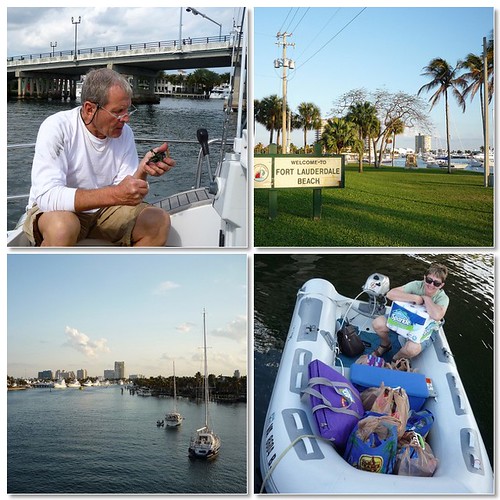 The carburetor rebuild of our small 2HP did not go as well as planned - video here (excuse the bouncy video along the canal):

We made new boat friends at Las Olas marina (Peter and Jane on Kinvara and Bob and Connie on Meredith). We all went out Saturday to help Bob celebrate his birthday. If you're ever in Ft Lauderdale stop by the Coconut Bahama's Grill for lunch or dinner - you won't be disappointed!

Monday we headed out to the Atlantic for a short trip to south Miami (30 miles). The winds started light but quickly picked up to 15 knots ahead of the beam. It was a bumpy but fast ride to "No Name" harbor in Biscayne Bay.

Now you're asking - "How it is possible that a harbor can have no name?" One of the original land developers on Key Biscayne tells the story this way. "Before the land became a park, it was privately held property. There were plans that were drawn up to make the acreage that today is Bill Baggs Cape Florida State Park,  a development that included condominiums, residential and estate homes and everything else that makes up a first class development."
"With nothing to start with, as the survey and planning stage was underway, the body of water that is today "No Name Harbor" had no name, so that is what was written on the architectural renderings.  Where the plans had the harbor drawn, in the middle of the harbor is written "No Name Harbor".   The development, of course never came to be, the land was donated to the State of Florida park system, and the name "No Name Harbor" stuck.  The harbor with no name  today is officially named and recognized as  "No Name Harbor".

We'll head over to Miami Stadium Anchorage for the weekend before contemplating our trip across the Gulf Stream early next week...