To the Berry Islands After a few days at Bimini Sands marina, we were ready to continue our passage into the Bahamas. We made sure to leave the marina at high tide so as not to repeat the hilarious sand bar incident from a few days before.

We headed a few miles south to Cat Cay and anchored off Gun Cay resort for the evening. Around 9pm the winds kicked up exposing us to a pretty good swell. Our anchor started dragging and try as we might we could not get it to reset in the soft sand and grass. The wind was not predicted and did not bode well for a midnight bank crossing. We would try the bank in the morning if the wind was lighter and more southerly.

Rather than fight with the anchor all night we decided to head for the almost empty marina called Gun Cay Yacht Club. A private marina which charges an arm and a leg to park your boat, we hoped to rest on the wall next to the private air strip for the night and get out of there for a few bucks the next morning. We tied up to the wall with care and had a pretty good night's sleep while the SE winds continued to blow.

By morning things had settled and the wind had shifted to the South, giving us a good angle to sail across the bank. We had a great sail for most of the day and were amazed to watch the depth meter show a consistent 12 - 18 feet for most of the passage.

At 5:30 we steered to a spot .5 mile off the well traveled GPS route and dropped our anchor just before sunset. The winds were very light out of the South and we were parked in the middle of nowhere! Aside from the stars above us, the only landmarks we had were a few other boats anchored off in the distance. We spent a peaceful night on the bank and took some time to explore a beautiful night sky without city lights. The Milky Way was well defined and with a small sliver of a moon, there were more stars than we could count. 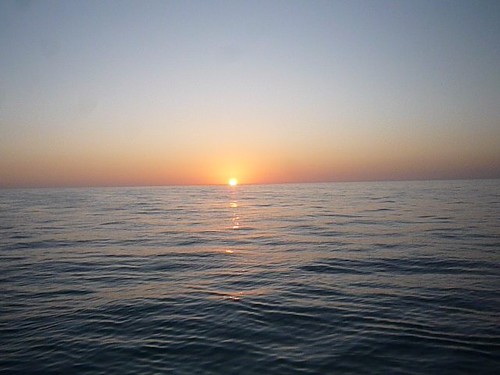 Winds were light the next morning so we motored the remaining 30 miles off the bank and into the Berry Islands. We headed for the East side of Chub Cay and grabbed a mooring at the Berry Island YC. The mooring was brand new and chained to a HUGE concrete block so we felt pretty secure. We visited the house at the end of the dock to pay for our mooring. While talking to the guy at the bar we noticed the big screen TV and asked if we could come up and watch the Superbowl later. He said there would be someone there and to come up around 7pm.

We got to the bar at 7 and the game had already started. There were a few locals there and some people from other boats and we all picked sides and started cheering for our teams. Some of the local guys really got into the game and as the shouting got louder someone turned up the volume on the TV. This, of course, led to even louder shouting and by the time the Packers had successfully beaten the Steelers, our ears were ringing. We were happy to have had a chance to watch the game (and the commercials) but were VERY ready to return to the quiet of the boat.

While at this anchorage we snorkeled at a coral head near the shore in about 7 feet of water that had lots of tropical fish. We saw glasseye snapper, yellowtail snapper, grunts, nassau grouper, squirrelfish, queen triggerfish, bar jacks, and some tiny fairy basslets. The second day I was approaching the reef from the dingy and as I swam over one large formation I saw what was at least a 5 foot Nurse shark hanging out under the ledge. I'm not sure who was more startled but we both took off fast in different directions. I've seen lots of Nurse sharks, but rarely this close and being the first shark of the season I was spooked! I hung around the reef for a bit longer but also paid attention to the surrounding area in case any more large predators were around.

We went for a walk on the island to see what type of activity was there and quickly found out that the economy there had suffered badly from the recession. There are around 60 permanent residents now and the large new development called "Frazers Hog Key Resort" has not progressed since 2006. The skeleton crew of 4-5 guys take care of the administrative buildings but nothing like what is suggested by the web site the developer maintains.

The skeleton operation does have wifi and when we spotted the antenna on the top of the building we hoisted our new super-wifi receiver to see if we could get a signal. It is 1.5 miles from us on the boat but we're doing quite well with a weak signal.

We also explored the 'booty beach' at the south end of the island. This is the beach that gets most of the washed up debris and you never know what you might find. The shelling was really good and there were lots of fishing nets and shoes - there are always shoes. We spotted a little one-eyed teddy bear along the way and decided to adopt him and give him a new life on RobinLeigh. He'll likely be in many future photos (see photo link at bottom of this post). 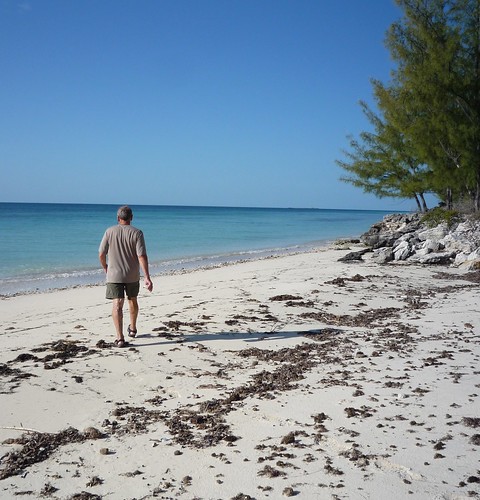 Last night we invited Debbie and John from Shamrock over for a drink. Another boat with a single-hander on board had come in a few hours earlier. When we saw him headed back to his boat with his dingy we called him over as well. Mark showed up a few minutes later with his guitar and played for us for a while before going ashore for dinner.

Tomorrow (Thursday) we will head around to the east side of the Berry islands to a place called Little Harbor Cay. There is a place there called Flo's that is supposed to be a cafe / general store and we remembered someone telling us if we visit the Berry Islands we must stop at "Flo's".

Follow this to photos and video: To the Berry Islands