Junkanoo and Geocaching at Rock Sound Rock Sound was a great place to hang out for a few days. A large shallow bay with few waves and miles of white sand for anchoring, you can almost forget you're on a boat. Quiet nights and long sunny days made us a bit lazy.

One day we visited the restaurant where we had lunched while traveling by car. The food was just as good the second time and the staff was very friendly. They invited to an event the next day that they put on for cruise ship passengers that come down by car on a tour of the island. The cruise ships visit the south-western tip of the island so we've never actually seen one, only their native inhabitants - tourists... 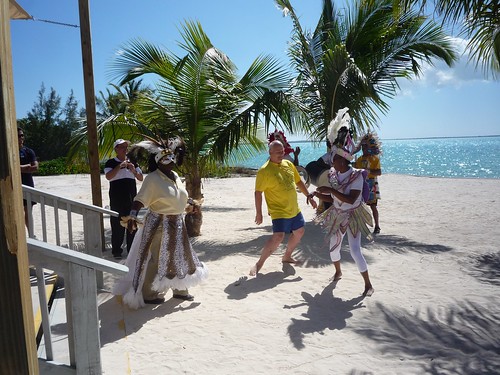 We watched a demonstration of how to make conch salad and listened to island music for a few hours. At the end of the event some dancers came out and did a dance that is popular during Junkanoo (the Bahamian version of Mardi Gras that happens in the Fall). The dancers were entertaining and so were the tourists :-)

While at this location we found out about a Geocache in the cave next to one of the "blue holes". The blue holes are formed by seawater that enters through the crevasses in the limestone that makes up most of the island. There are also lots of caves and one local told us you can get from the east (bayside) to the west (ocean side) through the underground tunnels. That must be at least 2 miles underground so we decided to pass on that one!

We stored the directions for the geocache on the ipad in the morning and made our way to the cave system. The directions were very well written and the cave was pretty impressive. We even surprised a few dozen of Bahamian bats at one point, causing them to fly around over our heads.

When we got to the place where the cache was supposed to be hidden we could not find it. It was an older cache that had not been maintained so we were not surprised. It was still a great adventure. Since the cache was no longer there we decided to make a new one near that location for future trekkers. The Cache is called "Tucker One", in honor of our cat, and it is a small whiskey bottle with a note inside. Charles will create a geocache entry for it soon on the web so people can find it. 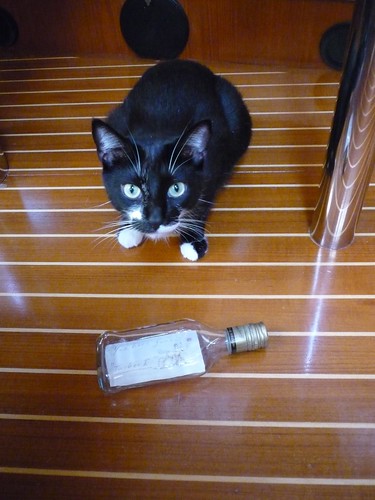 We had a nice sail from Eleuthera to the Exumas on Saturday, fishing the whole way. One line was on a spool and we were not watching it closely. By the time we saw it had something on it we only had a fish head left. Some Barracuda ate well that morning.