Today Charles has one more reason to celebrate his birthday - He fixed the engine! After bleeding the fuel line dozens of times and looking EVERYWHERE for leaks and other issues, he finally found the trouble.

The fuel cut-off valve (used to stop the diesel engine by cutting off the fuel supply) is pulled closed by the solenoid when you stop the engine. 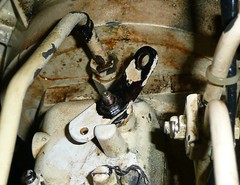 Before you say - "Wow Charles, why didn't you see such an obvious problem?", you must know ALL the facts. First, the valve was mostly hidden under the solenoid assembly AND second, when Charles looked at it, it looked exactly like it does in the photo above (open).

So, thanks to a lot of persistence (and maybe a little birthday luck), Charles the "grease monkey" has come through again!