27 February 2020
Annette
For the last five days we've been waiting......our visit to Puerto Natales was a great little side trip, lots of sunshine, beautiful scenery and nice weather, but time to get a move on and now we are stuck. The wind is relentless from the west 25-35 knots, gusts to 50 day and night.
But it doesn't suck. We were able to move from the deep, unprotected, crowded anchorage full of steel ships just off the town to a well protected, quiet little anchorage 7 miles up around the corner. I actually really love this anchorage. It is small but large enough that we don't have to tie to trees. With the boat always pointing into that nasty wind the aft deck is a pleasant place to hang out. We are in a little bubble of warm sunshine and sprinkles, with Rainbows reflecting off the hills and misty water. It's a cozy feeling as we look out onto the channel with it frothy white peaks and spindrifts.
The problem is once again, water. We watch rain dumping by the buckets across the channel but not a drop in our bucket. We've a quandary; the conditions are perfect for making beer and doing laundry but water is now at a premium. So we make beer. Priorities.
Comments 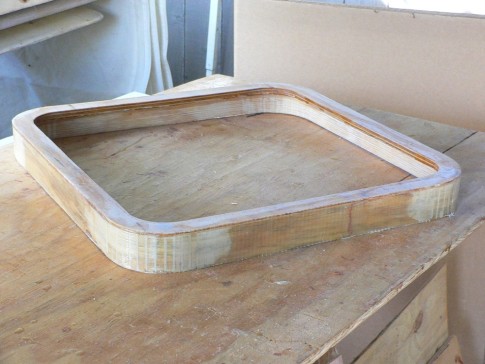 Hatch base. The original hatches were stuck to the deck using silicone. These bases raise the hatches off the deck and give them a flat base and good seal.
Added 9 January 2011