19 January 2020
ANNETTE Reed
The town of Ushuaia prides itself on being “El Fin del Mundo” or “The End of the World”, and, like the rest of the country, is adamant that the Maldives (Falkland Islands) belong to Argentina, with posters and monuments everywhere so you don't forget!
We've been here for over a week now preparing the boat for the long return back up the Channels to Valdivia. Mostly that consists of filling every inch of the pantry and freezer with food to last 3 months, including 150 greased eggs, boat repairs and maintenance, deep laundry, and of course brewing another batch of IPA. We did got out of town once for a beautiful hike and hope to have another day in nature tomorrow when we plan on renting a car and doing a little sight seeing, weather permitting....
The pier where we are docked is located right in the middle of town which is conveniently located for everything we need, but timing is everything. First because of siesta which closes all retail shops from 12-5pm and second there is the crazy weather. You can wake up in the morning and it's raining and blowing 30+ knots outside(not very conducive to getting things done around town on foot) and you can be fairly certain that by siesta it will clear. On the bright side the 360* view from the boat is both unique and dramatic with snow capped pinnacles right behind the city, and outlining the shores of the Beagle Canal from East to West.
As I write this I see 40* knots on the anemometer, rain is pelting down and a lone tourist is bracing himself on the dock so as not to get blown off his feet. Looking across the channel the sun is illuminating a spot of fresh snow on the hills while bulky white and black clouds race over the tops, covering it all up in an instant.
In essence our journey north has begun like a heard of startled turtles. We begin by waiting for weather to sail back over to Puerto Williams, Chile in order to check in, and from then on it's “hurry up and wait!” ticking off the miles as we slowly sail back north to where we began in October. 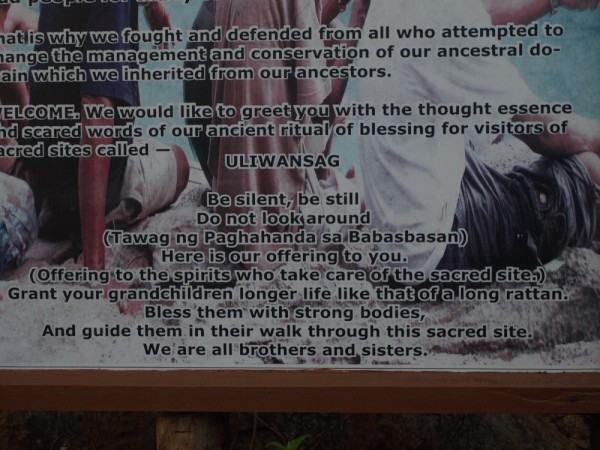 Not sure what the penalty for "looking around" is, but we kept our eyes on the ground just to be safe.
Added 1 April 2013