We can criticize America, complain (rightfully) about crooked self serving politicians and argue about how our tax dollars are spent. Without a doubt America is not perfect but we have some of the most beautiful scenery imaginable. Fortunately, we had a few presidents and naturalists in our early history that saw how splendid our lands were and created national parks to preserve for generations to come. Just think, in 1872 when Yellowstone was made the first national park, Wyoming was not yet a state. How fortunate we are to have federal lands to tour, hike and camp on for just a few dollars, making it affordable for all Americans. Steve and I have wanted to spend time visiting these national parks, forests, recreation areas, etc. and are having the time of our lives doing so. 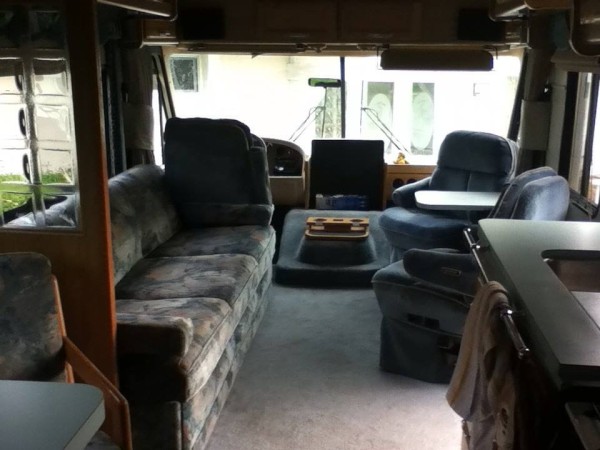 Seeing all the grandchildren was the main agenda and reason we purchased a motor home so we could travel the USA. Having seen Riley and Avery in Florida and then spending time with Collin in Wisconsin we are now ready to head toward Seattle and the newest grandchild, Silas. John and Joanne (s/v Out Of Africa) flew into Milwaukee on June 25th and made themselves at home in SLOTH. John is expecting his first grandchild in mid August which gave them even more reason to tour North America. The four of us will travel together until the beginning of October when they head to Montreal to spend time with Johns daughter and his new grandson. 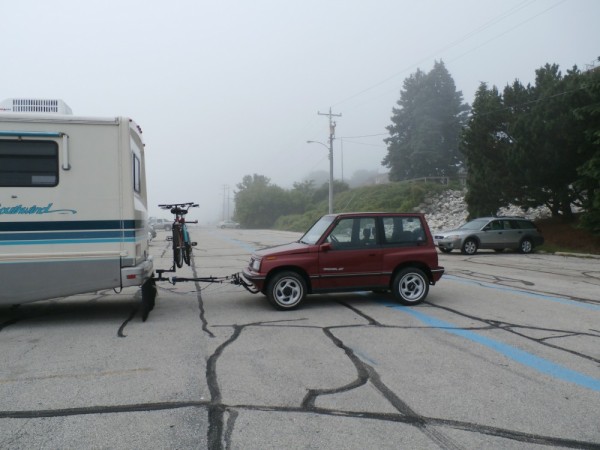 A small GEO Tracker (Toad) and towing hitch was purchased and hooked up behind SLOTH. There were many trips to Wal-mart, camping stores and RV centers. Storage lockers were filled with tent, camp chairs and sleeping bags and other supplies to allow Jo and John to set off on their own if they wanted to explore the unspoiled backcountry within the parks. 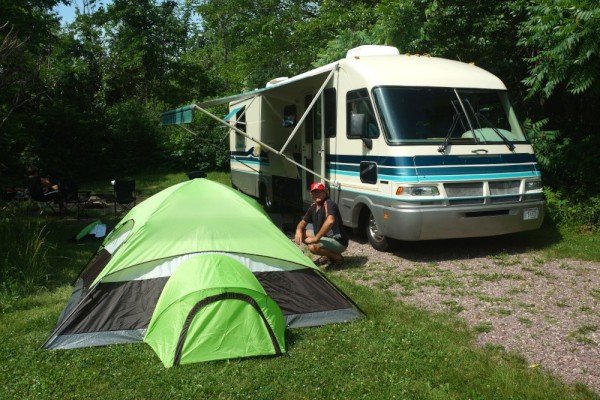 So with every imaginable space crammed to the brim we started the engine and headed west. We made it as far as Devil's Lake State Park and enjoyed the magnificent views from 500-foot Quartzite bluffs overlooking a picture perfect lake, all formed by the continental glacier. Two nights allowed us a full day to explore the cliffs, lake and Parfreys Glen. The glen is a deep gorge cut through the sandstone of Baraboo Hills. It was the first State Natural Area to be designated in Wisconsin. 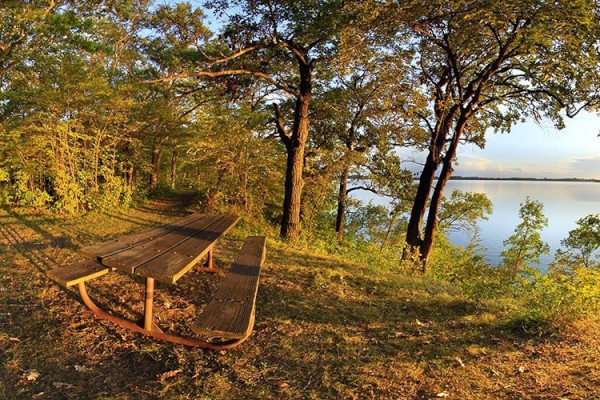 Minnesota only received the briefest glimpse with a few scenic overlooks and one night at Big Myre State Park. Eastern South Dakota yielded our first night in a Cabela's parking lot and of course a trip to the Corn Palace. The Cabela's parking lot included picnic tables, a small pond and even a RV dump station. Late the next day we pulled into the Badlands National Park never expecting to find a camping spot. Amazingly there were a few spots left and we parked the motorhome and raced off in Toad to explore the sandstone spires and buttes that were eroded away to leave towering formations amid flat rolling prairies. Big horn sheep, mountain goats, pronghorn antelope, deer, and buffalo went about their day ignoring the tourists. We were in awe of the beauty of the first National Park on our tour and took plenty of pictures so be sure to check the photo gallery. 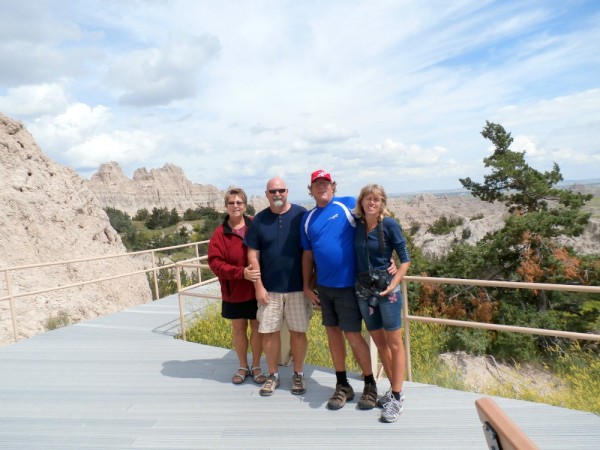 As we were leaving the park Jo and I were in the Toad and the guys took SLOTH because we wanted to head down a dirt road and get some photos of the prairie dogs and ground owls. Telling them to wait in a parking area near the entrance we photographed our subjects and headed for the rendezvous point. Hmm, no motorhome. So we went down to the end of the park, no motorhome. We asked a nice family if we could use their phone and called Steve only to find out the guys were sitting in a parking lot in Wall Drug. Really? From now on if we split up we will have the guys repeat our rendezvous point back to us to be sure we are on the same page.