The Black Hills National Forest may be most well known for Mount Rushmore but it is so much more than that. Scenic byways take you through narrow rock tunnels, along limestone cliffs with rushing waterfalls and among towering granite pinnacles. The area also includes Custer State Park, Wind Cave, Devil's Tower. There were a few other gems in the area that we did not have time to include in this tour. We saw herds of buffalo, mule deer, scattered pronghorn, a mommy mountain goats with her baby grazing along the roadway. Wild mustang and donkeys could be seen in the meadows and multitudes of birds dotted the skies. 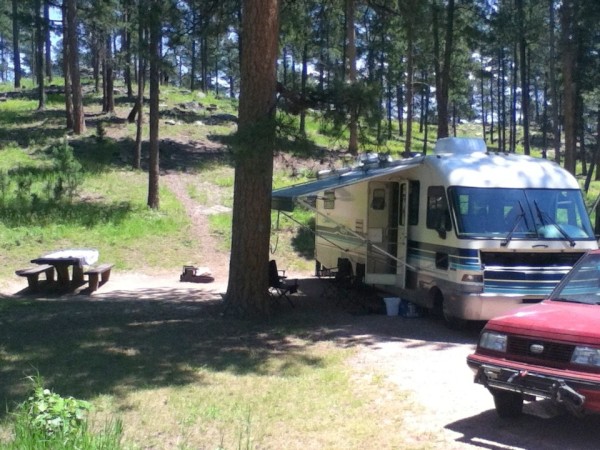 We spent a night in Rapid City's Cabelas parking in lot so we could arrive early to try to find a camping site in the forest. It was July 3rd and the first camp ground we tried had a lovely spot just for us. This camp ground was our first choice because of its location and we were quite surprised to find such a spot. Mount Rushmore loomed over us as we drove from Keystone to Horsethief camp ground. We all could feel the excitement building so as soon as we settled into the site we jumped in TOAD and took the Needles Scenic Highway loop. The winding roads and low narrow tunnels come with warnings that not all vacationers heed. A motorhome had traffic stopped dead at the second tunnel we exited Talking to a park guide later we found out that just a week before a motorhome had entered a tunnel at enough speed to actually get stuck and that ripped mirrors and awnings are common occurrences. Being lucky enough to be going the opposite direction of the road block we continued on our scenic tour. Each overlook was more exhilarating than the last and I was grateful for digital photography, taking picture after picture. The loop takes in Custer State Park and more that once we had to stop for buffalo. When driving the loop clockwise, the last two tunnels give you a dramatic view of Mount Rushmore just as you exit and it was a perfect end to a perfect day. 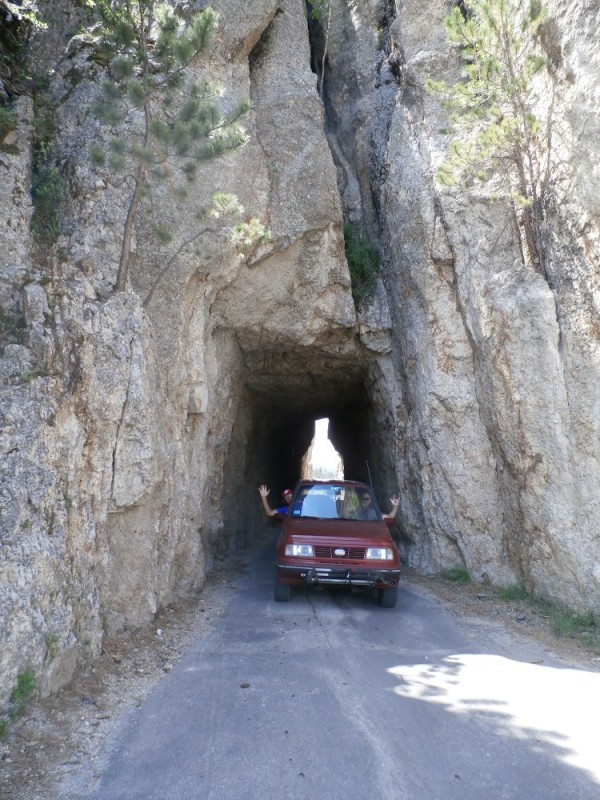 Independence Day we headed south to Wind Cave, one of the largest caves in the world twisting more than 600 feet below the surface. There are no stalactites or stalagmite, here the geological spectacle is known as boxwork. This is a honeycomb pattern that covers the cave along its deep drafty corridors. The cave maintains a temperature of 54 degrees year around. When the tour is over an elevator takes visitors back to the surface and the warm summer air. On the route back through Custer City we enjoyed a walking tour of the town and fireworks at sunset. The Crazy Horse monument was illuminated against the night sky and visible as we drove by. 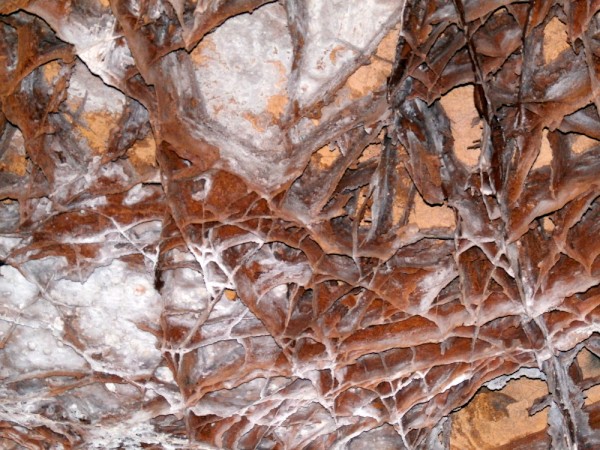 Mount Rushmore National Monument, impressive from the road, is magnificent up close. Finished in 1941, these massive heads are about 60 feet tall. 90 percent of the 450,000 tons of granite were remove using dynamite. Drillers then used a honeycombing process drilling to exact depths. Next the rock between the holes was chiseled away and lastly the surfaces was smoothed out with a special pneumatic tool to leave the surface as smooth as a concrete sidewalk. 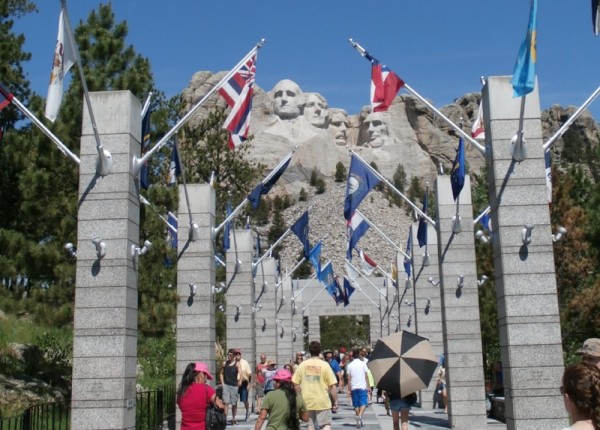 Before heading to Devil's Tower we had to drive through Sturgis and Deadwood. Sturgis isn't much of anything unless it's Bike Week but the guys bought T-shirts and even little Baby Silas will have one to wear when we get to Seattle. Deadwood was more interesting, a cute western town that was popular with tourists. We had lunch in an old saloon and watched the reenactment of the famous shooting of Wild Bill Hickock. He was shot in the back of the head as he played cards and died holding a pair of Aces and Eights, forever known as a deadmans hand. 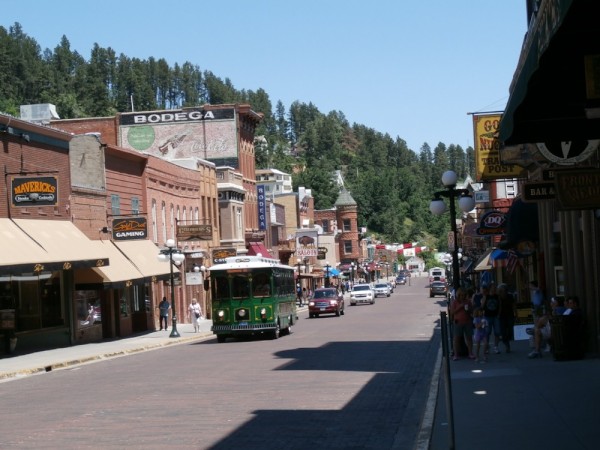 Part of the Black Hills spreads into Wyoming and creeps up to Devil's Tower. 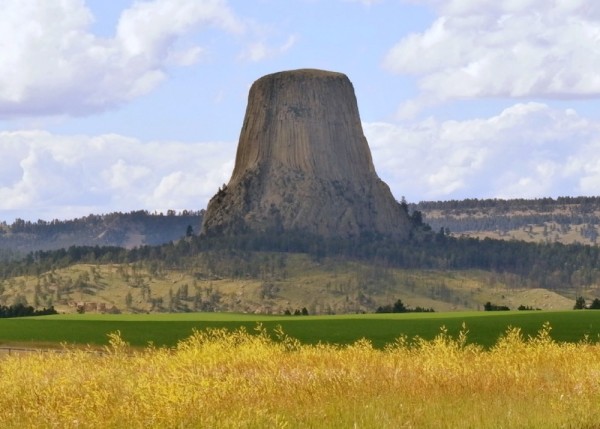 America's first National Monument is a massive stone pillar that rises 1,267 feet skyward. Several groups of climbers were scattered on the sides at varying intervals and really put the size of the rock into perspective. Sebastian jumped out of Steve's pack and went on a walkabout but we were able to catch up with him and had a stern talking to. We explained to him that Riley would be quite unhappy with him if he took off and travelled on his own. 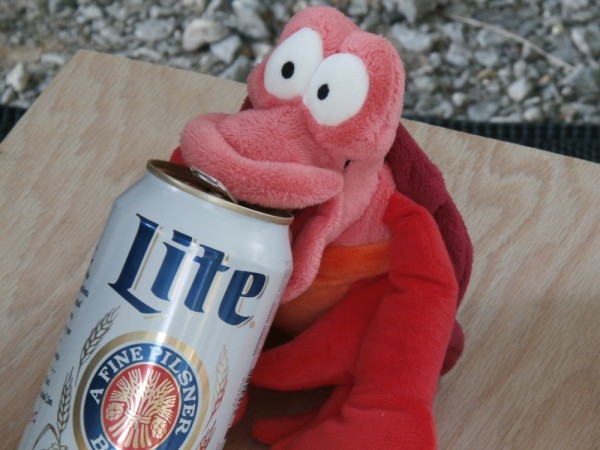 Our campsite at the base could not have been better. SLOTH was nestled amid a few trees, along a creek and with a stunning view.
Comments
Newer Older
Contents