Driving the coastline south from Acadia took us through several small towns and villages and a chance to visit new RV friends, Brenda and Andy, that we had met in Florida this past winter. Each towns was as inviting as the last and we hated the fact that we had reservations and needed to keep moving. Normally we travel without them but the east coast is densely populated and it was typical vacation season. 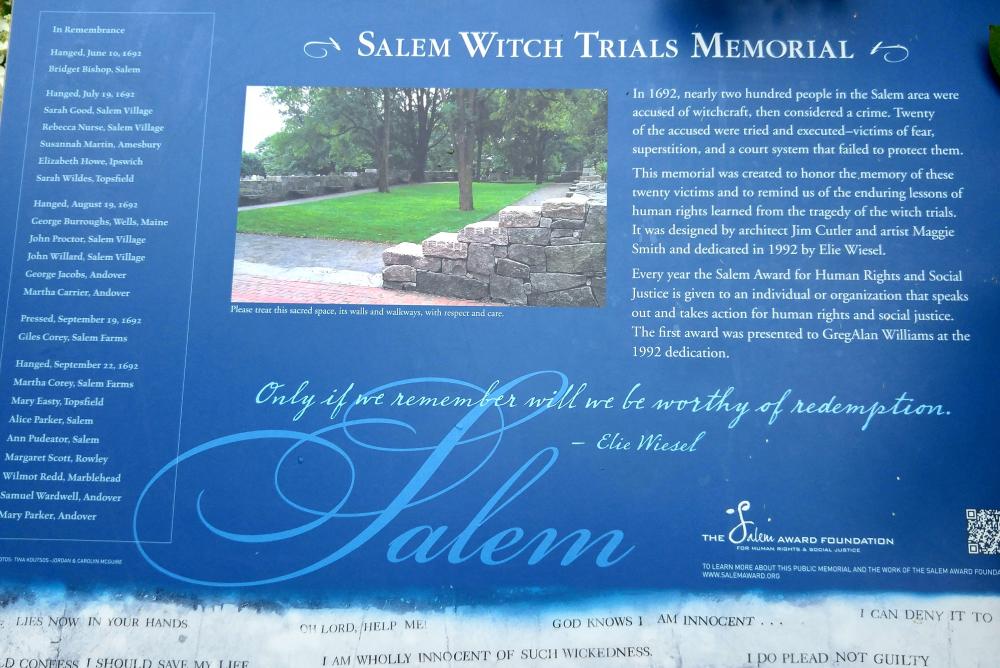 Salem is home to the U.S. National Guard and sports the House of Seven Gables but is best known for their Salem Witch Trials. Over 200 people were accused in a series of trials in 1692 and the first part of the following year. A total of 20 people were executed, several also died in jail. What I didn't know was that Europe had executed thousands of people accused of witchcracft from the 1300s through the 1600s. Back in Salem the trials were found unlawful in 1702 and restitution was made to the families in 1711. 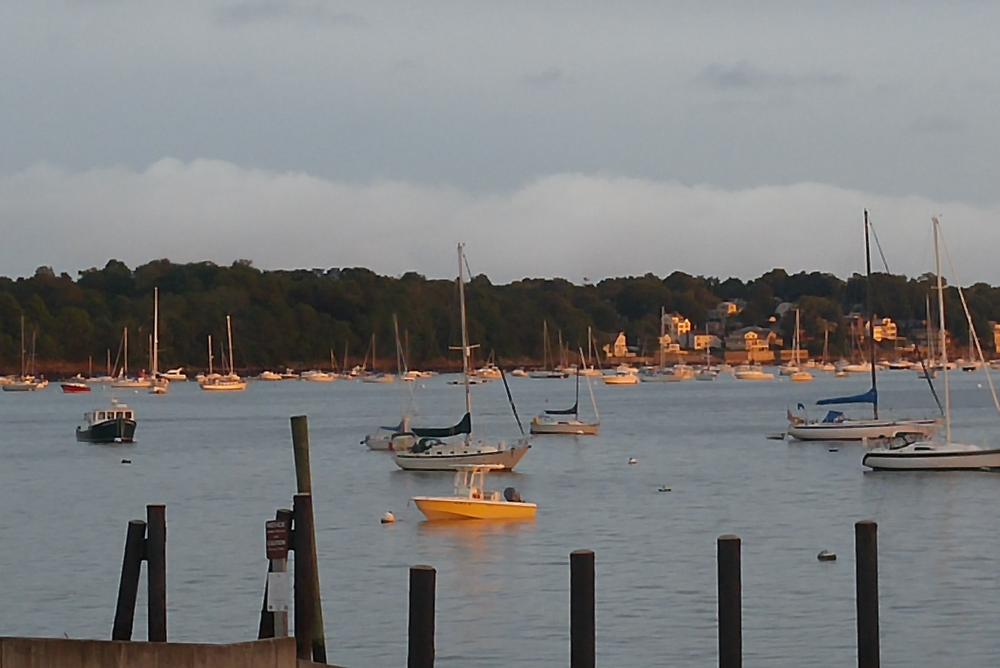 We had a lovely RV site right along the harbor and close to the Historic district. It is a small town that gets overrun by one million tourists annually.

From here we did a day trip to Gloucester to visit the Fisherman's Memorial. Over 10,000 have lost thier life to the sea but none more famous than the captain and crew of the "Andrea Gail". Our friend Brenda described the weather that day in Gloucester, putting reality into the unreal circumstances for "The Perfect Storm". 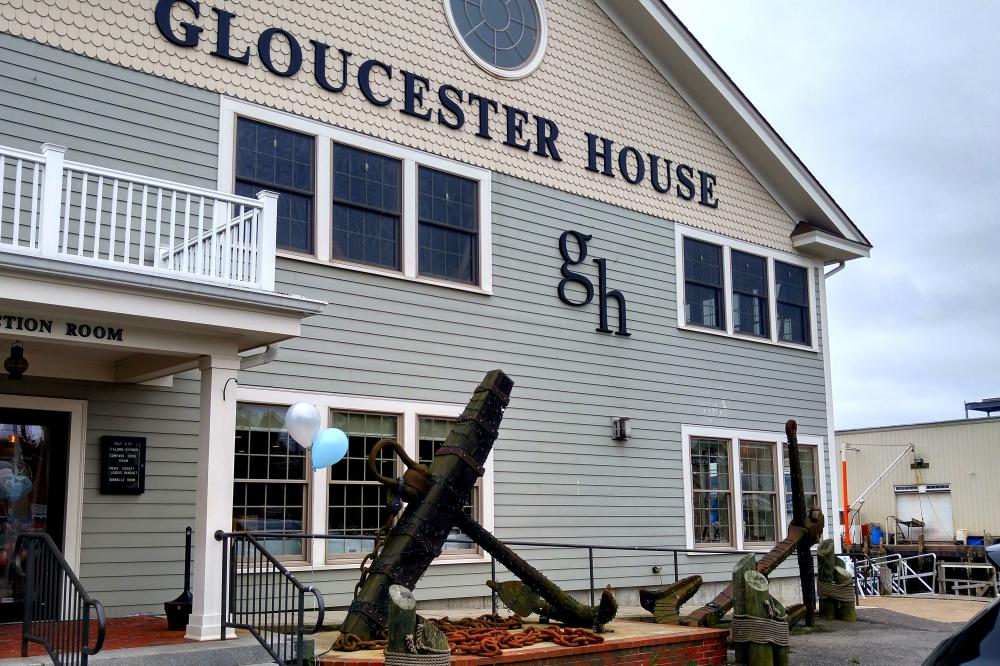 Walking the Freedom Trail in Boston was another fabulous day. The red brick path took us to the Old North Church where Paul Reverse is immortalized on his horse. This is the most visited historic site in Boston. 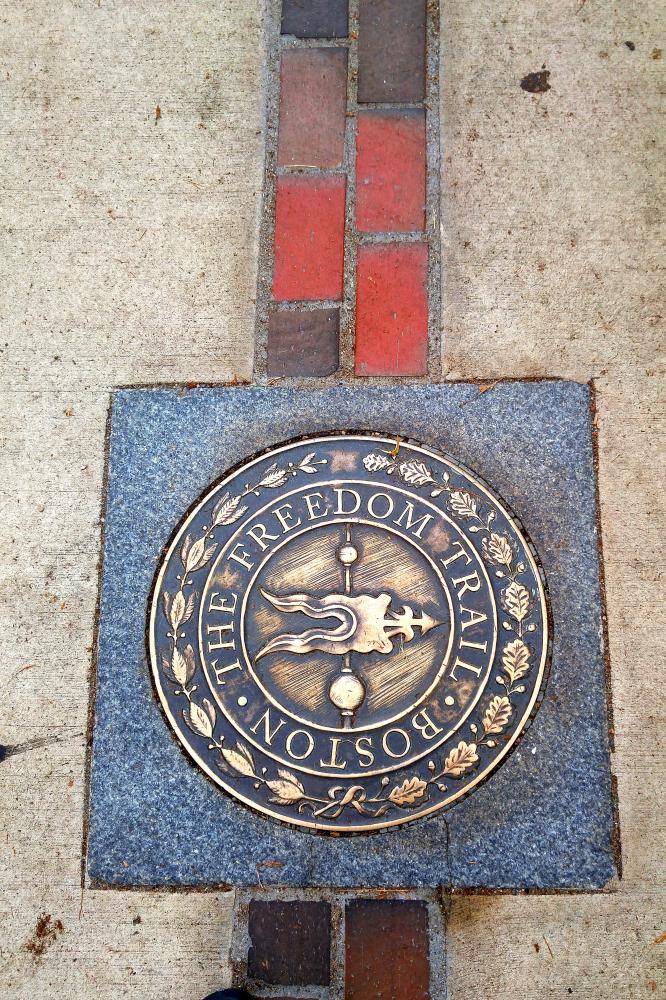 Continuing on the trail we passed through the North End and continued on to Faneuil Hall, Old State House, Old Meeting Hall and the site of the Boston Massacre. This is the site where 5 civilians were shot by British soldiers sparking the American Revolution. My favorite places were the old burying grounds. Seeing tombstones of famous figures we learned about in grade school was an amazing experience. John Hancock, Samuel Adams, Paul Revere are just a few names saw here. 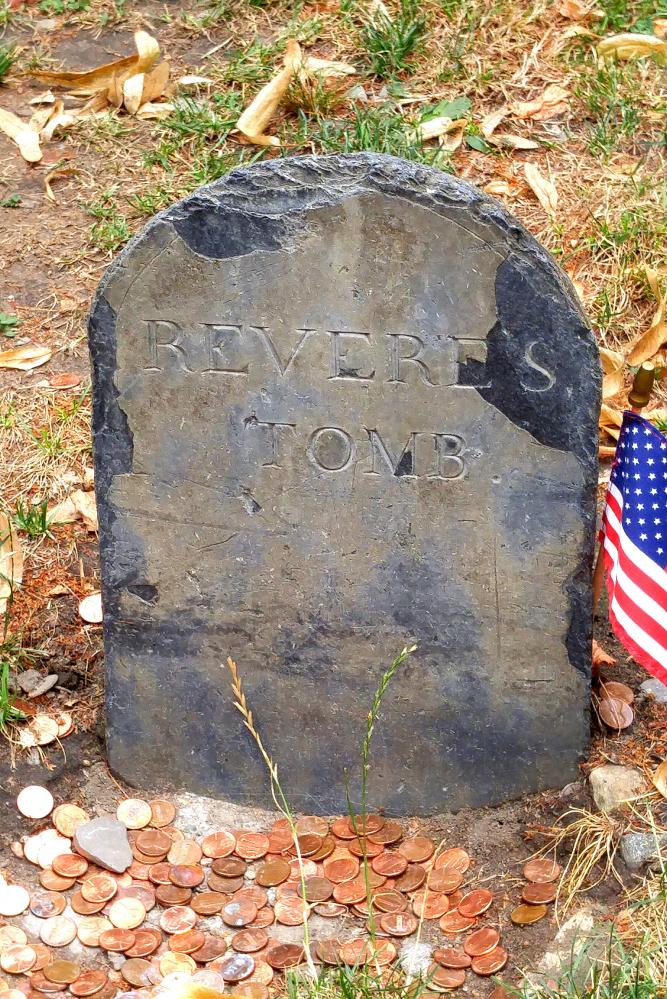 Our next stop was Plymouth to see the Mayflower (replica) and The Rock. More than a million visitors a year stop by to look at the rock just like we did, I wonder if it is the same million from Salem? 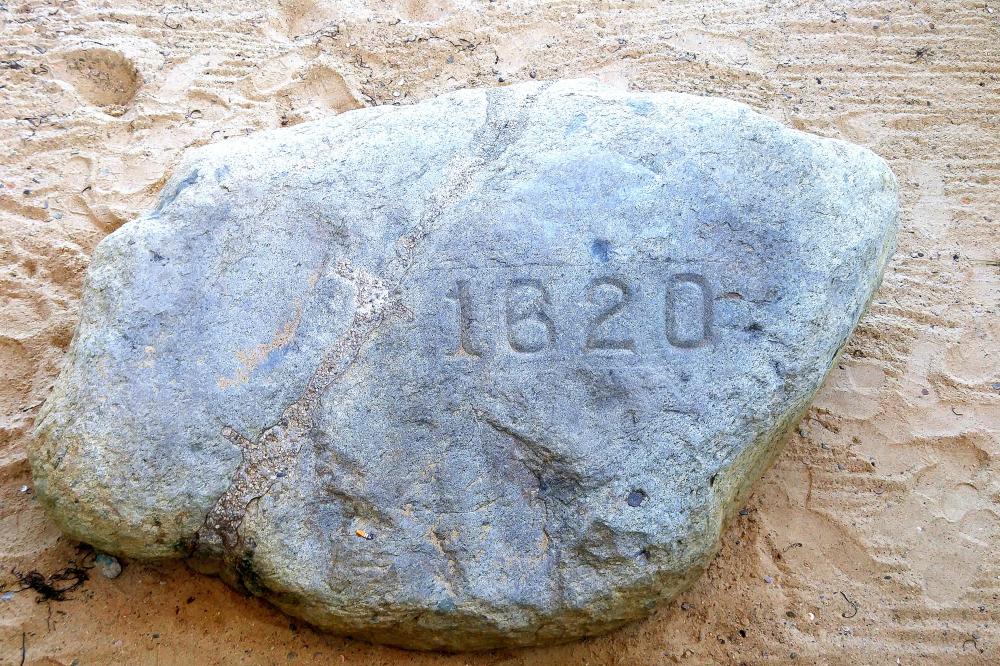 Here we had lunch with cruising friends Lee and Sharon s/v Allegro. It was great to catch up on more cruising news and again we wish we could have stayed longer. 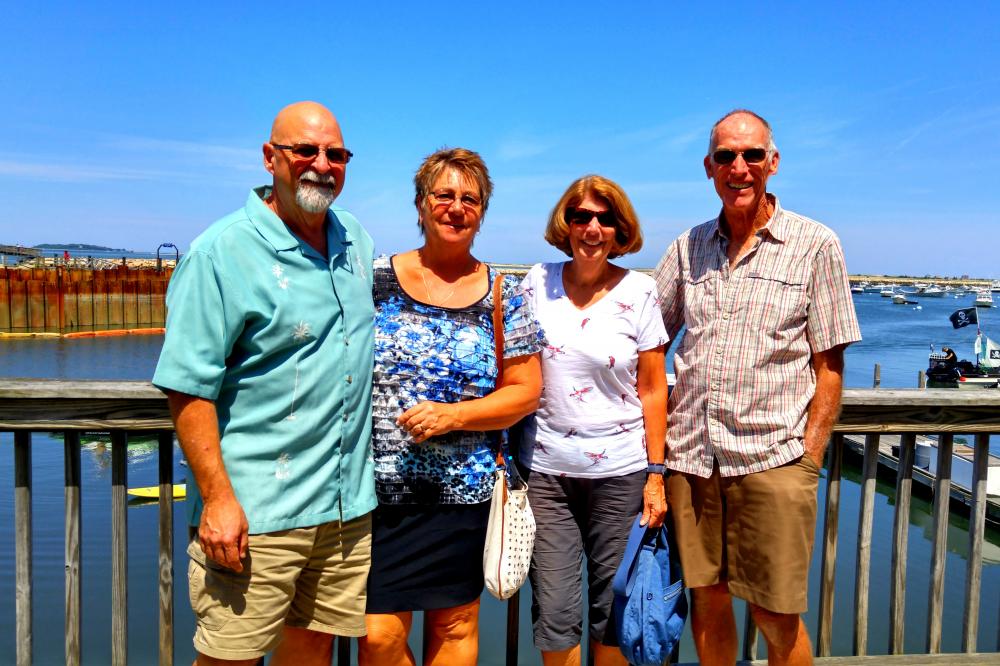 We were passing through Road Island and settled into a wildlife area near the entrance to long island sound. A few days later a short visit to Mystic allowed us to add Connecticut to our map and move on.
We had planned to spend the next few nights in New York City but common sense prevailed and we changed to a full hookup RV resort in New Jersey. At this point heat was becoming a major issue and we needed shade and both air conditioners running. Cruising friends Benia and Ed m/v Genteel (formerly s/v Sea Angel) were docked at Point Pleasant so we had a couple great visits with them and a trip to Atlantic City for docktails with a group of their friends. We also made plans to have the boat ready to attend Fantasy Fest with them in Key West this fall. 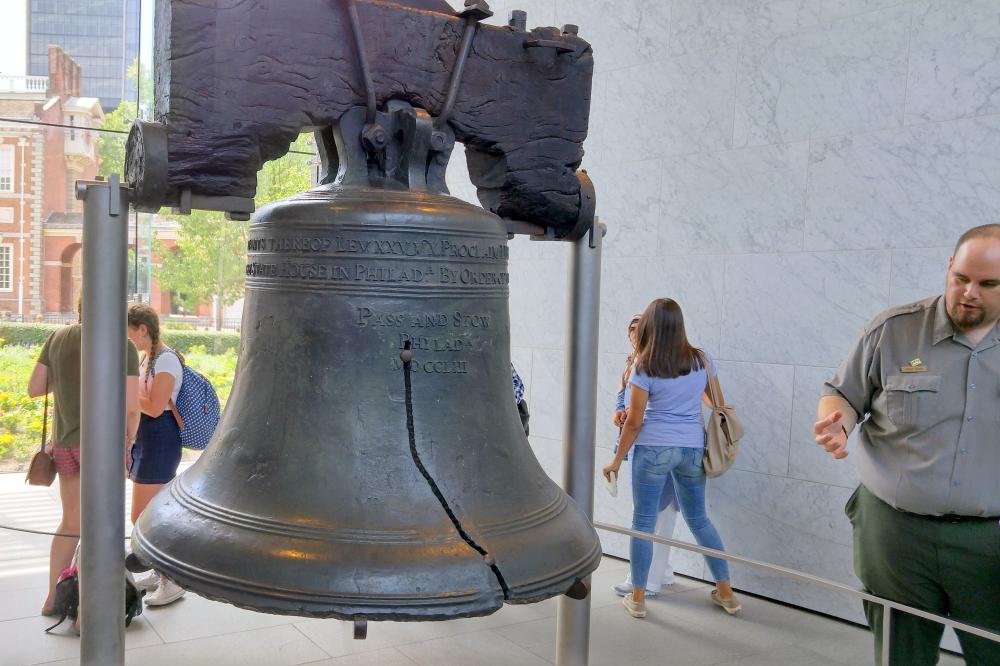 Our last stop on this entry was Philadelphia. The liberty bell and Independence Hall was calling for us. We visited the Old City Hall and even mailed postcards to the grandchildren from Benjamin Franklin's very first post office. We really enjoy walking around historic cities and feel fortunate to be taking in so many sight on this year's SLOTHly travels. Last but not least, lunch. I bet you know what we had for lunch! 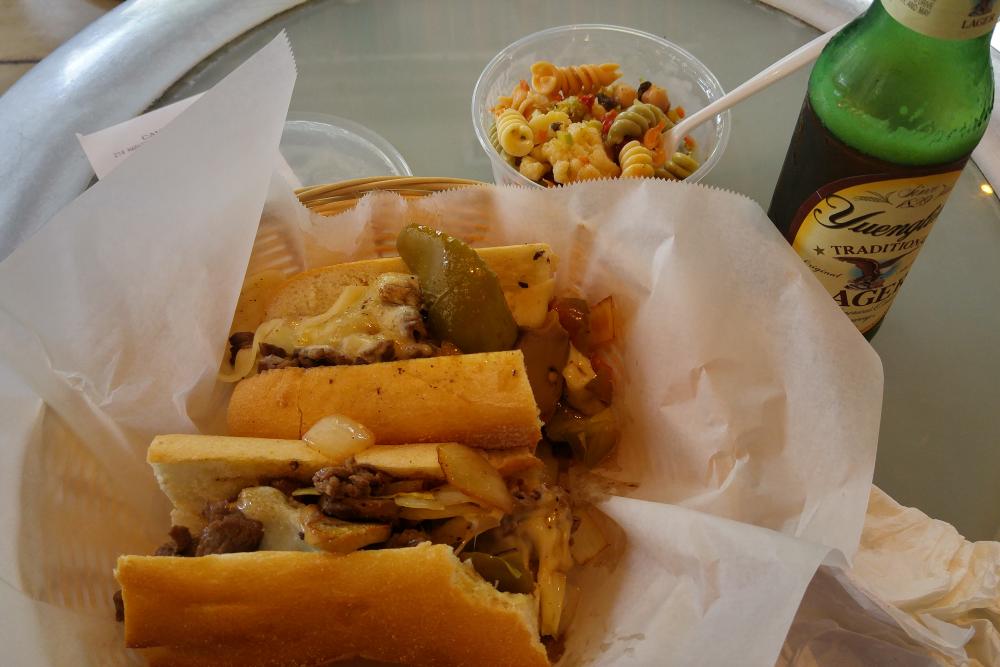