We finally visited Petrified Forest National Park, an area with trees that had been alive some 210 million years ago that went through a stunning transformation that lasted millions of years. The results are multi colored petrified wood that is composed primarily of the mineral quartz. The petrified would gets its colors from trace amounts of other elements like iron. The quartz is hard and brittle and fractures into clean cut segements. At 160-200 pounds per cubic feet, these large sections just sit around in the sun and shine like gemstones.

Petrified wood is found in every state and several other countries but the area around the park has the largest concentration in the world. We also visited 2000 year old petroglyphs and ancestral Puebloan dwellings in the park. It's hard to believe this area was once a lush rainforest but plant and animal fossils tell a story of early dinosaurs and other freakish looking critters.

Towns in the area have used petrified wood in many ways including store fronts, garden walls and decorative arches. When we were visiting an area near Dallas we also saw many homes built with it as well. I'm just thinking lifting those chunks would give one a real workout.

Now that we have completed our goal of visiting every National Park in the contiguous 48 it's time to find another bucket list challenge...

Photos in the gallery
https://www.sailblogs.com/member/sailacious/gallery/43325/
Comments

The final leg of the final road trip in SLOTH Our final road trip in SLOTH continued into California. The Sierra Nevada Mountain Range runs 400 miles and is part of the American Cordillera, a chain of mountain ranges that consists of an almost continuous sequence that rises through North America, Central America, South America and Antarctica. Mount Whitney towers at over 14,000 feet and is the highest point in the lower 48. Three national parks also make their home in the High Sierra. We had visited Yosemite a couple years back so our focus was on Sequoia and Kings Canyon. While these parks have different names and seperate visitors centers they intertwine with each other and also the protected lands around them. 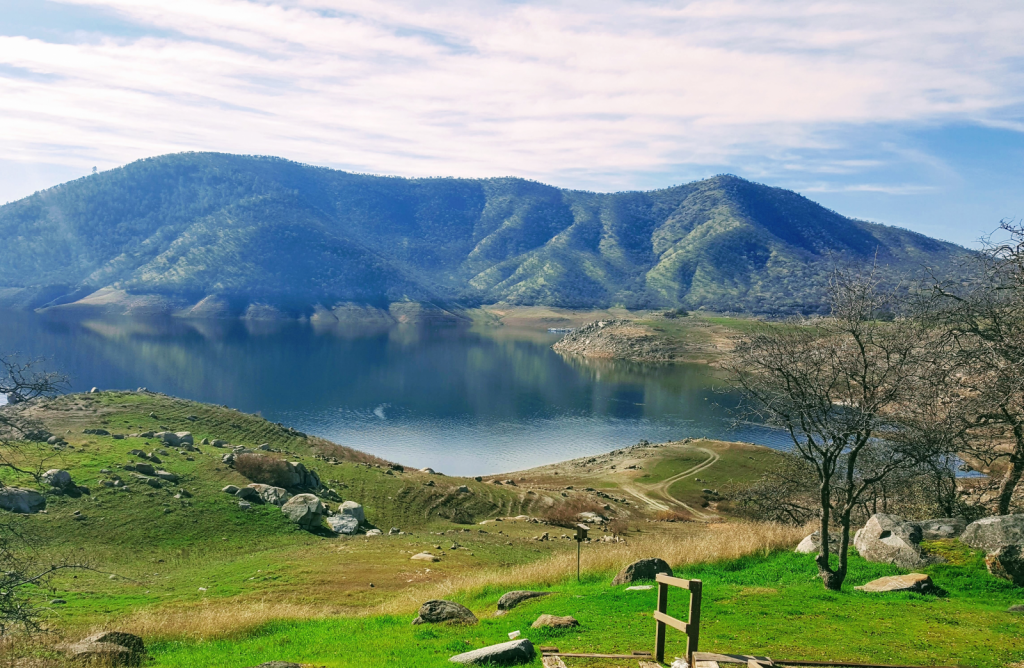 One might wonder why we would visit a park in winter that requires snow chains to traverse the winding road just to see some trees. Roads that are only partially open at that. Timing, its all in the timing. Now that we are traveling by boat on The Great American Loop summers, this was our time to go. That being said I know that the giant forest is breathtaking at any time but the snow did add an element of purity to the scene, snow that was untouched, giving the illusion that no one had been there before. The white backdrop accentuated the standing giants and truly created a Wonderland effect. 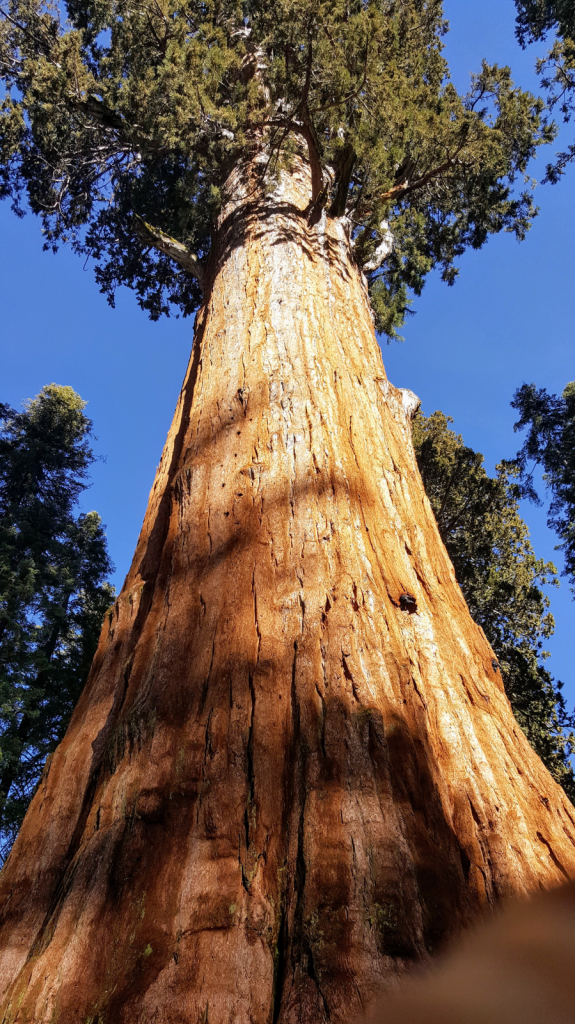 In addition to remarkable forests, Sequoia and Kings Canyon each has their own famous tree. The General Sherman is the world's largest tree by volume. It is estimated to be over 2000 years old and is 275 feet tall. Each year this tree continues to gain mass but does not grow taller as the top is dead.
The General Grant tree is 40 feet in diameter making it the widest known sequoia. You would need twenty people holding hands to circle around the base. 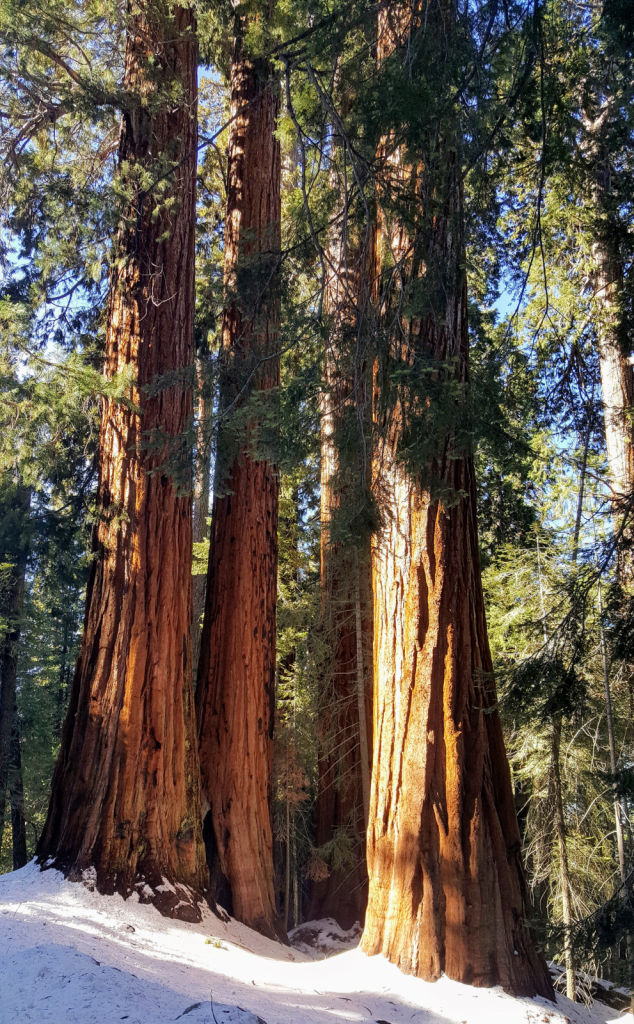 As an added bonus to visiting these two parks, we stayed in a few Corp of Engineer campgrounds nearby. COE have always been our favorite federal campgrounds as they are always near water, are almost always paved with partial hook ups, and usually have lovely views. Two of these made our top 5 all time favorite campsites list! 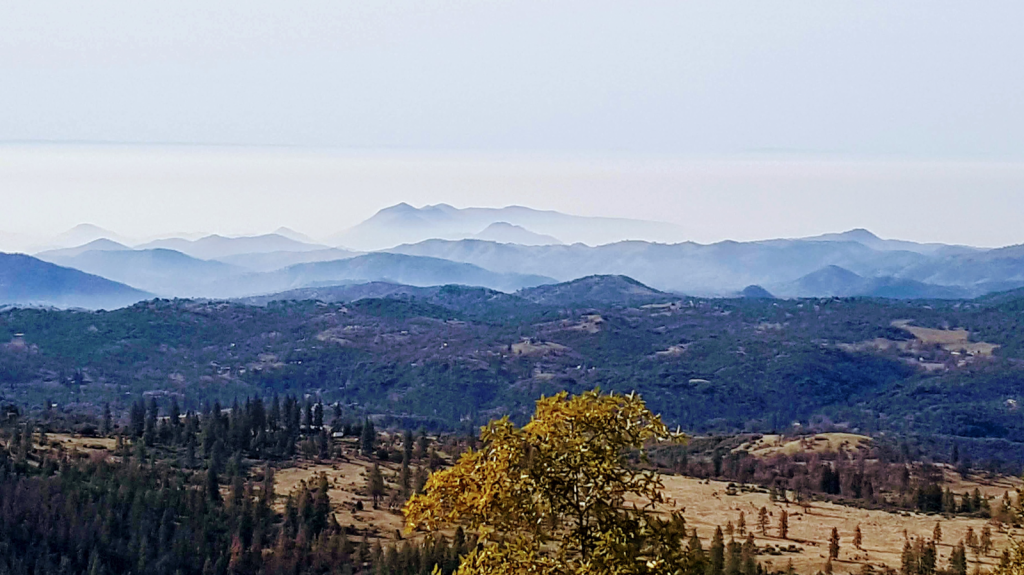 With reluctance we left our perfect views and headed west. The drive to Pinnacles NP was through miles and miles of vinyards, fruit trees and a variety of nut trees. We reached our destination to find the park campground all but deserted. The government shutdown was still on and only those with confirmed reservations were allowed in the park. Pinnacles was upgraded from a national monument to park in 2013 and we don't understand why. We have experienced much greater vistas driving sections of a variety of interstates. I assume some government official pushed for this to benefit someone but I'm not sure how it works. Maybe that's something I should research. Anyway, there was one lovely walk that we found among the few we tried and cut our stay short to move south towards Channel Islands NP. 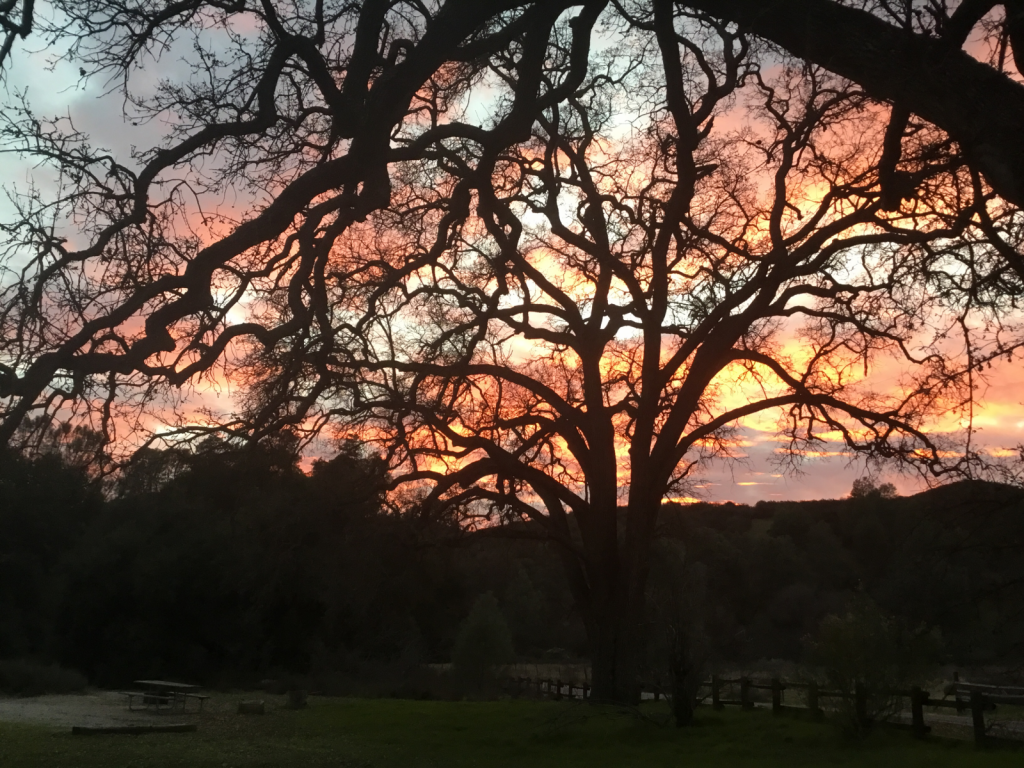 Honey look, a wine region! Put your blinker on. As an unexpected treat we spent a couple days at Wine Country RV Resort in Paso Robles. We sampled our way through this newer but extensive region. One winery told us that the area has more acreage of grapes than Napa and Sonoma combined....... 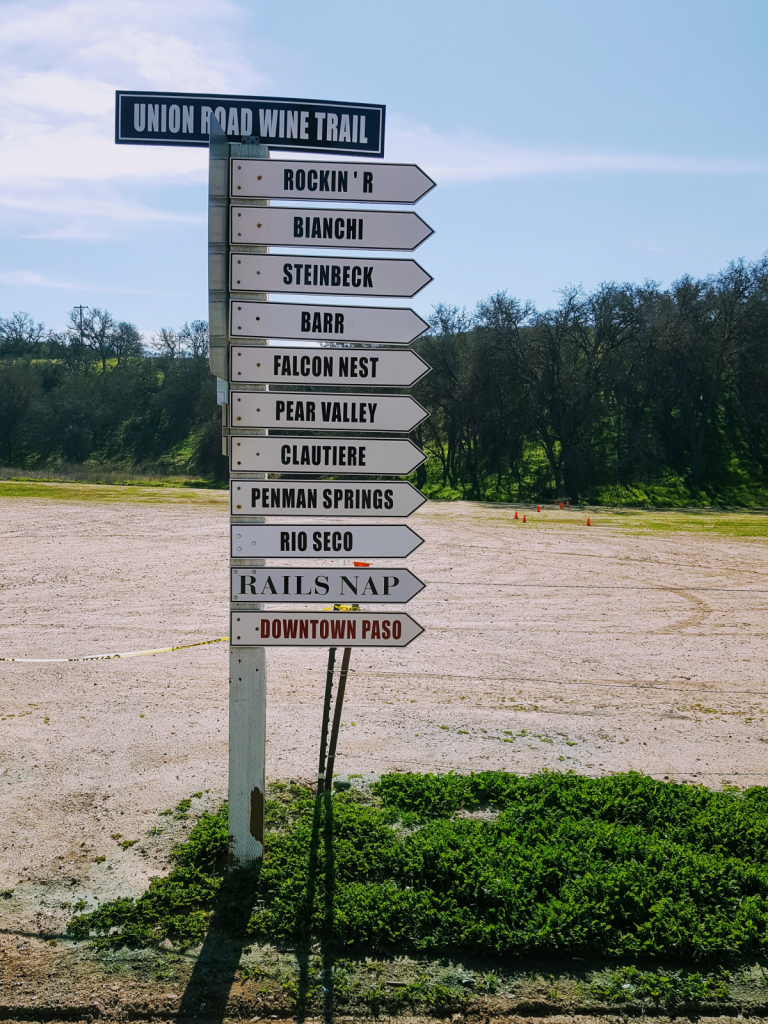 The drive along 101 was as wonderful as expected, ocean views, rugged coastline and even magnificent homes as we ventured closer to Santa Barbara. The Channel Islands sat offshore as sentinels protecting it's mainland. Channel Islands National Park encompasses 5 islands just miles off the coast yet worlds apart.

145 species of plants and animals found nowhere else on earth call these islands home. Rain and lighting prevented our scheduled boat from departing the dock but the visitor center had a very informative movie about the flora and fauna. A variety of marine life include the usual whales and dolphins but also seals and sea lions, the most unusual being the Northern Elephant Seal. These huge creatures were almost extinct in the late 1800s but now number upwards of 170,000 on the protected islands. Did you know that sea lions can 'walk' on land while seals scoot on their belly? Land animal and birds would also draw any nature lover to hike and explore these rugged time trapped sanctuaries. 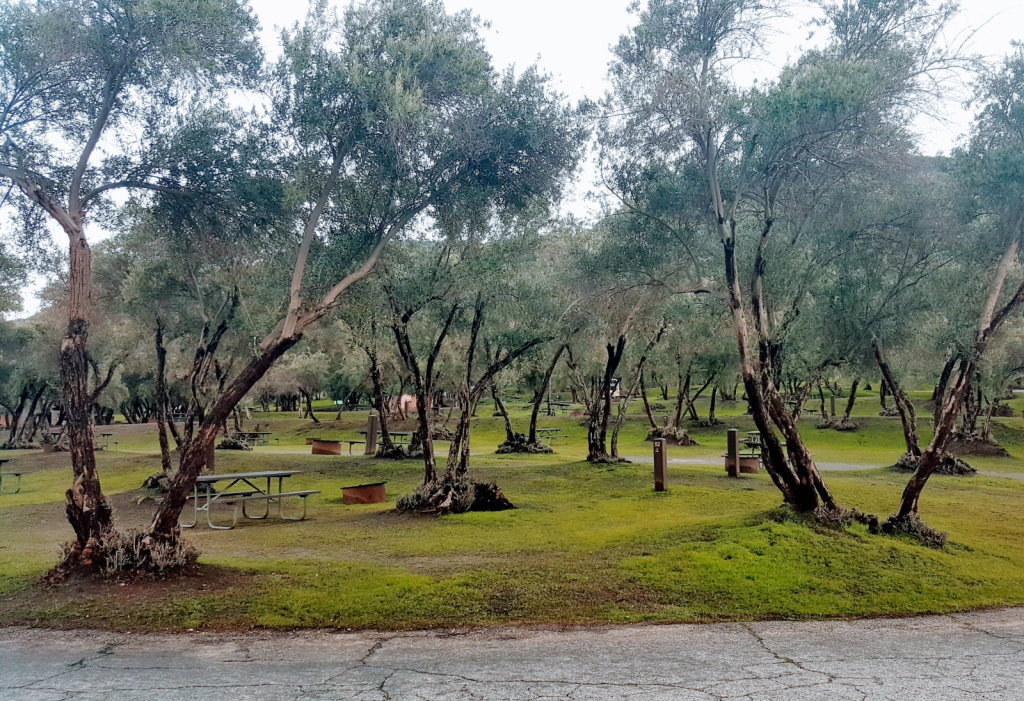 Heavy rains even drove us out of our campground, once or motorhome was pulled out of the mud, so we moved on along towards Joshua Tree. Like the Saguaro that only grows in the Sonoran Desert, Joshua Trees only grow in the Mojave Desert. Cholla, yucca and joshua trees grow in harmony here. Amazing rock formations that began eons ago as a result of volcanic activity (in reality they are alien cairns) punctuate the landscape. Another National Park checked off our list and the last park for the year. 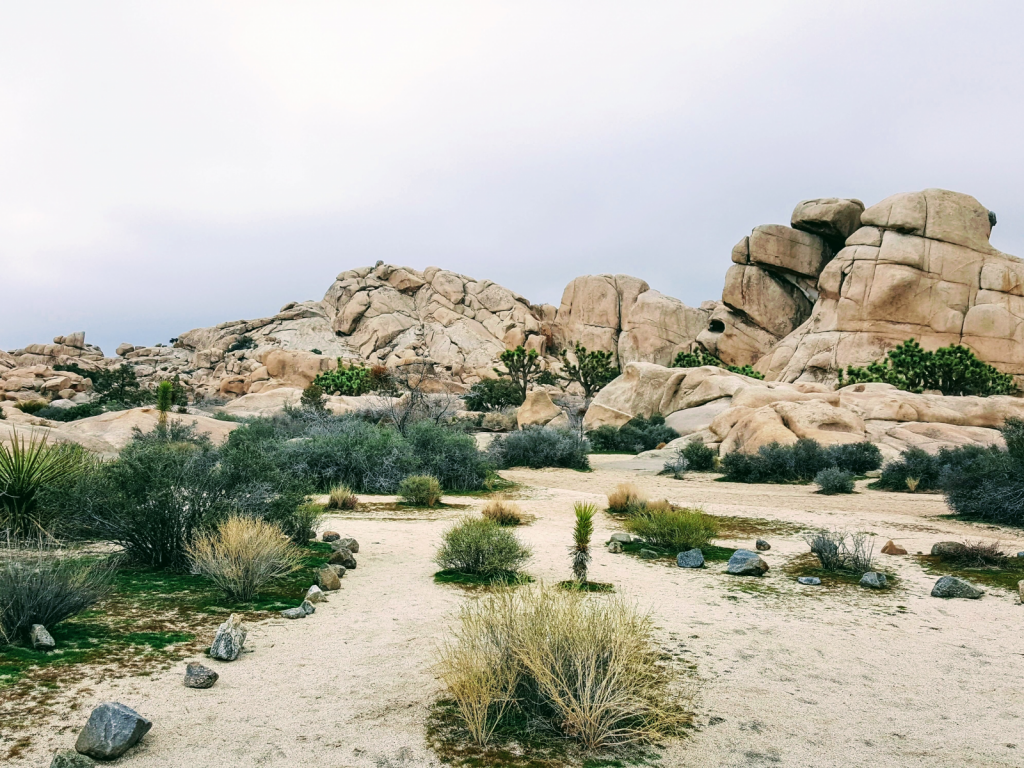 We spent a delightful few days visiting Steve's brother in Palm Desert on our way to our final destination for the season. Several lovely meals and a round of golf and off we were to Yuma. 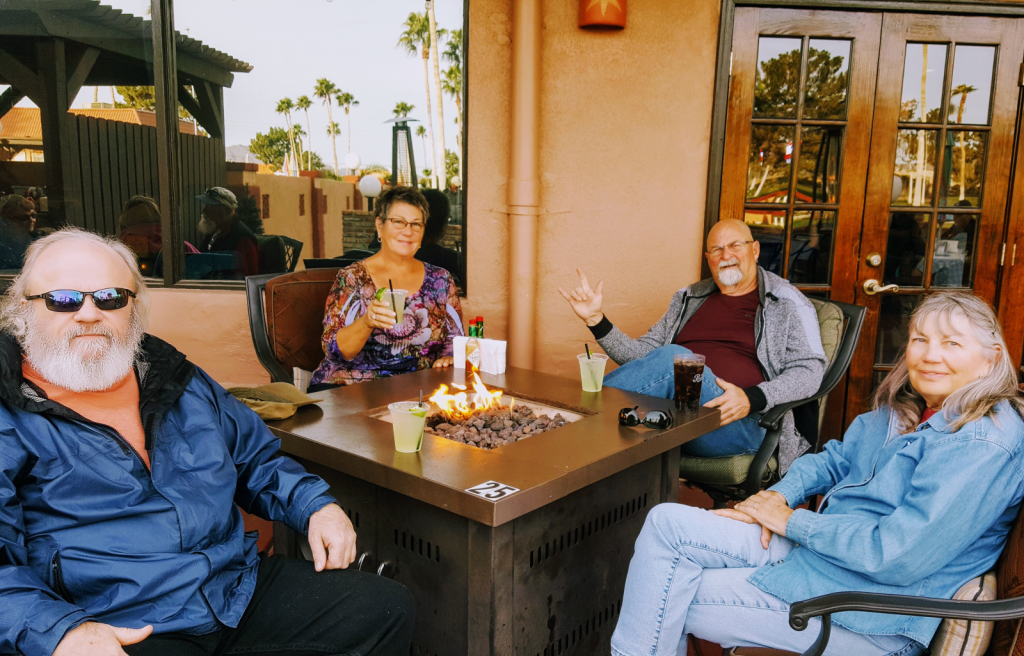 The original plan was to spend a month in Yuma checking out RV parks. Now that we already purchased a unit in Texas we reduced that to a week. The park we had reserved was nice and we did find another that was quite active but the fine dirt that got into everything was a major drawback. Poor DeeO'gee kept picking up and burrs in his paws and couldn't find grass to do his business on. Friends from our boating life had joined us there and made the stay enjoyable anyway.

Our last park we had planned to visit was Petrified Forest which was gated due to the government shutdown when we were in the area on our way west. We spent the night on our way back east at friend Kitty's park outside Phoenix only to wake up to blizzard conditions in the area north that included the Petrified Forest so we had to leave that last park for another visit to Arizona. 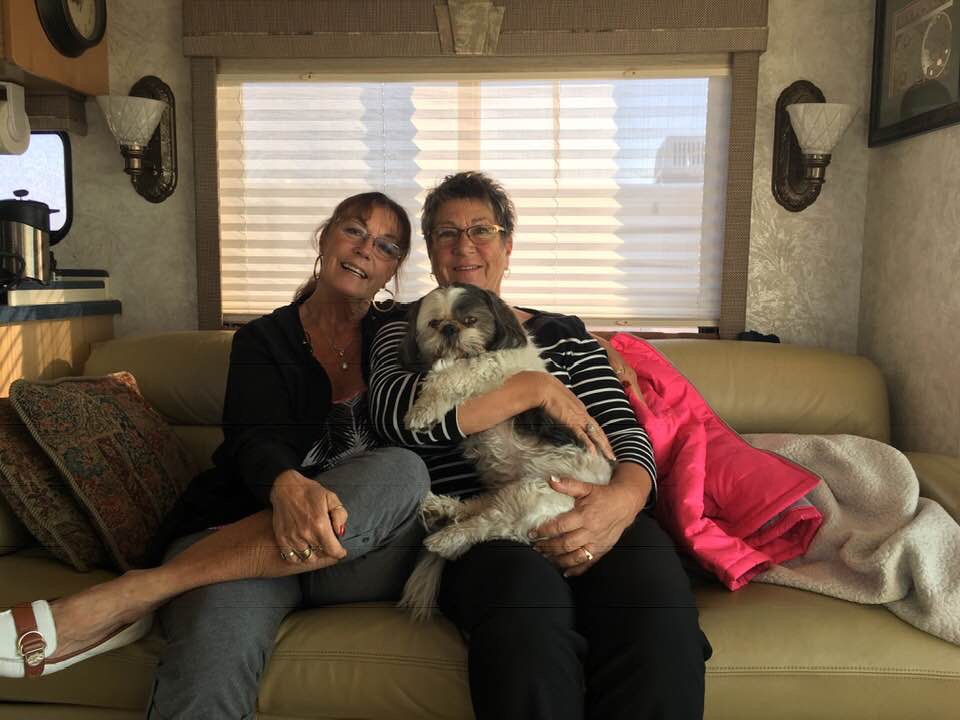 This was the last park on our original bucket list but since the list was made two more national parks have been added, neither of which I believe should be national parks. There are many different protected national designations and if you do a bit of research I think you would agree with me but again some congressman pushed for the change, stuck it in with the national budget and had their way. The National Park Mission Statement : 'The National Park Service preserves unimpaired the natural and cultural resources and values of the National Park System for the enjoyment, education, and inspiration of this and future generations. The Park Service cooperates with partners to extend the benefits of natural and cultural resource conservation and outdoor recreation throughout this country and the world.' Could someone tell me how this applies to the St Louis Gateway Arch?

So this ends our mission to visit parks, both national and rv, for this road trip

All in all, after viewing 55+ Parks throughout the southwest we are more convinced than ever that we made the right choice. Llano Grande RV Resort and Country Club will be our home for around 7 months out of the year, continuing our water based nomadic life until we finish the Loop, after that we will make a new plan. Another plan written in the sand at low tide.