Some Strange Things Happened on the Way to New Zealand When it came time to leave Tonga we found ourselves back in Neiafu. We were not quite ready to leave - we loved Tonga, and had not seen our fill - but the coming of the cyclone season and the insurance company said it was time to go! We had been working our way south to Nuku'alofa, where we had planned to "jump" to New Zealand, when we got chased back north by a nasty low pressure system that was moving to the SE just below Tonga. The harbor at Neiafu is well protected, and we waited out the passage of the low in comfort, and prepared ourselves and Bright Angel for the passage to New Zealand.

We cleared out of Tonga and left Neiafu for New Zealand on November 15. The tropical depression that had just passed played havoc with boats already on passage to New Zealand (including many of our friends), and resulted in one couple being rescued by a freighter after their boat was knocked down and the skipper injured. But the "weather window" in the wake of the low looked good, so off we went - with our next port of call being Opua, 1300 nm away on the North Island of New Zealand.

We worked our way south along the western edge of the Tongan Islands, saying we would come back some day and pick up where we left off! Just before we left Neiafu, a sailboat had apparently been found on a reef in the southern Vava'u Group, with her sails up and a dead crewman aboard. The Tongan Navy was investigating, and every 30 minutes they broadcast a warning on VHF radio to stay clear of the area. When we were south of Tonga we heard a US Coast Guard cutter (presumably from American Samoa, about 800 nm to the northwest) interrogating a British single hander (who had left Neiafu about the same time we had) over VHF radio. We saw the USCG cutter on AIS, and when they were through with the Brit we contacted them on the radio and gave them our particulars - we never heard from them again, and they soon steamed our of our "electronic sight" (we never physically saw the cutter). Sometime after we arrived in New Zealand, we learned that the boat found on the rocks in Vava'u had been bound from Ecuador to Australia, with two persons on board - and $10 million (US) worth of cocaine. The drugs were still on the boat when it was found, but the second crew member was (and apparently still is) at large.

When we cleared southern Tonga (and for several hundred miles thereafter) we saw something very strange in the water - streaks of pumice, mostly pea-sized pieces up to an inch or two in diameter, with occasional larger chunks up to basketball size. The pumice, a light weight, volcanic rock that floats, was apparently from recent underwater volcanic activity in the Kermadecs, NE of New Zealand. We had been forewarned of the pumice in the area, and like many others began checking our raw water strainers to ensure none of the extremely abrasive pumice made it into our seawater pumps where it could do some real damage.

About 250 nm southwest of Tonga, after we had covered about 500 of the 1300 nm to New Zealand, we decided to stop and take a break at North Minerva Reef - 23⁰ 27.43' S, 178⁰ 55.66'W. I had bought a "Minerva Reef Yacht Club" T-shirt in Neiafu, so I felt obliged to stop and earn the right to actually wear it! There are two Minerva reefs - North and South (about 50 miles apart) - the north one being easier to enter and with fewer obstructions (coral heads) to anchoring. North Minerva Reef is circular - about 3 nm across - with a 75 meter clear pass on the NW side. The depth in the middle is about 30 meters, and shoals to about 12 meters within a comfortable anchoring distance from the reef, which you can clearly see at low tide, but there are no islands or other dry land on the reef - just the surf crashing on the outer reef and the open ocean beyond. We anchored in the NE corner (see photo, above), where there was decent protection from the easterly winds. We were the only boat in the reef - and it was a surreal experience: anchored, alone, in the middle of the ocean!

There was plenty of pumice floating by inside the reef; Linda grabbed the dip net and started a collection! The next morning, the weather guru on Gulf Harbor Radio (on SSB out of NZ) warned us of a new tropical depression forming near Vanuatu that was expected to move SE below Fiji and toward Minerva. Staying put was not a viable option, so we took care of a few chores and were back under way by noon. With the new low threatening, the object was to get as far to the south and west as we could, as fast as we could; that would keep us out of harm's way, as long as the low followed the track it was supposed to (which they don't always do!). Anytime the boat speed dropped below 4 knots under sail, we fired up the engine; the winds were fairly light for several days as we were in a broad band of stationary high pressure, so we did a lot of motoring. This tactic worked well - we avoided the low, and eventually picked up some good sailing winds in the "squash zone" between the low and the high. The rest of the passage to New Zealand was fairly benign, except for the last 150 nm or so, when there were 20-25 knot winds well forward of the beam, and some choppy seas - a relatively small uncomfortable price to pay for what was otherwise our best passage to date!

When we were about 200 nm north of New Zealand, we had an unexpectedly close encounter with Kiwi authorities. Any boat travelling to New Zealand is required to give New Zealand Customs and Immigration at least 48 hours advanced notice of arrival, with boat and crew details, anticipated arrival date and time, and port of entry. We had done this via e-mail before leaving Tonga. Early one morning, just as the sun was coming up, there was a loud roar behind us and we looked up to see a Royal New Zealand Air Force Orion P-3 (with one of its four engines feathered) emerge from a cloud bank to our port quarter, flying at no more than 200 feet off the water as they swept past our bow; you could see the faces of the pilots as they went by! Just as they went past our VHF radio crackled to life, and they called us, by name, on ch 16. They asked for an update on our arrival information, and wished us a safe rest of our passage! What a royal welcome to New Zealand!

We made land fall at Cape Brett (35⁰ 03'S, 174⁰ 14'E) at dawn on Monday, November 26 - 12 days out of Neiafu. We sailed in through the stunningly beautiful Bay of Islands under cool but sunny skies to the quarantine dock at Opua, where our New Zealand adventures awaited! 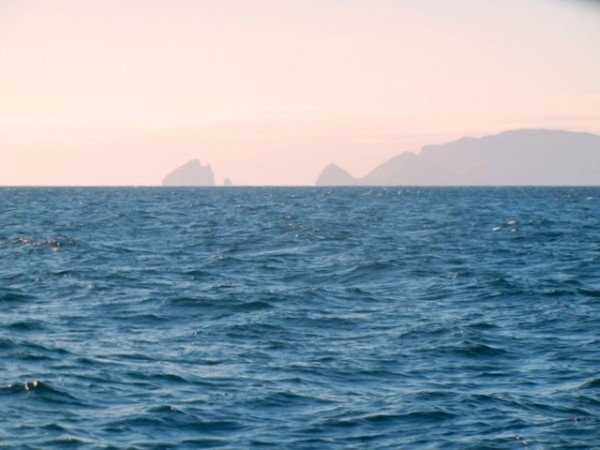 Land Ho! Cape Brett, at the entrance to New Zealand's Bay of Islands