Linda and I usually steer clear of tourist attractions (or “tourists traps” as we sometimes call them), but we succumbed to the “temptation” to take in a few while in New Zealand. One, called “Sheep World”, was just off the road about an hour north of Auckland. We had driven by several times, and only joked about stopping, but then our friends Bob and Ann (SV Charisma) told us it was a "must see" – so, we made plans to visit with our friends Mark and Anne (SV Blue Rodeo) when we were on our way back from a trip to Ponsonby, an upscale suburb of Auckland (more on that in an upcoming post). We also rode the Wynyard Loop trolley in Auckland, and we went to the top of Sky Tower, also in Auckland – NZ’s tallest structure. 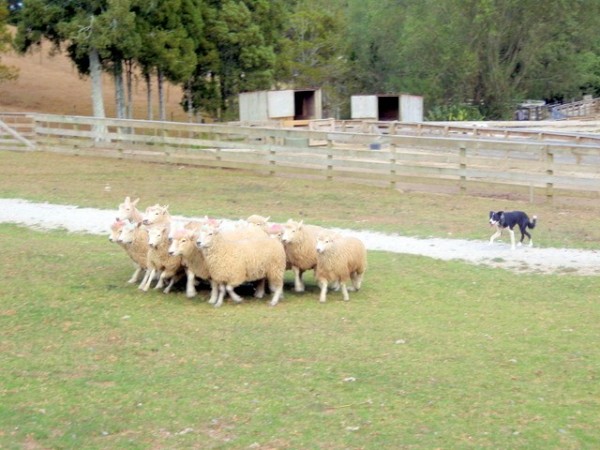 SHEEP WORLD The Sheep World visit started out less than promising – besides the four of us, there may have been two or three other people in the gift shop when we arrived. But, when we paid our admission and bought a few bags of kibble to feed the animals and stepped out into the barnyard, we were the only ones there! So we fed the animals, took some pictures of the critters, and wandered around a rather pointless “eco-trail” until it was time to head back to the barn for the “Sheep Show.” Yup – you guessed it – we were the only ones in attendance. (We were beginning to wonder if Bob & Ann were having a good laugh about recommending the place to us!)

But then the sheep dogs and their handler arrived for the “show” – and it was all uphill from there! What we learned from the presentation about how sheep dogs are trained and what they can do, how sheep are raised and the sheering process, as well as about the different grades of wool and their uses, was all absolutely fascinating. Then we stepped outside and watched as a small herd of sheep was rounded up and brought back from a nearby pasture by one of the dogs, with only the most subtle commands from the handler. It was amazing to see the dogs work and how the sheep responded - very obediently!

Back in the barn, we learned how sheep are sorted into different corrals - which Linda volunteered to do - and how they are shorn - which Linda took a turn at doing! Finally, we all got a chance to bottle feed some ravenous baby lambs – what a hoot!

After the show we had lunch at the café next to the gift shop. Yeah – you guessed it – I had a lamb burger, and it was really good! 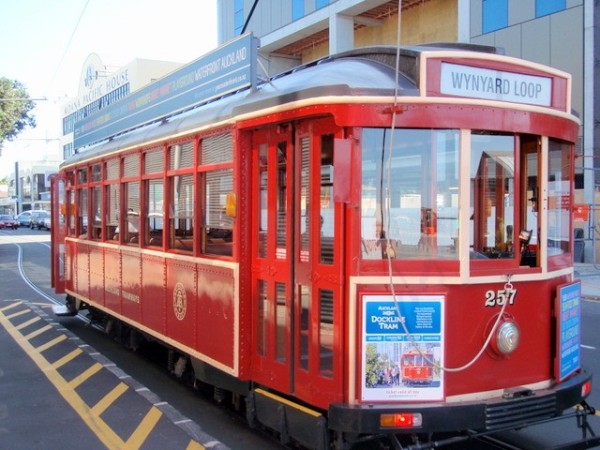 WYNYARD LOOP TROLLEY The Wynyard Loop trolley in Auckland goes nowhere, really – just around and around about a five block square area with not much in it. Locals certainly do not ride the trolley for transportation; so why did we ride it? Because, at one of the stops the trolley makes, we heard the driver giving an interesting account of some local history – and, we wanted to hear “the rest of the story.” It was time well spent, even if we just went around several blocks we had already walked by a number of times, and we ended up right back where we started. We learned a lot – even if some of what we learned was disappointing; like the fact there are no more of the original Auckland trolleys in service, and the one we were riding was actually from Melbourne, Australia! 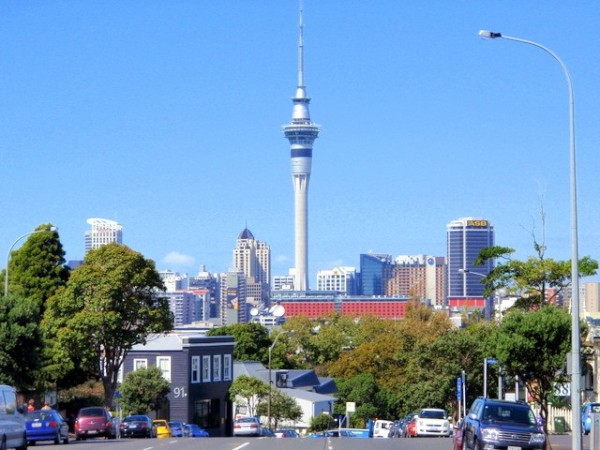 Sky Tower, Auckland, as seen from the Ponsonby district

AUCKLAND SKY TOWER The Sky Tower is the tallest structure in NZ, and dominates the Auckland skyline – you can see it from just about everywhere. For a Washingtonian that has never even been to the top of the Space Needle, it was a strange urge indeed that led me to want to go up the Sky Tower – but I am sure glad we did! What a fantastic view from the top! After soaking in the awesome 360 degree view from the observation deck, we went up a floor to the bar and had Happy Hour with a view – fantastic! 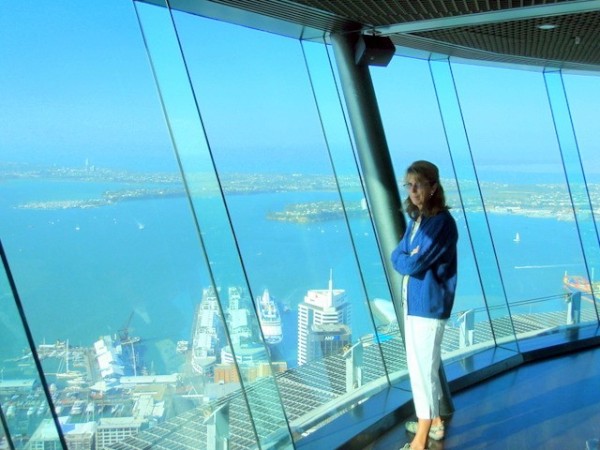 Taking in the awesome view from atop the Sky Tower

To see some of the sights we enjoyed from the Sky Tower, as well as more pictures of our visit to Sheep World, check out the “Tourist Attractions” photo gallery. Enjoy!