Lunch always follows church on Sunday in Vulaga, and is traditionally a large mea l- the biggest meal of the week. We were invited to have lunch with our hosts, Tai, Aquila and Koro, and four other members of their extended family. The women had been preparing and cooking our lunch since five a.m. All the food is fresh, as there is no refrigeration in Vulaga, and is cooked on an open wood fire. A beautiful variety of food was set outside on woven mats on the ground under a thatched palm frond awning for shade.

Being a non-adventurous eater I was sure I was in for a game of "dodge the food of unfamiliar origin or questionable texture". My gag reflex was on high alert! I was really hoping Bob, being the "I'll eat anything" person would draw attention away from my mostly empty plate with his full one, or that I could do my usual disappearing food act by discreetly palming food from my plate and making it appear on Bob's. I actually have had a lot of practice at this. Then I found out the normal custom is for the Fijians to watch you eat and when you have finished they eat what is left. OMG! What would I do now? 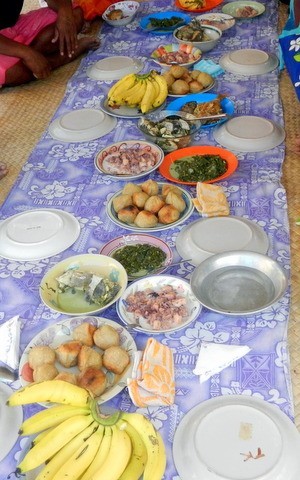 Thankfully our hosts did not abide by this custom and we all ate at the same time. Fried whole fish (including heads and eyeballs), smoked fish, curried fish, octopus in coconut milk, wild cabbage (like cooked spinach) cassava balls (which, we learned later, sink like lead when thrown overboard) and freshly picked bananas for dessert. We ate everything with our hands out of community bowls and baskets; no silverware here! It is perfectly polite to slurp any excess sauce from your plate and I could hardly hold back the giggles when a concert of slurps continued throughout the meal. For drink we had coconut water - fresh out of the green coconut - with a drinking straw made from the stem of another plant. 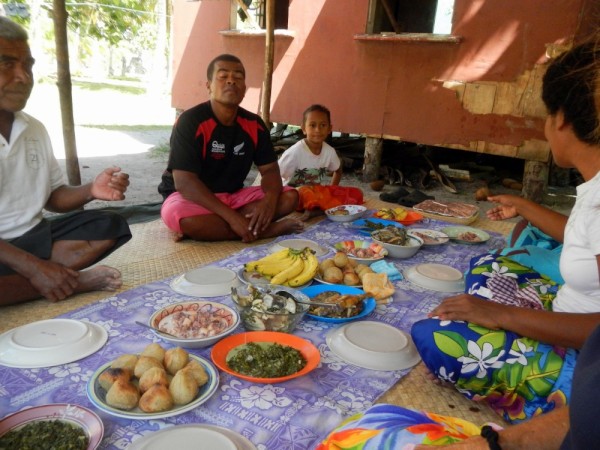 My contribution to the meal was a chocolate cake with chocolate frosting that disappeared at the speed of light. Chocolate is a rare treat in Vulaga, and anything with sugar as a key ingredient is a favorite. And almost as valuable was the disposable aluminum pan I baked and transported the cake in. Koro was happy to add it to her kitchen supplies. So many things we take for granted are a luxury here.

It really was a nice meal; and such an abundance of food! Imagine inviting guests for lunch knowing you will have to "hunt & gather" the food without knowing exactly what the sea or reef will provide that day. The only other local food comes from what the soil will produce. Here it is mainly cassava (a starchy root), bananas, papaya, coconut and mangoes. A supply ship comes once a month (maybe) with supplements of rice, onions, flour and sugar. We were very humbled by the amount of work and preparation that went into making this special meal and how generous they were to share their Sunday lunch with us. 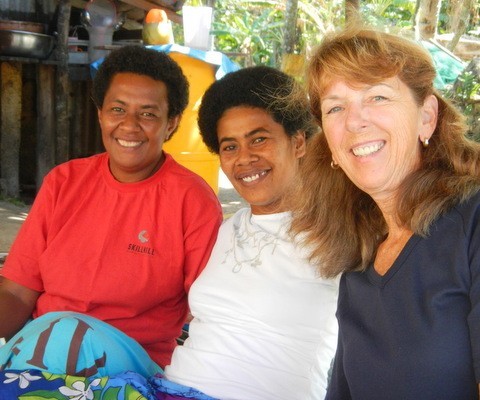 Koro (left), the shy one; Jasmine, the sassy one; and me, the pale "valangi." 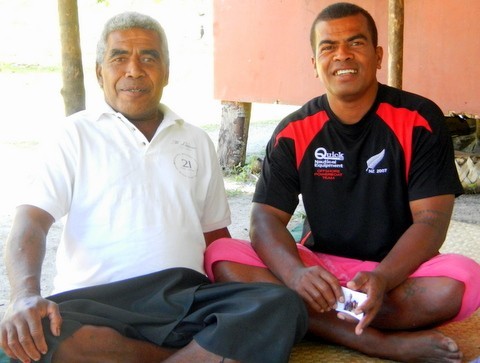 We had a great time trying new foods, talking about our lifestyles and families - differences and similarities - and laughing a lot. Food and laughter - the sustenance of life, no matter where you are in the world!
Comments
Newer Older
Contents