Adventures of sailing vessel Aphrodite, a Gib'sea 96, and her skipper.

16 June 2021
Sandy Garrity
Alex has kindly offered to crew from Plymouth to Edinburgh on my round Britain trip this summer and as we had not sailed together since our trip on Jammy Dodger last year we thought it might be a good idea if we got together and do some sailing before we set off on a 700 NM voyage. 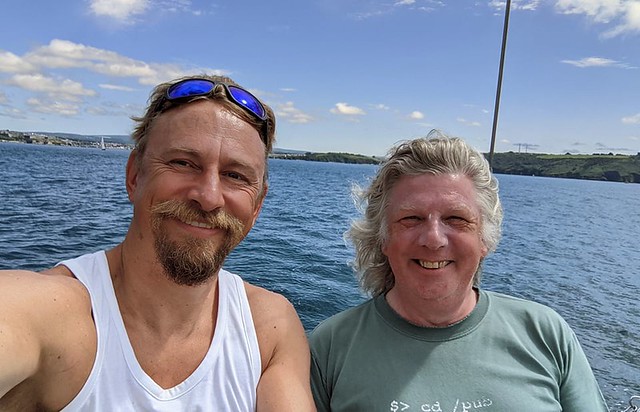 With light winds forecast and a spinnaker that has not been flown since I bought Aphrodite, and I don't believe the previous owners ever used it, and a crew that had never flown one! What could possibly go wrong? It looked an ideal ideal day to try it out. But first we wanted a few miles under the keel and headed out towards the Eastern Entrance of Plymouth Sound. With a plan of heading east towards the mouth of the Yealm before tacking and crossing Plymouth Sound to Rame Head where we would try out the kite.

While still north of the breakwater and as we were hoisting the main and genoa a MOD Police RIB came over and requested that we keep well clear as a warship (HMS Enterprise) heading out from Devonport. Slight change of plan, we kept to the north of the breakwater while the gray ship passed and slipped out of the western entrance behind her before turning east for the Yealm.

Just off Rame Head I called up the National Coastwatch Institute Lookout Station for a radio check as it had been some time since I'd used the VHF and they promptly came back saying they could hear me loud and clear, and I was visible on AIS and Radar. All systems working. I'll need to do a check much further out to sea to find out the range that I have from the boat. 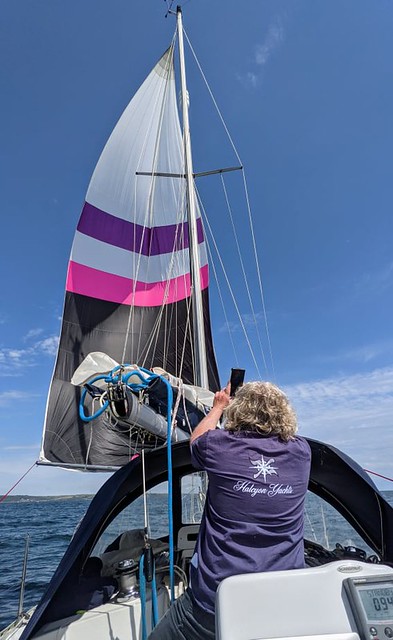 Off Round the Sound Again

08 June 2021
Sandy Garrity
As the weather was quiet and I wanted some 'reacquainting' myself with the boat, giving me time to listen to what sounds she made and pull sails up and down with no or little pressure of wind I took Aphrodite out for a sail on the seaward side of the breakwater.

24 hour forecast: Southerly or southwesterly, becoming variable at times mainly in east, 2 to 4. Smooth or slight, but slight or moderate west of the Lizard peninsula. Fair. Good.

04 June 2021
Sandy Garrity
My reports of speed over ground (SOG) and speed through the water (STW) surprised a couple of my friends in the marina. In other words they were highly skeptical and we arranged to do some 'calibration' with Steve on Red Snapper.

As I had a bit more work to do on Aphrodite to do, there seems to be a lot of that at the moment. Steve headed out for a few hours sailing before meeting up at the Eastern Entrance of Plymouth Sound around high water when there would be little movement in tide and we could check speeds with each other.

I motored out about 1230 UTC and watched HMS Scott, one of the Royal Navy's survey ships depart the sound, and just before 1330 Steve came over and tests commenced. 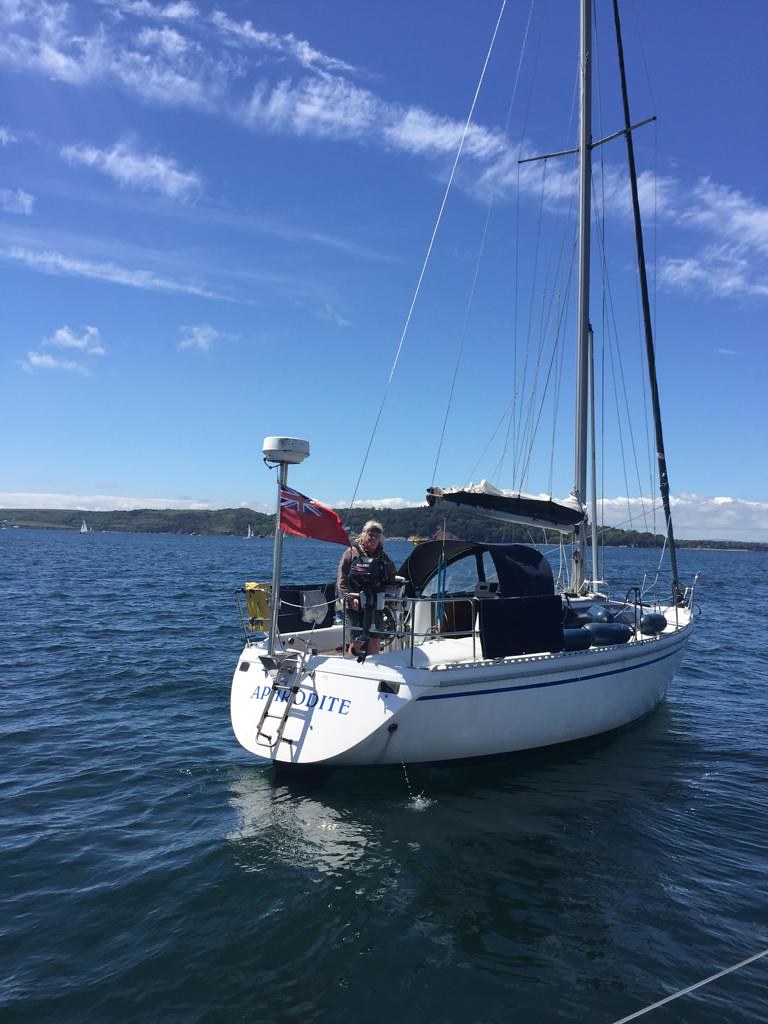 Lining the two boats up we headed off under engine, giving us more control over speed, on the same heading.

Above the sound of two engines we failed to hear each other and resorted to calling each other on the mobile phone, calling out the speeds we were displaying. Much to everybody else's surprise they were almost identical.
One more check in the box on boat preparation before heading to Kirkwall.

Tests completed Steve headed west to Cawsands and I turned back to King Point. 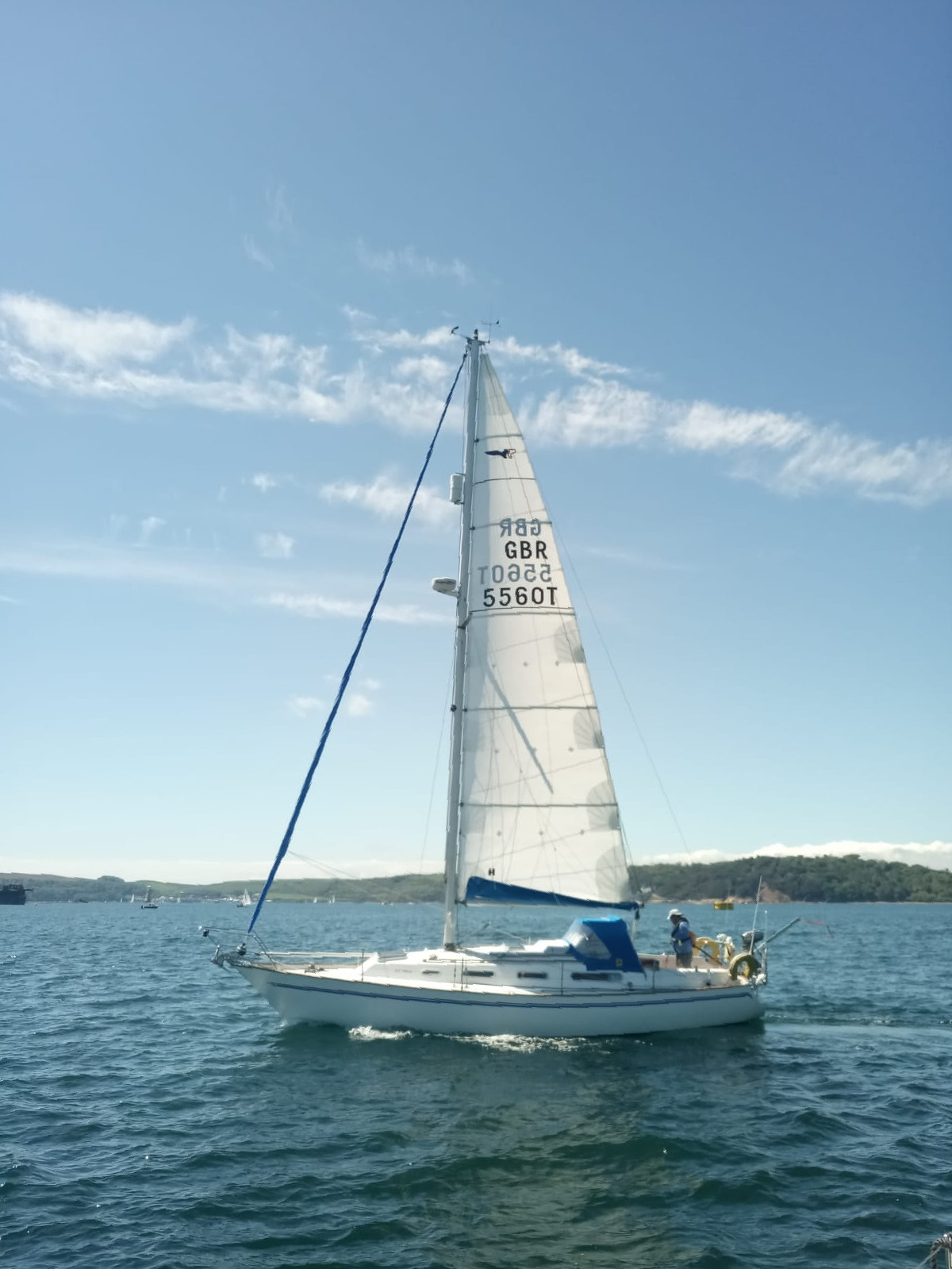 02 June 2021 | Plymouth, UK
Sandy Garrity
The time had come to sort out some rusty skills and handle the boat on my own. I headed down to the boat and took ages getting her ready to take out. There is always some nervous anticipation the first time in a season when you let go or the pontoon or mooring on your own.
You know that you need to deal with anything and that is why I find single handing so rewarding. Got a problem, up to you to fix it.

Having 'faffed' about checking and rechecking things I finally set Aphrodite for sea, everything stowed below, sails ready to be hoisted and unfurled, engine on, spring line set and mooring lines let go. I was off.

Left the mooring without damaging any gelcoat, set off towards the marina entrance through Millbay, passed Drakes Island and into Plymouth Sound. Thankfully not too many boats about. Made my way over towards Jennycliffe to seek some shelter from the wind to haul the main sail and away from sets of eyes as I knew this was not going to be pretty.

Hoisted the main, a slight tangle in the lazy jacks that was easy to sort out. Settled down with the main up and the engine in neutral while I got used to the boat under sail again - it had been some time since I had last sailed. Finally pulled the genoa out to its first reefing point, turned off the engine and off she flew! 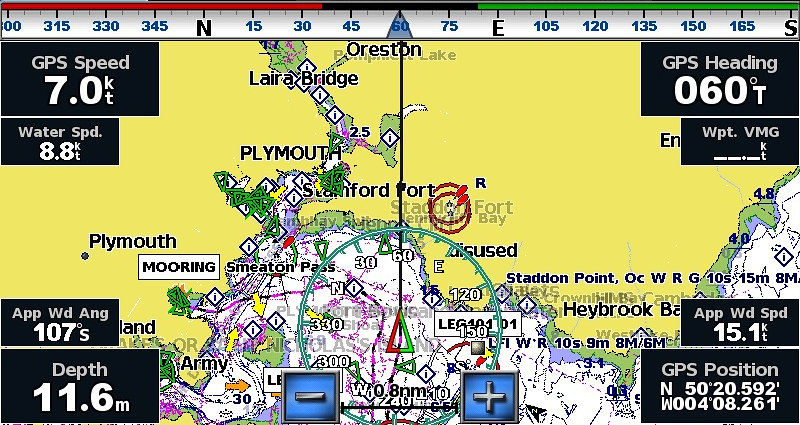 With visibility beginning to close in, the Met Office had it right I dropped the sails and motored back to the berth.

Brian, who occupies the next berth, came over to help with the lines or perhaps to check I was careful with his gelcoat and I glided into my slot. Tidied up the sails and went below for a cup of tea. On emerging Drakes Island was shrouded in fog.

Relaunch and a Visit to SV Bora Bora

28 May 2021 | Plymouth, UK
Sandy Garrity
I got down to Mayflower marina for 0700 UTC well in time for relaunch. The lifting crew arrived and had a cup of tea, what better way to start the day, before starting up the lift and relaunching me.

Being invited to go onboard with the boat still in the strops, half in and half out the water so I could check the through hull was watertight was a bit odd, but I had witnessed a boat sinking at Topsham a few years earlier because the owner had not fitted a through hull, and thought it was a excellent way of avoiding a flooding. The team walked the boat round to the fuel pontoon and it was then my turn to put the kettle on for a cuppa.

With the new depth sounder uncalibrated I was surprised at how close it read to the original, about 0.20 meter difference.

As I turned on the engine ready for departure one of the predicted showers arrived, a French friend calls them "waso pepe", roughly translated bird pee as they are so short. Set the lines for my usual single handed departure and one of the lift team assisted me, perhaps they were keen for me to get a move on as the next launch was being lined up.

Chugging out passed the pontoons it was good to finally see water speed, depth and water temperature (still too cold for swimming in my book). Passing a big red vessel on one of the pontoons I noticed that it was flying an A flag and a couple of chaps were holding pipes over the side, so took a wide slow course round them and headed up the Tamar towards Saltash where I had arranged to raft up with Bora Bora and her owners Morris, Steph and the dog Lammy.

I had not been up the Tamar since doing my RYA Day Skipper some years before. Passing the naval dockyard at Devonport is always interesting with lots of activity then you need to pass the fearsome jaws of the Torpoint Ferry. Three chain ferries that cross the Tamar and have right of way over any other vessel. With the ferries to contend with and being followed by a Landing Craft it made for an interesting half hour.

Just as I passed the entrance to the River Lynher I called Bora Bora and arranged lines and fenders. Lined up with appropriate line of trot moorings and slowly worked my way up the line until I spotted the boat. Rafting up is always a controlled crash, at least I was doing about 0.5 knots when we came alongside.

All tied up, I stepped aboard and was warmly greeted with a bottle of whisky! 1000 hours is usually too early for a dram, but as this was a special occasion we took exception and poured a small "taster." 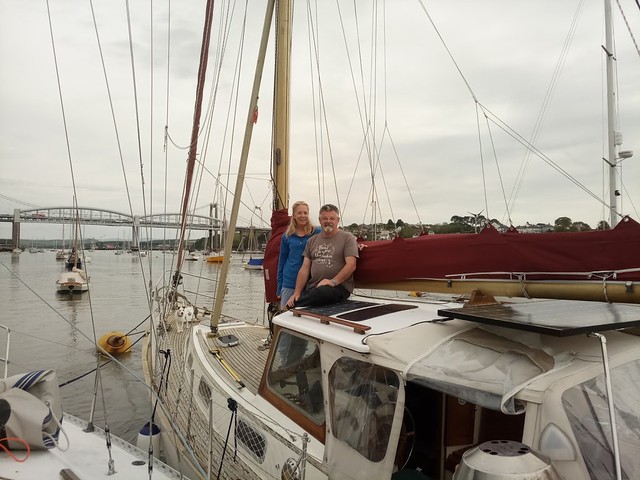 News and talk of our summer's sailing plans were exchanged and I departed for the return trip down river. This time with the ebb tide and the trip was done in half the time as I had made it up river.

After an hour in Plymouth Sound where I had some space to do some maneuvers under engine to get the hang of the boats handling characteristics as it had been some time since we had been out in her. As ever she was faultless under engine and I am convinced that there were a few odd looks as I performed figures of eight going forward and backwards.

Time to head in and have some lunch, I don't think I'll ever be comfortable entering marinas, but arrived safely back on the berth with no damage to the gelcoat - result.

Aphrodite's Photos - Main
No items in this gallery.