Jumping ahead just a bit 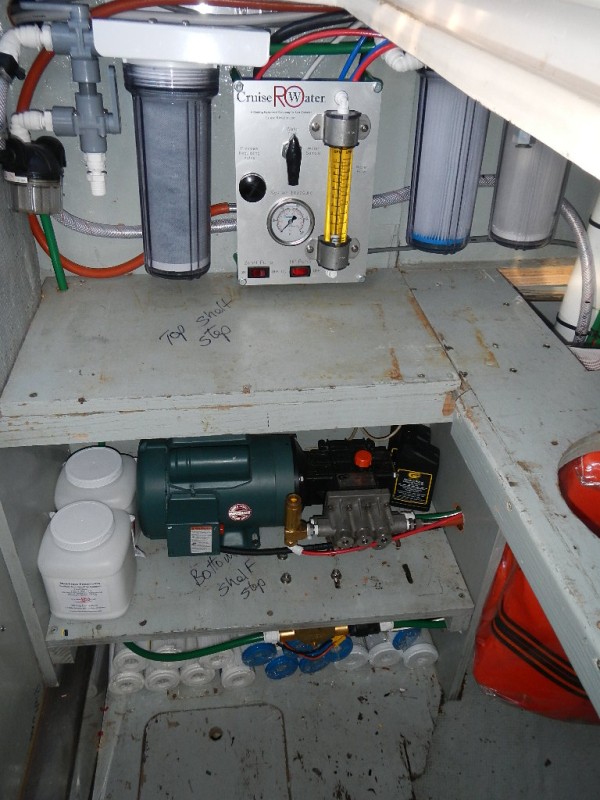 Papillon had, at one time, some sort of watermaker installed but when we purchased her, that watermaker had been removed and the only things left were some wiring and a hose or two.
After we researched many different watermaker solutions, we decided that the CruiseROWater SM20 was the best product we could find. This decision was based on the product, the price, the output per AH, and most of all, the service behind the product.
Rich Boren, one of the partners behind CruiseROWater is a self-professed “Cruising Bozo” and while the cruiser part is true- a “Bozo” he is not. He stands behind every product personally, and in this day and age, that personal responsibility is worth a lot more than just dollars.
So, here we go- we have this big pile of parts and pieces and have to start thinking in spatial relationships and placement of components. The pile of parts is not that much of an issue but the challenge of where to put everything while keeping as much storage as possible is.
There are certain requirements- filter changes being primary with control panel access being as much of an issue. Access to the face of the 12V boost pump for the inevitable impellor failure was next and then high pressure pump access- OK, a lot of little factors all added up to more than a little head scratching.
Where to stack all of these things while trying to fit it onto a boat? In all seriousness- this took ten times as much effort and calculations as actually installing the equipment. Maybe if I wasn’t, 1. A packrat, or 2. anal about functionality this would have been easier, but I really wanted it to be right the first time.
After many hours of sitting in the lazarette facing the location I decided I wanted the unit placed at, and more than a few second guesses, and second opinions from friends, the mounting scheme was decided upon and we were off!
First came the pump mounting. The requirements for that are ventilation space around the rear of the high pressure pump, a fair lead for the hoses in and out, access to the top of the high pressure pump body for oil, access to the front of the boost pump, and some protection from water ingress to the electrical parts- always a bonus round there.
I had some existing shelves where I assumed that either the prior watermaker assembly was mounted or the prior dive compressor was- either way, they are sturdy! I took the bottom shelf and mounted the boost pump under and the high pressure pump over. Under the shelf is perfect storage for all of the consumables- filters and whatnot that are needed. 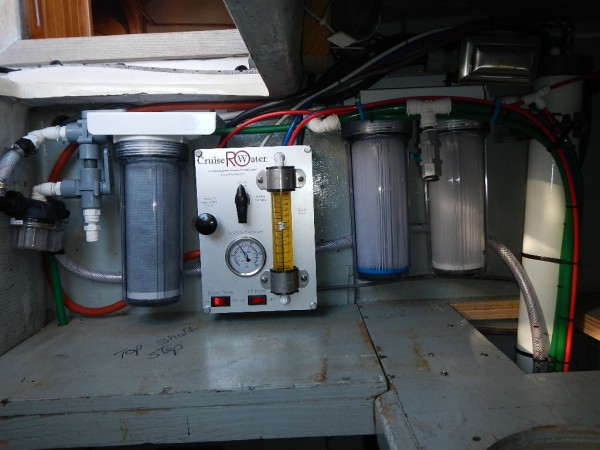 With that out of the way, the next challenge, and by far the hardest part of all of this, was to figure out where to mount the pressure vessel, at a little more than 48 inches in length and the requirement for it to be within a certain range of the pump and control panel, this was no easy thing. Finally after considering every possible permutation and configuration, it was determined that a little judicious work with the jigsaw was in order.
Next there are the twin filter assembly, the carbon filter and valve assembly, the control panel, and I put in a small sea strainer as well- the requirements for these units are the access to the filters for replacement (a few inches at the bottom works), again the fair leads for the hoses in and out, access to the valves for brining and flushing, and a good view to the front of the panel to see the pressure gauge and flow meter.
Now that took a day or two of juggling pieces to get settled! Once I did decide, the mounting of the filter units was a piece of cake, but the panel mounting was just a little challenge. How to mount this nicely designed panel so it floated off of the bulkhead? Well, after doing the feed piping there was about 15 inches of ½” poly left- I needed to mount this panel with about 3 ¾” of clearance to the rear- the math worked! Using the ½” poly hose around ¼”x4 ½” lag bolts gave the perfect offset and looks good to boot. 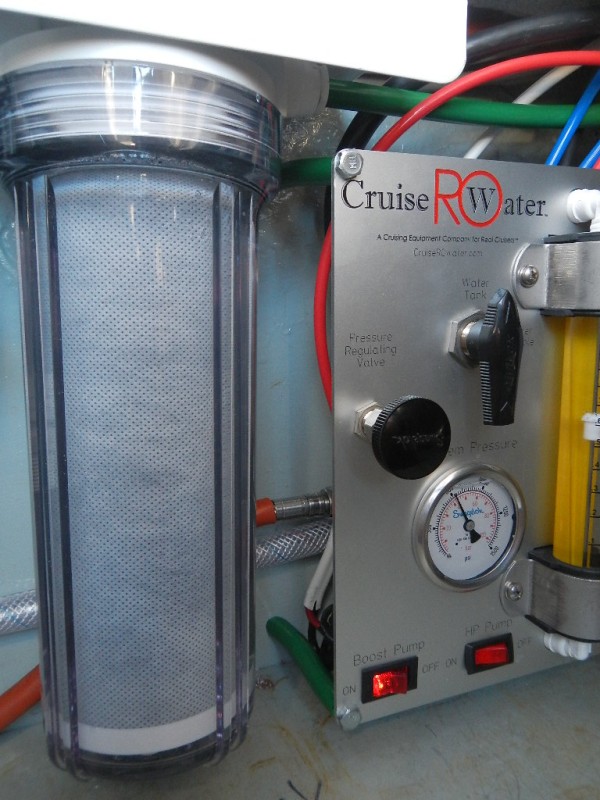 The way this all worked out was pretty nice, but it did seem that there are a lot of hoses going back and forth, but that is a function of the order I had to mount the units in and not of any complexity involved.
The last, and easiest, challenge was to wire everything up. The prior unit was three phase 220 and this is standard 110- that only took a little bit of work behind the breaker panel and we were rewired for 110 and ready for the big test! Firing up the boost pump and bleeding out the air from the filters was pretty rewarding, but after checking for leakage, at the myriad of connections and finding none, I was ready to kick this dawg into gear! It fired up and was flowing great while I turned it up to 600 lbs of pressure- good stuff and a requirement to run it at 600 for ten minutes to break in the pressure vessel.
Cranked it up to 800 and in one of the saltiest seas on earth- the Sea of Cortez- I hit about 28 gph! Happy, happy, joy, joy!
The access to basically all of the fresh water we would ever need is one more line releasing us from shore life and while it isn’t the cheapest thing we will ever do for the boat, it is certainly one of the most valuable.