Alison and Geoff's Adventures Together - in Summary Photo shows villagers from Sideia Island in Milne Bay, PNG stopping by for a natter in 1997.

Many people have children; many more count their progress through life in terms of house(s)and possessions. We see our opportunities to experience the planet's beautiful places and biodiversity as our riches. Despite what it may seem, we have to work for every cent to pay for our journeying - we write articles for the internet since giving up teaching - from time to time! Fortunately, most of the best things in life are free or at least pretty cheap.

We met in the dole office in Lisson Grove, London in 1977 (working). Geoff got his first teaching job in Timaru, NZ in 1978 and Alison flew out to Christchurch a little later. We bought a share in some land West of Mt Ruapehu in a communal land title in the Upper Ruatiti Valley, but the horizon was already beckoning. Islands do that to you....

The following is a brief summary of our joint exploits together. 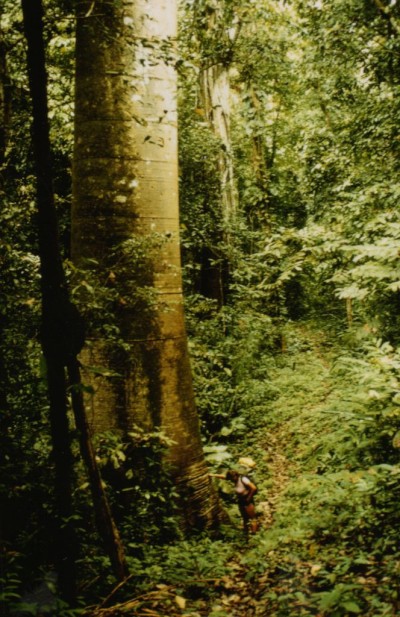 Crossing the Darien Gap from Colombia to Panama in 1983 - one of our most challenging adventures.

• 1985: From London to Singapore, Jakarta, New Caledonia to Auckland.

We filmed the trip with a chunky videocamera and made a (very) amateur documentary called "4 Wheels, 4 Boots and the Bush" complete with plummy accents and weird pipe music from an Andean group called Illi Intimani. We still have DVD of the film.

• 1987: By 54 year old kauri sloop "Corsair" across the Tasman to Noumea and New Caledonia's Southern lagoon, across the Coral Sea to Bundaberg in Queensland, Great Sandy Strait to Brisbane. No radio or liferaft; a 25 pound plastic sextant and a broken compass to navigate by and a 50 dollar wind vane made at the last minute of bits of plywood and string!

• 1988: From Brisbane up the length of the Queensland coast to Cairns, then across to Port Moresby in Papua New Guinea.

• 1989 : From Port Moresby two attempts to cross the Papuan Gulf in the cyclone season, then by plane to Cairns, Brisbane, Stanthorpe, Sydney, Auckland, the Bay of Islands, back to Port Moresby and then the remote jungle village of Ihu in the Gulf Province where we began our longest teaching career with the PNG Department of Education. We did try to get Corsair into the wild unmarked entrance of the Vailala river where the school was but nearly drowned on the bar and had to beat 150 nm back to Port Moresby.

• 1990: Across the Papuan Gulf to the P.N.G. island of Daru in the Torres Strait. Up the Oriomo River we lost use of the engine and floated with the current for nearly 40 km downstream. Later, we carried a teacher and his extended family of 12 along the coast towards Saibai in "Corsair".

• 1992: Across the Torres Strait to Thursday Island and back to Daru through the reefs, still without an engine. Anchored off the Federal pub in T.I. through the edge of a cyclone.

• 1993: Again across the Torres Strait without an engine, but back to Daru with it back in working order!

• 1995: Sailed back to Port Moresby and then on down the Papuan coast to Milne Bay where we taught for 2 years in Cameron High School, Alotau.

• 1997: Sailed amongst the islands and coast of Milne Bay - the D'Entrecasteaux islands, Cape Vogel and Tufi peninsula, Amphlett, Engineer, Conflict, DeBoyne, Misima and the Calvados chain; on behalf of the local tourist office we talked to villagers about ecotourism and what they thought about it and researched anchorages for a book we ever completed.

We finally made it up to Port Moresby to try and sell "Corsair" and briefly to Brisbane.

• 1998: We flew to Cairns and bought "Saraoni"- named after the island protecting the beautiful bay at the end of Milne Bay we had so frequently sought refuge in. Sailed again down the length of the Great Barrier Reef, through the Sandy Strait, Brisbane, the Northern New South Wales rivers en route to New Zealand. A surprising twist in our fortunes took us sailing North to Townsville again and then across to Darwin in the Northern Territory, where we stayed for three years teaching in local schools and colleges.

• 1999: Flew to West Timor and travelled to the East Timor border by bus; walking trips to Katherine, Kakadu and the Litchfield plateau. By yacht to the Adelaide River, Bynoe harbour and a long spell in Port Essington - Gurig National Park.

• 2000: Port Essington again and over to the Tiwi islands.

• 2001: Set sail for New Zealand via the length of the Arnhem Land coast, deep into the Gulf of Carpentaria, Cape York, and a sprint along the Great Barrier Reef coast to Bundaberg, then on to Brisbane and the Gold Coast.

• 2002: Saraoni - and us - safely arrived in New Zealand. Solid teaching through 2003, but many walking and sailing trips from the Hauraki Gulf as far North as Houhora.

• 2004/5: We cycled from Auckland down the East coast of the North Island via Tauranga, Whakatane, East Cape, Napier, Cape Palliser to Wellington; Returned via the West coast Taranaki, Kawhia and Hamilton. Tramping journeys through Kahurangi, Nelson Lakes, Arthur's Pass and Stewart island.

• 2006: Set sail from the Bay of Islands, NZ via New Caledonia to Bundaberg in Queensland. Cycled 1,300 km from Bundaberg to Newcastle in New South Wales on a couple of cheap bikes from Big W.

• 2008: Sailed up the Australian coast to Cape York, across to Darwin and to Timor, Lembata, Flores, Komodo islands, Sumbawa, Lombok, Bali, Java, Borneo, Sumatra in indonesia to Singapore and Malaysia.

• 2009: Sailed to the Andaman coast of Thailand, then cycled 1,100 km up through Malaysia. Side trips to mainland Thailand, Laos, Vietnam and Cambodia.

• 2010: Sailed from the Andaman Islands to Sri Lanka, then India, Oman, Yemen, Eritrea, Sudan, Egypt, Israel and then Turkey. A 1 month trip to old birthplace England to see if we could make money teaching. Our next trip put us on the road to our little writing business, which we still have wherever we are.

• 2011 Turkey and the Greek islands of the Aegean. Overwintered in Crete. Side trip to Nepal where we clambered around the Annapurnas and up in the Helambu area.

• 2012: Sailed to Italy, France, Spain, Morocco and the Canary Islands. Side trip to South Africa and Swaziland.

• 2013: Sailed to Gran Canaria, then Tenerife. Flew to Barcelona, South of France, U.K., New York and walked parts of the Appalachian and Pacific Crest Trails, with a side trip by car down the Oregon coast. Sailed from Gran Canaria to Tenerife and then South West to the Cape Verde Islands.

* 2014: Sailed to Suriname, on the South American coast across the Atlantic in 17 days. Then sailed up the coast to the island of Tobago, Grenada, the Grenadines and then the ABCs. Side trip to the U.S. where we bought a couple of cheap bikes in Salt lake City and cycled up through the Rockies to Yellowstone and across to Idaho, then down from Southern Oregon to San Francisco through the redwood forests. Later sailed from Curacao to Aruba, Colombia and Panama. Made a side trip to Costa Rica at the end of the year.

* 2015: We transited the Panama Canal in February and crossed the Pacific to New Zealand via the Galapagos, French Polynesia, the Cooks and Tonga. Completed our circumnavigation on passing the Ninepin into the Bay of Islands in late Novemnber.

* 2016: We walked 500 km from Tutukaka to the Volcanic Plateau, part of the Te Araroa (The Long Pathway) as well as quite a few km by thumb! A couple of months floating around the Northland coast, then a flight to Niue "the Rock" where we stayed for a week. In June we flew to LA, drove to the Sierras and Yosemite NP, then bought cheap bikes in Vancouver, B.C. and rode 2,000 km across the Coast Range and the Rockies to Calgary in Alberta.

*2017. Getting itchy feet, so flew to Australia in Feb, bought 2 more cheap bikes in Sydney and cycled nearly 1,000 km to Melbourne's outskirts, plus some easy, but nice touring, in hire cars around the Blue Mountains and the Great Ocean Road at each end. In June, after a long wait in the Bay of Islands, we sailed again up to the islands. First to Minerva, then the Tongan chain, Fiji's islands, Aneityum in Vanuatu and finally New Cal. We will be leaving the boat here in New Cal. while we use the cyclone season for other adventures in Tasmania, then return in April 2018 for a circumnavigation around Grande Terre.

*2018. Completed half of the long distance hiking trail, the GR1, from Parc Riviere Bleue to Dumbea, a 5 day hike across the main range. These tough hikes getting harder! Then bought bikes and set off around Grande Terre via Koumac. 600 km then back by bus from Hienghene. Flew to Hobart, bought 2 $50 bikes and cycled 1800 km to Adelaide via the Tassie East coast, Cradle Mountain and the Coorong in SA. Returned to New Cal. and completed a circumnavigation of Grande Terre. Sailed across to Bundaberg in Australia and searched for a larger boat.

*2019. Purchased "Sundari" a Beneteau 473 in Southport. Anchored in the Broadwater in the Gold Coast with 2 boats with Saraoni up for sale. Flew to Chistchurch in October and spent three months walking in the South Island.

*2020. Cycled from Opua to Dargaville in Northland after a brief trip back to Australia. Covid arrived and changed everything. We made it back to Sundari, finally leaving Scarborough marina and sailing to the Keppels and back as well as a long trip to the Queensland outback in our campercar.

*2021. Spent 2 months on a road trip from the Gold Coast through New South Wales, Victoria and South Australia. Completed an 8 day walk along the Victorian coast and a 3 dsy canoe trip down the Lower Glenelg river in western Victoria. Bought a small piece of Lamb Island as insurance for the future and sailed 400 miles north to the Whitsundays.

Sailing Around in Circles Until Covid Vanishes