May 2006 - we follow the South African yacht "Mahimahi" down Whangarei harbor with Manaia and Bream Head to port.

Summary of the first few months of our circumnavigation between the Bay of Islands, New Zealand and Bundaberg in Australia via New Caledonia.

We finally left RayRobert's Riverside Drive marina in Whangarei in mid May and sailed up to the Bay of Islands via Tutukaka. As we had told the management that we would be away for several years we just anchored in the outer bay rather than take up our marina berth. It was lovely Autumn weather in Northland and we enjoyed the last week or two of May in the sunshine getting our last spares and supplies before trekking North towards the tropics.

Set off on June 6th with a good forecast. Had to heave to off the Cavallis with water mysteriously filling the bilge. Suspected it was siphoning in through the toilet system, but this had never happened before. We were also unhappy with the self-steering which needed fiddling with far too often.

The final straw was when my (Geoff) only pair of glasses fell overboard fiddling with the wind-vane approaching North Cape, so we made the decision to return to the Bay of Islands to fix all three problems properly and then leave on the next window. Not long after we tied up on a spare Kerikeri mooring the heavens opened and a storm blew through - a so called weather "bomb" - it was very uncomfortable in the river and almost impossible to get ashore. The last part of June we commuted between the various bays around the BoI watching the weather carefully.

Gave up the crossing at the end of the first week in July and retreated to Tutukaka to lick our wounds. More importantly, we fixed the problem with the self-steering by adapting the emergency tiller and the loo problem simply by clearing out loads of calcified 'gunk' in the outlet pipe. We were able to get a nice, cheap car hire in Whangarei and plenty of relief work meant at least we weren't going backwards financially.

Finally saw what we thought was a comfortable weather window up into the tropics and as luck would have it we were given a week long contract at Kawakawa's Bay of Islands College just before the window started which put a neat $2,000 into the cruising kitty!

Our Trans Tasman crossing proved to be relatively cushy. The Tasman was in tranquil mood most of the way - so tranquil to begin with that the huge white and black albatrosses we passed were a bit put out with not enough wind to launch themselves. Apart from finding it very hard to sleep, the trip up was pretty uneventful and we were able to chuck the anchor down off a nice white sand beach, palm and pine trees at Kuto on the Isle des Pins within a week after leaving the Bay of Islands. 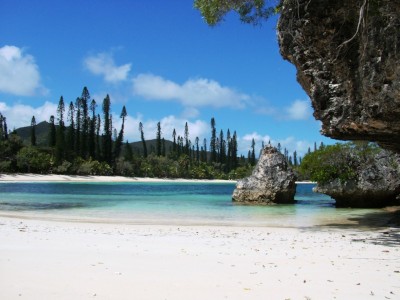 Spent the first few weeks around Baie du Prony and off Isle des Pins South of Noumea and the last few weeks North in the Baie de St Joseph area.

We were last up here in this bit of "France" 19 years ago, so it's been interesting exploring the changes - in the eighties, more revolutionary times everywhere, and New Cal was racked by attempts by the indigenous Kanak (Melanesian) nationalist movement to get its independence from the "Metropole". The colony is one of France's best overseas investments with huge nickel mines so it was never going to relinquish control too easily - on the surface everything seems pretty orderly and affluent -especially on the west Coast and around Noumea where we've spent most of our time. Funny for us to see burly Melanesians, looking otherwise just like Papua New Guineans, kissing each other on the cheek, giving the limp French handshake and playing chess and petanque in the main square in the city.

The trade wind has been unseasonably strong most of the time we've been here, so we haven't been able to explore the myriads of little coral cays and reefs in the lagoon as much as we'd have liked, but have still enjoyed all our explorations. Southern Grand Terre (the main island) is a harshly beautiful place, not quite like any other in the South Pacific. Seen quite a few dugongs - one just off a crowded Noumea city beach, turtles and a humpback whale further south in the lagoon. Plenty of walking and climbing potential and we thought we might bring the bikes over at some other time for a circumnavigation as the roads have little traffic and are mostly paved. 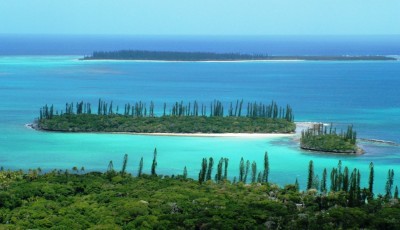 Back to Noumea and got ready for the last ocean leg this year across to Bundaberg on the South Queensland coast. Very windy as usual and then mini Cyclone Xavier turned up - in the Southern Solomons. This was very early - too early in fact - and we got caught up for a while in the port of Noumea's cyclone preparations. Thankfully, nothing came of it and the cyclone just fizzled out. We set off with light winds forecast and expected a 6 day crossing.

Arrived in Hervey Bay with light winds. Lost our staysail over the side and it sank before we could retrieve it -damn! Got into the Burnett River well before dark; completed Customs and Immigration and found a bottle shop at Burnett Heads after a very long walk through the back roads. Relocated up the river to Bundy Town moorings and bought two new cheap bikes from Big W. The idea was to cycle down to Sydney, buy a car and bring it back to Bundaberg so we could use it for teaching. Everyone thought we were mad because it was so hot. Set off on the bikes and made good progress every day by getting up dead early and then finding a camping site before noon - preferably one with a swimming pool or near the sea!

Finally arrived in Newcastle, almost in reach of Sydney. Found a cheap car - a red Daihatsu Charade and we piled the bikes and newly acquired camping gear into the little squirt of a car and set off back through the dry New South wales hinterland to Queensland. Stopped at the Border Ranges NP with bellbirds in full throttle. Saw an echidna on the New England tableland. Back in Bundaberg, we dropped the car off with friends John and Heather and sailed down to the Great Sandy Strait. This has always been one of our favourite parts of the East Coast. Turtles, goannas, dolphins, wallabies and the sand forest on Great Sandy Island. There were quite a lot of boats around but not enough to be a nuisance. 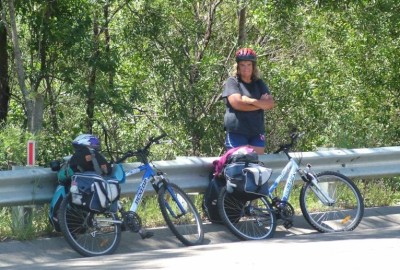 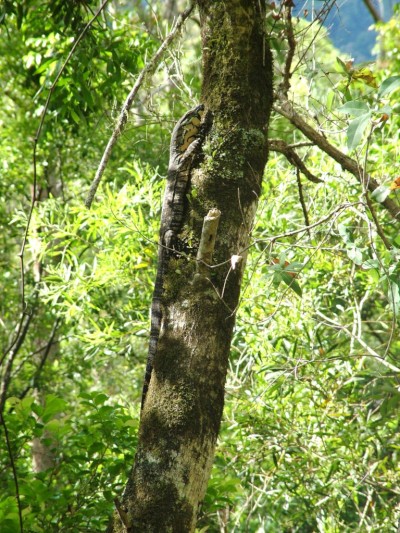 Goanna on Fraser Island in the Sandy Strait 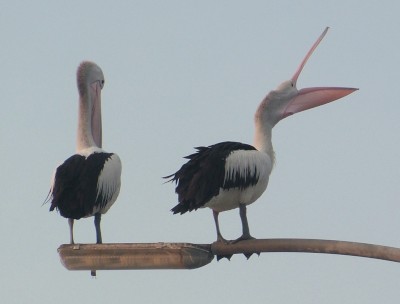