A Tale of Three Boats Corsair was our first boat, purchased in June 1986 in Auckland. It was a 30 foot (9 metre) timber sloop with the hull built in kauri in 1933 by Fred Lidgard. The Lidgard family were well known boat builders and the family tradition has been continued to the present day by John Lidgard.

Corsair was originally built as a gentleman's racing yacht for the Hauraki Gulf area for Roy Lidgard, who apparently disappeared on his way to Fiji in a fishing boat he was delivering. There is a legend which says that his wife kept a light burning in the window of their Kawau Island house hoping for his return.

The mast was solid oregon and originally the boat was not designed with an engine in mind. When we first removed the mast from the boat in Cairns in 1987 we discovered a few coins in the mast step - including a 1947 NZ halfpenny!

Various people had owned Corsair before we bought it and it had been kitted out pretty basically for cruising. It also came with several broken ribs and more problems known and unknown than we were probably able to deal with!

But it was cheap for its size and we had, probably rather naively, a vision of preparing the boat for the ocean, and sailing it back to England!

We spent the first six months working hard on just about everything with Corsair up at Lane's boatyard in Panmure, Auckland. The professional boat builders worked on doubling up the ribs, improving the cockpit and companionway and marinising a new Kubota diesel engine we had bought with the boat. We knew very little to begin with, but soon learnt that the more we knew, the more we were able to do ourselves and the cheaper it would be! This message has been a recurring theme throughout our boating life: self sufficiency and skills are a real asset. However, we still remain basically motivated by exploration and nature -

Corsair on a mooring in the Tamaki River at Panmure, Auckland, just after purchase in 1986

We owned and lived on Corsair for 12 years. We sailed in it across five stretches of ocean and never regretted any of the time spent on her. The boat was eventually sold in our absence in Port Moresby to an Englishman, who again had grand dreams. We have no idea of its movements or whereabouts since 2000. 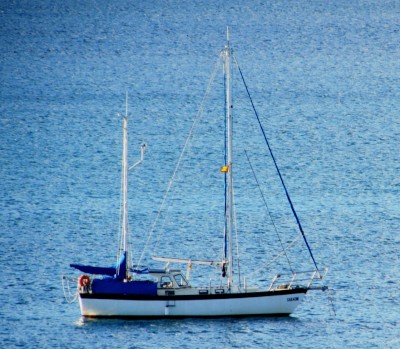 Saraoni was our second and present boat. It is a fibreglass South Coast 36 ketch, which means that it is 36 feet or 11 metres long the deck, although the presence of a bowsprit, davits and windvane make it longer overall. The boat hull and deck were manufactured in Port Kembla, NSW, and purchased by Keith and Vivienne Kingsland from Nowra who completed the fitting out, some of which was professional and some was done by themselves.

The original boat name was "Tekin JB" which meant "escape from Jervis Bay", where Keith and Vivienne lived. We renamed it "Saraoni" from the PNG island that protects the mouth of Kana Kopi bay at the entrance to Milne Bay in the Eastern end of the island of New Guinea: probably one of the nicest anchorages we have spent time in.

Saraoni is now 28 years old, but basically in good shape. The engine is a four cylinder 38 hp Nanni diesel, installed in Lanzarote, Canary Islands in 2013 so quite new. Reluctantly we had to buy and fit a new propeller in Mindelo, in the Cape Verde Islands later the same year.

Saraoni has a centre cockpit which is very comfortable, a large hard dodger which makes beating relatively dry, a main saloon, a fore cabin where we sleep, and an aft cabin which could be used by guests and is otherwise used as everything from an office to a storage space for surplus boat stuff. There is place to sleep in the main cabin, the cockpit or the saloon deck depending on numbers and weather.

There is a small galley along the port side, a separate shower and toilet and an engine room.

Compared to Corsair, space for stores and personal junk is great.

Steering is by hydraulic wheel operation, while self steering is by electric autopilot if motoring, or by Fleming wind vane linked to an emergency tiller for ocean passages.

Sails include a furling genoa and main, a stay sail and mizzen. The height of the main mast and the ketch rig means that downwind sailing can be slow in light winds, but it is well balanced in other wind directions, when the full spread of sails can be used.

We have a small desalinator to make freshwater, an AIS radar detector useful in detecting large ships, and a wind speed indicator to tell us what our eyes can already guess at! There is a SSB for long distance radio communication and a VHF for shorter distances. The rest of the electronic clutter includes a pactor modem for HF generated emails and weather GRIBS, GPS's by the bucket, chartplotters, computers and 2 echosounders.

Electrical power by non fossil fuel means appears to be adequate except to power the stove. We have one wind generator and five solar panels installed, which provide electricity for our navigation instruments, fridge lights, computers, vacuum cleaner, TV and anything else!

We have altered many of the features on the boat and have got used to its sailing strengths and weaknesses. At present there seems to be no strong motive for buying another boat - even if we had the cash!

As with many other yachties living aboard, our ecological footprint is relatively small compared to the average for a western "household" due to very conservative water usage, small space for consumer products, so few of them are bought and used, transportation by wind as much as possible and the use of non fossil fuels for electricity. Of course, this changes when we are holed up in port and buy a car etc etc!

We note that if the offshore rallies we have been involved in are anything to go by, Saraoni is on the smaller size of average - but size itself is not a complete guide to comfort and convenience. Just like mobile phones - or bicycles - there is an optimum range of size above or below which functionality suffers.

As for boat number three if there is one in the future it will probably be smaller and lighter and more fun to sail - unless we decide to cross any more oceans after returning to NZ.

Update - April 2019. Well, our prediction wasn't that spot on! We eventually bought a much larger yacht rather than a smaller one, and are now actively trying to market Saraoni. 'Sundari,' a 2002 Beneteau 473 is about twice the internal volume of Saraoni and a very different boat altogether. We haven't had it long enough to know how it compares, apart from comfort and space, so look out for an update sometime in the future!
Comments
Older
Contents