Back home to Shilshole This morning, Scoots was enclosed in fog again. We hung out, taking our time, eating breakfast, hoping that the fog would at least start to lift by 10 am, when we needed to think about leaving. The NWS again forecast "patchy morning fog," and while we were skeptical, we were also hopeful that the fog might actually burn off sometime soon. 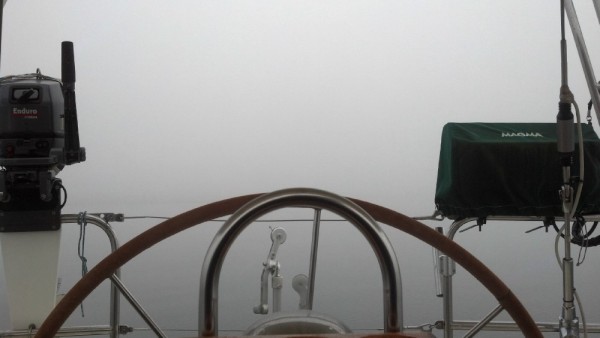 ...into a fog bank on Puget Sound. Oh well, after one day of sailing in the fog, what's another?

This time, I watched the radar, GPS and AIS, while Eric stood watch on the foredeck. Before he went forward, he showed me how to distinguish meaningful signals from noise, and then interpret them. Still, I can see it's an art form, that takes practice. When the fog lifted for awhile, I had the opportunity to compare what I was seeing on the radar with what I could see with my eyes. That was really helpful. Then the fog closed in again, and we had to rely on radar again, exclusively.

At one point, we had a boat a couple hundred yards off our starboard beam, that we could just see, and one incoming (according to the radar) that we couldn't see. We were using our fog horn, and the other boat was using theirs, and that incoming boat still sounded dead ahead. I turned Scoots about 10 degrees to starboard. Suddenly, the boat to starboard turned abruptly, crossed behind us, and came up on our port beam, about 50 yards away. Then the boat on the radar appeared, splitting the difference between Scoots and the other boat. Yikes! That was close, but at least we had seen it coming, on the radar.

Today, the NWS did a little better on their fog prediction: the "patchy morning fog" was actually that; it burned off just after noon, leaving us with shore-to-shore visibility and bright sunshine. We motored the last couple of hour in beautiful weather. I reclined on the dinghy and called my dad to wish him a happy birthday; porpoises frequently appeared off both sides of the boat. It was a great afternoon that could have been better only if the wind hadn't been light and on Scoots' nose and we could have sailed.

I drove Scoots into the marina. Scoots glided into her slip, Eric stepped onto the dock and tied her to shore, and we were home.
Comments
Newer Older
Contents