This morning, we awoke to to patchy light blue skies and a cold east wind. After a day of being cooped up inside Scoots, I was ready to spend some time outside--even if only for a few minutes. I made coffee for both of us, then suited up for the weather and drank mine in the cockpit.

What a beautiful morning! Everywhere I looked the sky wore pastel shades of blue, gray, even a little pink. The gulls were cruising around the marina, bullying each other off the prime perches, and complaining loudly about nothing in particular. One juvenile gull walked the docks, as he does every day, begging plaintively with high-pitched chirps. The adults that he approached turned and walked away, the seagull equivalent of "Get a job!"

FOUR bald eagles flew over the marina, all at once. Four! They came in low, calling and circling, as each one staked claim to a different perch: two on fishing boats and two on the breakwater poles. 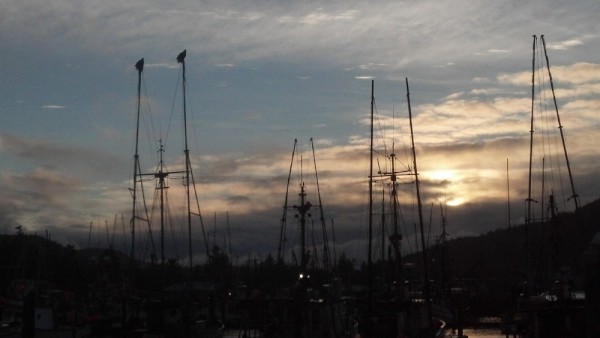 Bald eagles look so regal as they soar majestically on broad, outstretched wings. But they don't always act regally, stealing food as they do from smaller birds, and they certainly don't sound regal. When those big, majestic-looking raptors open their beaks, the noises they emit sound like the squeals of a puppy being whacked with a rolled-up newspaper: "Yip! Yip! Yip! Yip!"

I know what you're thinking: "No! I've heard eagle calls on TV. They have a powerful, regal-sounding scream."

Well, actually, the sounds that are often superimposed on eagle videos are the calls of red-tailed hawks. They have regal-sounding calls--calls you'd expect an eagle to have--so the video producers sometimes swap them in to maintain the illusion. What? Illusion on TV? No!

As I was drinking my coffee and listening to wimpy eagle calls, I noticed the masts of a ketch sliding by along the other side of the breakwater, toward the entrance to the marina. Eric and I were excited at the prospect of having another cruising boat on the dock: "We could invite them over for tea!" But alas, the masts stopped moving before they reached the marina entrance, and then they turned, slowly, inexorably, into the wind. They'd anchored out. This not being "let's go visit someone in our dinghy" weather, we knew there'd be no tete-a-tete tea today with the other cruisers. Oh well.

Soon after, while we were eating breakfast, we noticed first one pair of legs in pants, and then another, through the cabin windows. People! On our dock! The first ones we'd seen on our dock in nearly a week. We opened up the companionway, poked our heads out, and said, "Hello," startling the four people standing on the dock. The two men and two women were visiting Neah Bay (why?) from Russia and Japan, currently staying at the local RV park. They were sightseeing at the marina and had wandered over to take a closer look at Scoots. After a pleasant conversation, they continued on their way and we continued with our breakfast.

I'd been toying with the idea of hiking the Cape Flattery Trail, which had been advertised in many places and sounded quite nice. Now, how to get there....the trailhead is about 6.5 miles from the marina. Some online research established that yes, there is a transit system in Neah Bay, but no, it doesn't run on weekends or holidays (today is Sunday, tomorrow is Veteran's Day). No taxis, either. Walking the whole way was right out, as I was up for a 2 mile hike, but not for a 15 mile hike.

I asked the weekend guy in the harbormaster's office if I could walk out the breakwater in the middle of the bay, to Waadah Island. "You could..." he said, "but you'd be jumping rock to rock." Hmm. I'd been hoping there'd be a path or road on top, and as I could occasionally see breakers crashing against the seaward side of the breakwater, I wasn't keen on rockhopping there.

"You could walk out to Koitlah Point," he suggested. "There's a gravel road." Koitlah Point was the furthest point I could see from the boat, across the bay. Far enough for a good walk, but not a trek.

Fifteen minutes later, I set out in my warm coat, with my binocs around my neck, a camera and a protein bar in my coat pockets, and my phone in my back pocket.

It was a good walk. My route took me along the southwestern edge of Neah Bay, where I decided to take the road to the breakwater, which followed the shore, instead of the slightly inland route to Koitlah Point. I got several good looks at the red ketch anchored in the bay; I couldn't make out a name on it, but I could see that it flew a French flag. I leaned way back to see the tops of towering spruces that grew on the fern-covered hillsides. I stood beside a creek that emerged from the ferns and rushed down the hill to join the ocean. 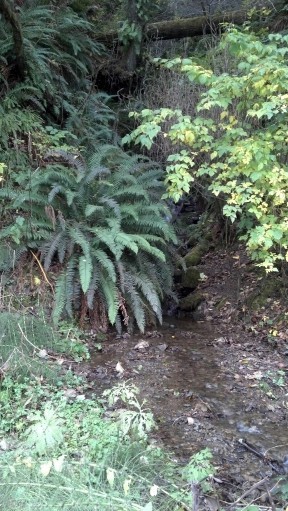 I walked along rocky, kelp-strewn beaches and peeked into tidepools. 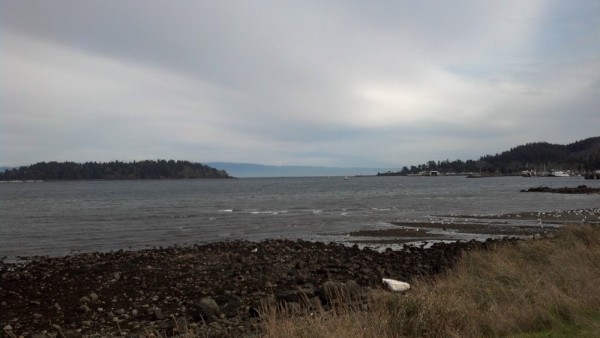 I also saw some disturbing refuse along the gravel road: assorted parts of what appeared to be at least one slaughtered calf. I didn't linger there.

I saw many different bird species: widgeons (American and European), hooded mergansers, buffleheads, crows, assorted gulls, a tiny winter wren, bald eagles, a song sparrow, cormorants, loons, geese....On my way back to town, I encountered a man who had parked his car beside the road. "Did you see the kingbird?" he asked.

"Do you mean a kingfisher?"

"No, a kingbird. They're rare in these parts, and there have been reports of one around here for the past few days."

"No," I said. "No kingbird, but lots of gulls. I can't tell the gulls apart very well."

"No one can," he said. "But look, there's an immature Icelandic gull, standing in that stream on the beach." Sure enough, there was a cream-colored gull standing among the brown and gray and white ones.

I thanked him for the sighting and told him that I would stand out in the street and wave my arms if I happened to see a kingbird on my way back to the marina. I didn't.

Back on the boat, Eric had been busy: he'd hooked up the wind pilot, sealed the hawspipe for the secondary anchor rode, secured the dinghy, took off the dorade cowls and replaced them with flat covers, and worked on the radio to eliminate the RF interference that had been intermittently plaguing it. 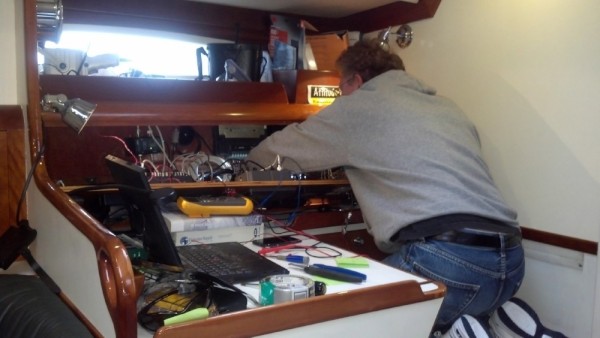 For the remainder of the day, we hung out inside Scoots, while the wind built into a steady roar through the rigging. Eric made Indian food, and we listened to the Sharks game over the Internet. They lost to Winnipeg in a shootout.