Half Moon Bay to Santa Cruz Ahhh, it's so nice to be at anchor! Swinging gently with the wind, rising and falling on the waves, surrounded by birds, sea lions, kayakers, and stand-up paddleboarders. 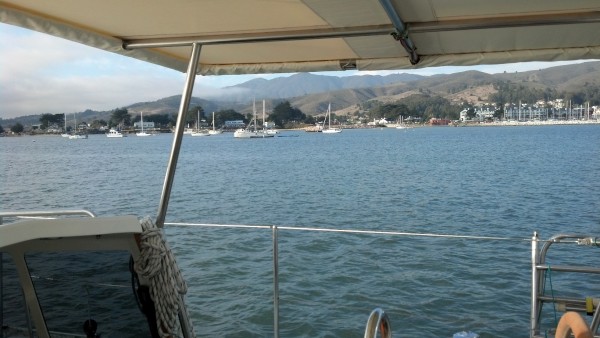 After running our generator for an hour to heat up the water and charge SCOOTS' batteries, Eric and I took showers on board SCOOTS for the first time in months. (Being in a marina, we used the shore facilities.) We had hot water, but the flow was restricted for some reason...another item for our endless fix-it list.

A little while later, our friend, Max, came by on his sailboat to say hello. He'd sailed from San Francisco the day before, in a race to Half Moon Bay, and was about to start back.

While Eric was troubleshooting the hot water flow issue, I went kayaking around the harbor. I checked out some derelict boats and watched some seals watching me. When I got back, Eric had figured out that the problem was a faulty valve. He swapped it out with a new one from our spares, and we now have as much hot water flow as we want.

In the afternoon, we dinghied into the main harbor, where our friend, Angie, picked us up and took us to her house in El Granada, just up the hill from the harbor, for drinks, snacks, dinner and conversation. Kelly joined us as well. It was a great time!

The next day we relaxed and did odd jobs aboard SCOOTS. At the end of the day, we loaded our dinghy back on deck in preparation for leaving for Sana Cruz the next morning.

We left Pillar Point Harbor at 7:30 am, just behind two other boats who had arrived the day after we did. Though we'd hoped to sail to Santa Cruz, we ended up motoring most of the way. Even so, it was a good day to be on the water. Not much wind, but the weather was sunny and warm. 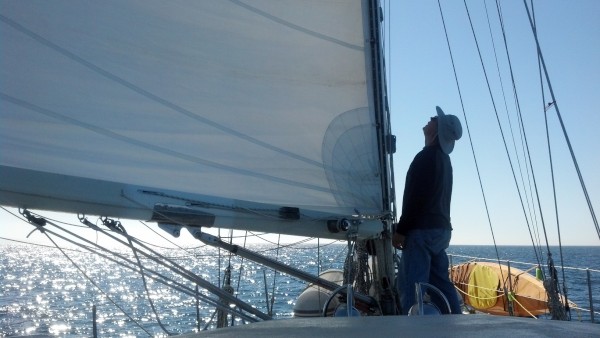 As we made our way south, we saw many of the beaches that we'd frequented over the years...San Gregorio, Pescadero, Pomponio, the Secret Beach...each with its own set of memories. The trip to Santa Cruz took us about 7 hours. Along the way, we saw a whale and some sunfish, a few sea lions, and lots of birds.

As we approached Santa Cruz, suddenly there was a lot going on! The wind picked up, kicking up choppy wind waves. Large swells marched incessantly shoreward, smashing into the harbor breakwater, or surging into the harbor entrance. Kayakers plied the water outside the harbor, disappearing--and then reappearing--in the swells. Other kayakers paddled lazily between the harbor entrance and the arrivals dock, where we were headed. I brought SCOOTS onto the dock faster than I'd intended, causing some excitement.

We checked in with the harbormaster and were assigned an end tie along the harbor channel. It was a nice spot, with a good view of the harbor entrance and a front row seat for watching the many sea lions hunting salmon in the channel. Kelly joined us soon after we arrived, for her last night aboard SCOOTS.

We spent much of the next day (Sept. 17), moving Kelly's belongings from SCOOTS and her small storage room, to her dorm room. Eric and I were so glad to have had Kelly living aboard with us for awhile, and to be able to bring SCOOTS to Santa Cruz, to deliver Kelly's belongings and help her get settled in her new home.

While Eric took a nap, I spent the afternoon sitting on SCOOTS' foredeck, enjoying the sunshine and watching the show as boats carefully timed their entries and exits to avoid the huge breakers and swells in the harbor entrance. Some boats disappeared completely in the trough of one swell, before reappearing a bit further out on the top of another swell. It looked dicey, to be doing that in a narrow entrance bounded by sharp, pointy rocks. The booming sounds of the big waves crashing against the breakwater reverberated throughout the harbor all day, and the surge produced from their remnants kept SCOOTS and the other boats rocking and rolling. I was glad we were tied up to a dock. 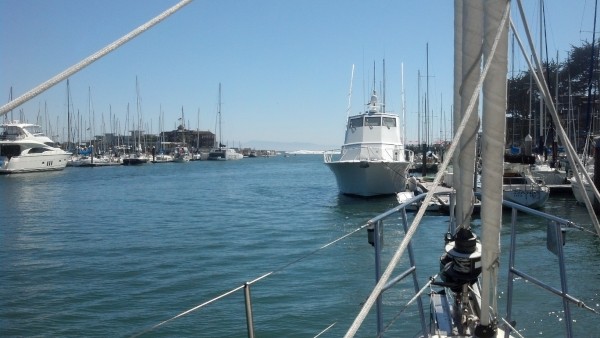 Check out the breakers in the harbor entrance!


Later, we collected our laundry bag--and our spiffy new, folding, rolling dolly--and walked up the hill to the laundromat. While our clothes were washing, we walked to the beach overlook and watched the breakers crashing on the shore, and the boats anchored just offshore dancing in the large swells. While our clothes were drying, we walked to a pub and had beer and appetizers.

Back on SCOOTS, we put our clean clothes away, and clean linens on the beds, then went up on deck to watch the parade of sailboats returning to their slips after the Wednesday night races. There were dozens of them, all shapes and sizes. They streamed in for most of an hour. Santa Cruz must have a very active yacht club. 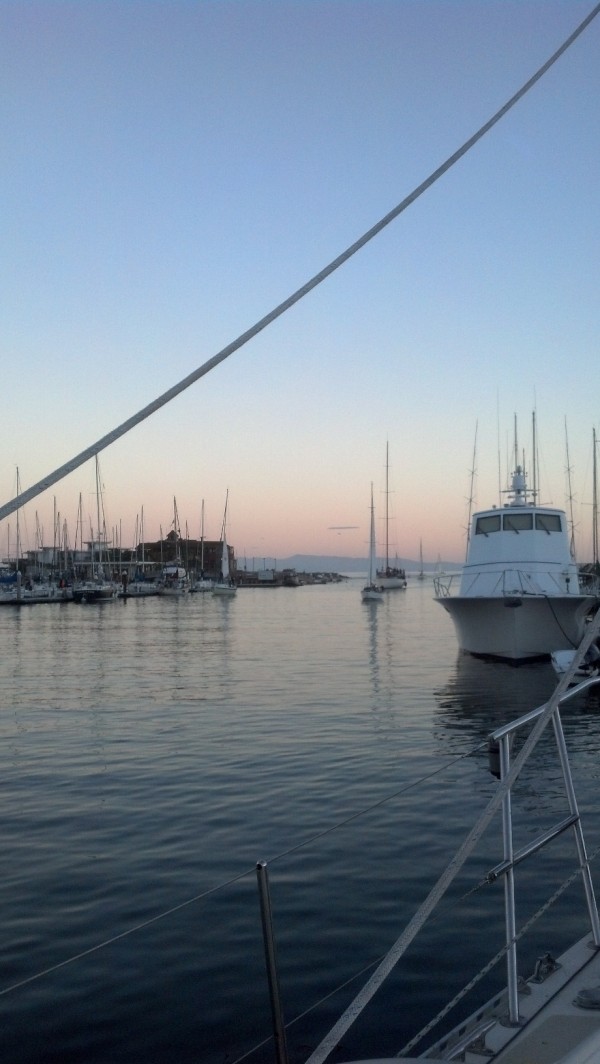 We woke to rain the next morning. Not a hard rain, but just enough to get everything good and wet. We knew that the seal around our saloon hatch still had a leak, even after we reapplied Sikaflex, so we'd covered the suspected gap with a piece of electrical tape before the rain got started. Still, the pot we'd placed on the saloon table under the hatch had collected a small puddle overnight. We're going to redo the hatch seal--again--once we procure some more Sikaflex 295. It's not as easy as you might expect...Most of the usual marine stores don't carry it, so we're looking to buy it from Amazon and have it shipped to one of our next ports. Somehow. We're still figuring that out...and hoping for more sunny weather in the meantime.

Large swells were still rolling and smashing against the breakwater, so we decided to stay put in Santa Cruz for another day. 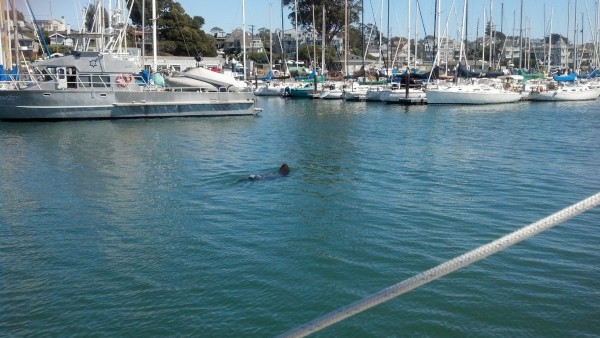 We did more odd jobs aboard SCOOTS: Eric debugged the WiFi booster, which had stopped boosting, and I spent some time stowing some items that had not yet found homes on board. When the weather cleared, we went out for a walk which turned into a 4-mile-round trip excursion to an electronics store in search of the items that Eric had determined would help him fix the WiFi booster. We were partially successful in our quest, but it was definitely a good walk.