On Sept. 19, the weather was sunny and warm, the swells had laid down a bit, and we were ready to head out from Santa Cruz. Even outside the harbor, the wind was light, but we put up some sails and had a good but short run down the coast to Capitola.

We'd decided to anchor off of Capitola, instead of heading directly for Monterey, on the recommendation of some boaters in Santa Cruz, who'd enjoyed their stay there a few days earlier. We dropped the anchor out from the Capitola Wharf in 21 feet of water. We also thought that it would be good to anchor off of a beach, and get used to the sound of the surf, as we'd have quite a few of those kinds of anchorages in Mexico. 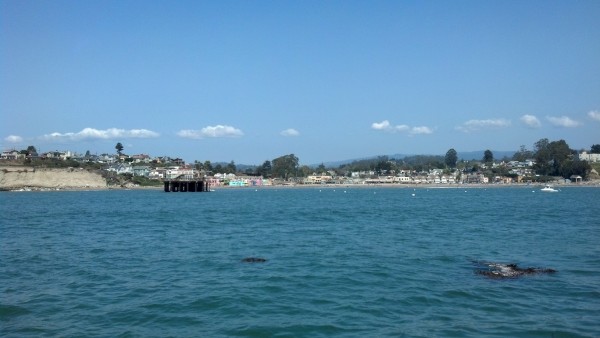 A harbor seal poked its snout out of the water behind SCOOTS, tipping its head way back and rotating in a circle. Why do they do that? We could hear it taking breaths, before dipping back under the water. A sea otter was hanging out in a nearby patch of kelp, floating on its back and we could hear it crunching on a crab that was on its chest. Gulls, terns, pelicans and cormorants rounded out the local wildlife. 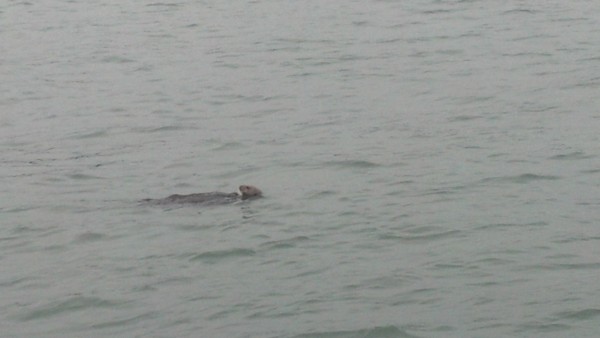 Even though the swells had diminished from the previous days, they were still active enough to roll SCOOTS incessantly back and forth; every so often, one of the bigger ones moved the dishes in the cupboards. A walk from one end of the cabin to the other was a crazy zigzag. Our view out the saloon window was a succession of sky--horizon--ocean--horizon--sky... repeated ad nauseum. It's a good thing that Eric and I aren't particularly susceptible to the "nauseum."

We managed not to roll out of our bunk that night, though neither of us slept particularly well. We laughed a lot.

Beginning at 6 am the next morning, a procession of little red rental boats buzzed past SCOOTS on their way out for a day of fishing. Later, stand-up paddleboarders and kayakers floated by, checking out the goings-on in the kelp patches, or just getting some exercise.

Since neither of us had been to Capitola before, we decided to go ashore and explore the town. We called Capitola Boat and Bait and arranged a ride to shore in their "water taxi." Two minutes later, a dinghy pulled up to our swim step, and off we went.

Capitola Beach is a quintessential California beach town, with a wharf, beach houses, volleyball nets, shops and cafes, and even a quaint, multi-colored hotel. We had lunch in a little Thai restaurant, then walked to a grocery store and produce stand to top off our provisions. We took another "water taxi" ride back to SCOOTS, and spent the rest of the afternoon in our cockpit enjoying the music of the blues band that was playing in the restaurant on the wharf, and watching the local wildlife going about their business. The next morning was sunny and nice. Paddleboarders and kayakers were in abundance, and the little red boats were scattered on the water in a seemingly random pattern. This morning, I was amazed to see hundreds of cormorants fly past SCOOTS in the anchorage, on their way to someplace where the fishing was good. I didn't know that they hung out in flocks, and I didn't know that they all flew en masse when they went somewhere. Every day I learn at least one new thing...today I started early.

When we started getting SCOOTS ready to depart for Monterey, we found the remains of what was probably a crab (there wasn't much left for identification) on the upturned hull of our dinghy. Our best guess is that a seagull dropped it from a height to break it (ow!), and then ate it right there on our dinghy. Since neither of us heard anything that sounded like a crab hitting our dinghy, we figure it happened while we were ashore yesterday.

We left the anchorage at noon, headed south toward Monterey. The sun was warm, the wind had come up, and there were humpback whales EVERYWHERE. We could see spouts in the distance in front of us, behind us, and off to both sides. Once, when I came up into the cockpit from the cabin, I saw some round slicks of flat water just behind SCOOTS to port. I had just finished saying, "Hey those look like the round slicks that whales make when they've just gone been at the surface..." when a whale surfaced right behind us, on the other side of the boat. It had dived on one side of SCOOTS and come up on the other! Wow!

Another time, we saw a humpback (about a mile away) repeatedly sticking its tail way up above the water, then smacking it down hard--WHACK! It did this at least two dozen times. I checked the Internet later, to see why humpbacks do this and discovered that there are many theories (scaring the fish, aggression, etc.) but no one seems to know for sure why they do this. Too bad we can't ask the whales; they know. Anyway, we made sure to stay far away and we kept a sharp lookout when the whale finally dove, in case it came up near us. (It didn't.)

We held a small ceremony during our trip across the bay: When we sailed over Monterey Canyon, which is thousands of feet deep, we dropped our one remaining key from the house that we recently sold, into the abyss. It marked another form of closure for us. 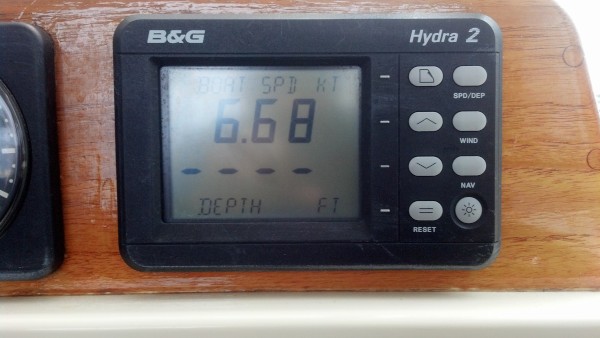 Our depth gauge goes off soundings, indicating a depth of more than 700 feet... 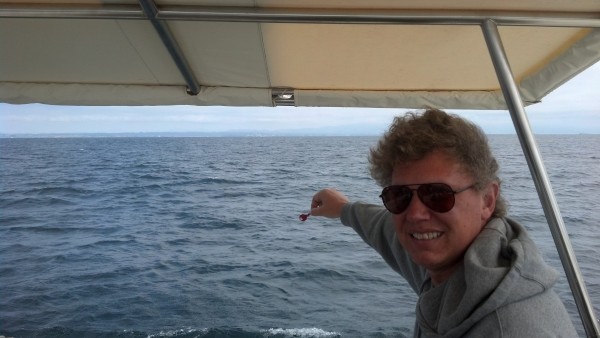 The anchorage at Monterey, just outside the harbor entrance, is sheltered and roomy. We dropped our anchor and spent the rest of the afternoon and evening floating gently in the light breeze and listening to the sea lion symphony from the harbor breakwater. Sea otters, dolphins, sea lions, seals, and many birds are sharing the anchorage with us.

Oh, and bazillions of salps, too. It's like salp soup here. Salps are small, clear, gelatinous filter feeders that look like tiny jellyfish. They will often join together in a goopy conga line. I first learned about salps in my invertebrate zoology class in college. I remember my professor's description of salps as "bags of snot that float around filter feeding." Not very charitable, but certainly accurate. At night, the mother and baby sea otters call to each other in the dark. The babies sound like frantic kittens, and the mothers whistle at them. It's comforting to hear their voices converge and then get quiet.

I'll include more about our stay in Monterey in my next post. 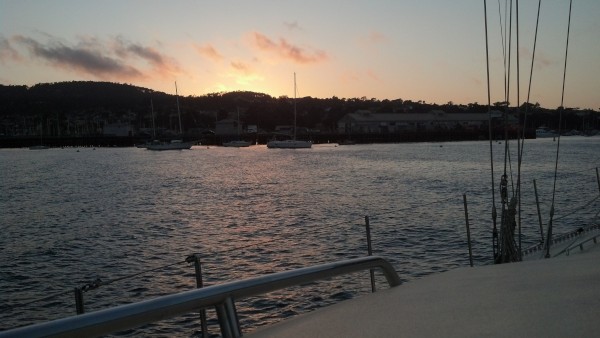