Sept. 23. This morning, we put the dinghy in the water and buzzed over to the harbor to scope out the marina and find the dinghy dock. We tied up the dinghy and had a nice walk along the waterfront to a marine supply store, where we ordered some Sikaflex 295 sealant to fix our leaky hatch. We had lunch at a nearby deli on the dock, then dinghied back to SCOOTS.

Eric spent the afternoon making Dyneema soft shackles and splicing a new anchor snubber; I loaded our new ditch bag with our survival gear and practiced tying knots. How very nautical of us! 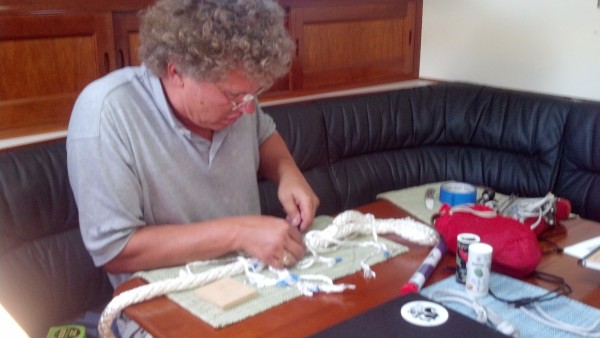 Eric working on the splice. 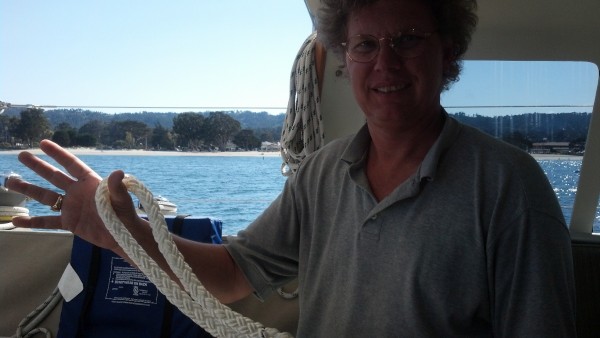 The wind came up in the late afternoon, and the wind-waves followed: 3-4 footers, about 3 seconds apart, on the beam of course. It was really rolly! I was sitting on the settee with my feet up, and I kept getting rolled toward the floor. I eventually had to put one foot down on the floor to keep upright. SCOOTS was still rolling when we climbed into our bunk for the night.

The next morning, the sun cast long shimmering golden streamers across the water, which was all placid and innocent, as if it had never been rowdy at all the day before! We were treated to a massive fish-feed, as hundreds of birds of all kinds dove and swam and splashed and plummeted in the water near SCOOTS. 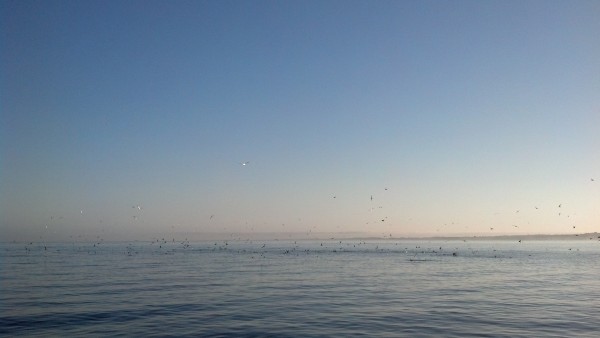 After we picked up the Sikaflex, Eric dropped me off at the beach in the dinghy. I spent the next couple of hours walking along the beach and sitting under the cypress trees. 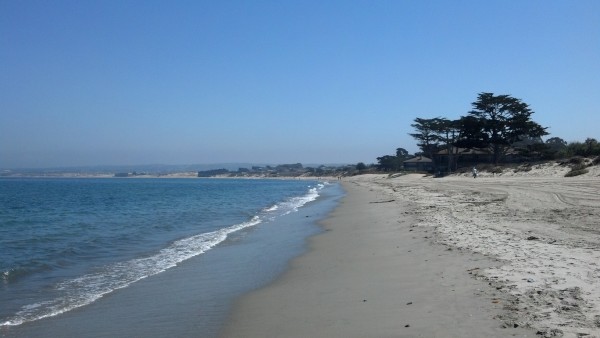 It was really nice. I found a heart-shaped stone, and when Eric picked me up, he brought a plastic bag that I used to collect some beach sand, the first of my collection from beaches that we'll visit. When I got back to SCOOTS, I washed the salt and sand off my clothes with the fresh water shower on the swim step, then changed into dry clothes and sat in the cockpit, looking out at the bright water. The thought came to me, "I can have it all." I can live afloat on a wonderful boat, and visit all sorts of interesting places, and, when I need to spend some time with trees, or feel the earth beneath my feet, I can go ashore. 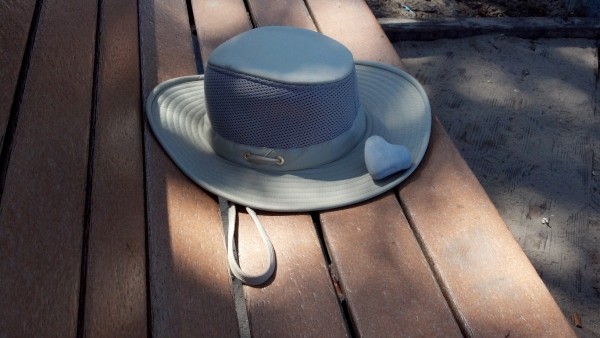 Sept. 24. Sikaflex Day! Today's the day we're going to redo our main saloon hatch. It's also the first day with a chance of rain in awhile. Coincidence?

After the fog burned off and the sun came out, we collected our hatch sealing gear: a roll of paper towels, a spray bottle of ethanol, bamboo skewers, blue painter's tape, a spackle scraper, razor blades, silicone remover spray, a green scrubby pad, and the guest of honor, a new tube of Sikaflex 295 sealant.
We spent most of the morning removing old Sikaflex and applying new Sikaflex. Hopefully, this time it'll keep all the water out. 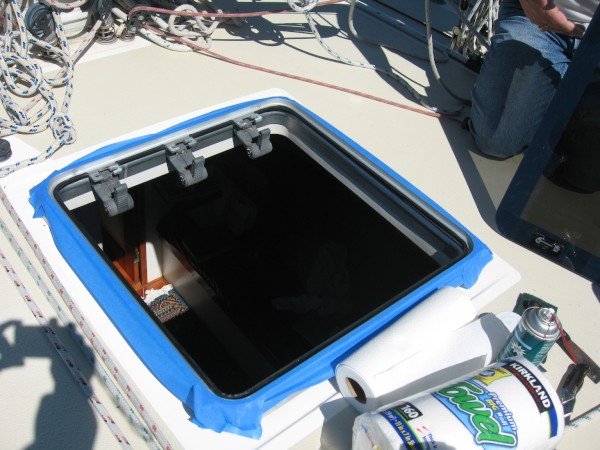 Getting the hatch ready. 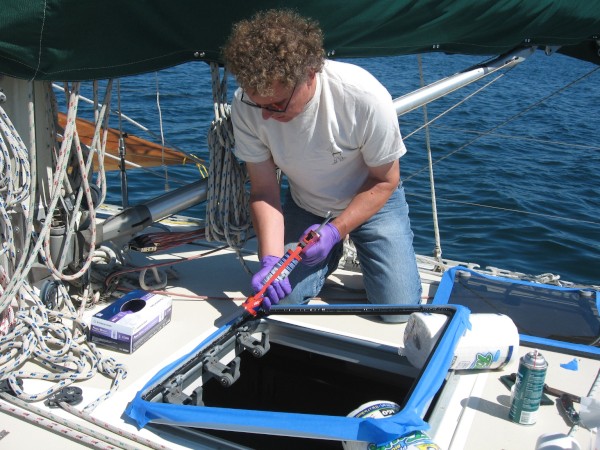 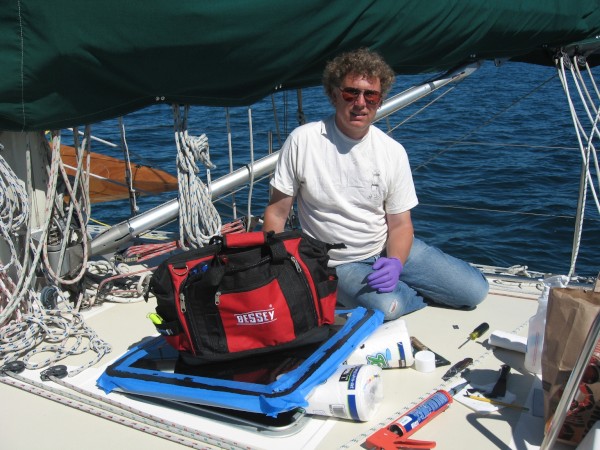 Weighing it down with our heavy toolbag.

After a late lunch, we practiced Spanish in the cockpit with my Duolingo app. It was muy bueno.

Later, we remembered that we'd intended to practice beach landings in our dinghy today, to get some practice for the sporty ones we know we'll have to do in Mexico. The beach here is pretty mellow, but still has some surf, so it was a good place to practice. We put the wheels on the dinghy and headed in. When we got near the beach, we put the wheels on and rode in on a swell.

The wheels worked great; we rolled right up onto the beach. Then we pushed the dinghy back into the surf and headed back to SCOOTS. It was a wet job, and the water, while warmer than our ocean water often is, was still chilly. We'll get some more chances to practice on the way. I'm a bit apprehensive about the beach landings I hear about in Mexico. But at least the water will be warm.
After we rinsed off and changed clothes, we noticed that a beer can race was forming up just outside the anchorage. So we got some drinks, and sat in our cockpit munching mixed nuts (the Brazil nuts all went over the side), watching the sailboat race as the sun lowered in the sky. 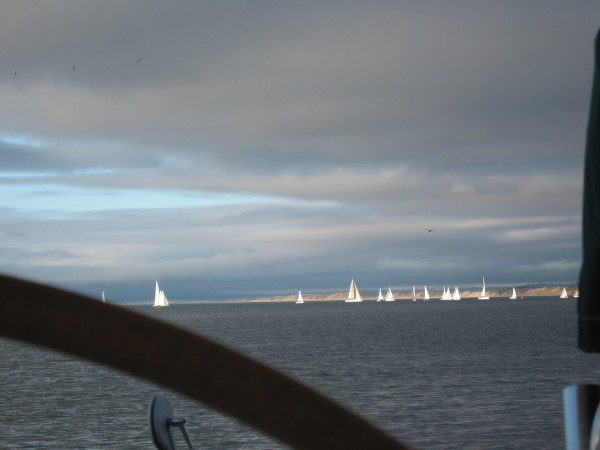 Sept. 25. Today's the day we take SCOOTS into the marina for safekeeping while we make our trip inland. We woke up to gray, drippy skies. I confess that I felt a bit gray and grumpy at the prospect of loading the dinghy onto SCOOTS and packing up in the rain. But by the time we'd finished breakfast, the sky had cleared and the sun had come out! We loaded the dinghy onto SCOOTS' foredeck, readied the fenders and docklines, called the harbormaster to request a guest slip in the marina, and headed over.

This being my first docking since the exciting one at Santa Cruz, I was anxious to do it right and to have it over with. I brought SCOOTS into the marina nice and slow, and tucked her right into the slip. Confidence restored! Eric tied SCOOTS into her slip and just like that, we were ready to embark on our next adventure, which was...renting a car and driving inland to the CalStar star party for the weekend!