After getting SCOOTS all set in her slip in Monterey Marina, we collected the camping gear we'd brought on aboard for this occasion--tent, poles, sleeping bags, inflatable mattress--and called the local rental car place for a car. They had no cars available! We called around and found a car in Seaside (about 15 minutes away by car...remember, we have no car) that would be available later in the afternoon. This would make our arrival at the CalStar star party before dark somewhat iffy, but it was the best we could do.

In a few hours, we went up on the wharf and Eric summoned an Uber driver, who showed up in a few minutes, took us to the rental car place, and told us where we could go to shop for camp groceries. We picked up our car (a sporty black 2014 Dodge Charger) headed back to the marina to load up, bought some groceries, and headed south.

We didn't make it to the Lake San Antonio Park campground before dark. Almost, but not quite. And it matters, because the people who are already there, with their telescopes set up, are allowing their eyes to get dark-adapted, a process that is disrupted by any amount of white light. Such as...car headlights, dome lights, backup lights, dashboard lights, trunk lights, door lights, regular flashlights...you get the picture. When we stopped at the park entrance area, a few miles from the campground, Eric found the car's fuse box and started pulling fuses to inactivate all the above-mentioned lights (except the headlights, which we figured we could manage manually), so that when we slunk--(hopefully) politely unilluminated--into the already-dark campground, we wouldn't blind anyone with any spare photons.

Now, at this star party are two viewing areas, one for more "serious" observers, who will be really annoyed if you cast any stray light in their direction, and one for more "casual" observers, who will be slightly less annoyed by said stray light. Since we were arriving after dark, we opted to camp in the "casual" area, but since Eric usually camps in the more "serious" area, he wasn't exactly sure where the dirt road leading to the "casual" area joined the main road. This was a bit of a problem, because we had to drive with the headlights off. In a location that is chosen for the star party because it is really dark. And is held during a new moon. So anyway, it was really, really dark.

When we came to the dirt road that Eric thought was the right one (not exactly, it turned out, but close enough), we turned off the main road. I was driving and I couldn't see ANYTHING. So Eric got out and walked down the road a few feet in front of me, shining his red flashlight (red light is okay) at the road to guide me. Brave man.

We made it to the edge of the "casual" area with only one brief headlight faux pas (damned rental car), pulled off the road, and declared that spot to be our camp site. We unloaded our gear--in the dark--and set up our tent (with color-coded gray and black poles, NOT particularly useful in the pitch black)-in the dark--inflated our mattress--in the dark--put our sleeping bags and clothes in the tent--in the dark--and then headed out across the dark campground to find our friends in the "serious" area--in the dark.

When we approached the area of the campground where our friends usually set up, we started hearing familiar voices in the dark. One by one, we found and greeted our friends. Most of them knew that we had moved onto SCOOTS and had left the Bay Area, but only a few knew that we were coming to the star party, and it was fun to surprise them. We hung out for a few hours (Eric lasted much longer than I did), chatting and looking at all sorts of cool astronomical objects.

We had such a good time at CalStar! The people we hang out with are friendly, knowledgeable, interesting, and lots of fun. 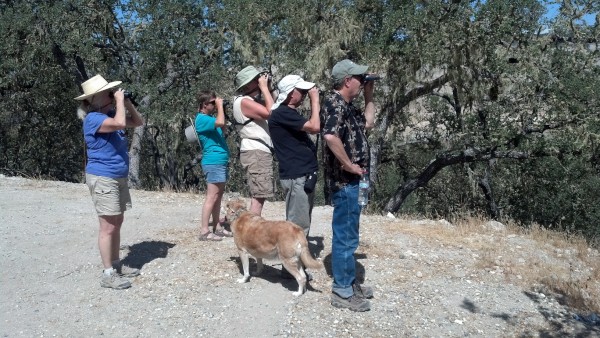 One day, we went on a hike, to do some birdwatching and try to find the tiny bit of water that was rumored to still be in Lake San Antonio (which now was, as far as we could tell, a grassy valley). Two years ago, for instance, the lake was packed with boaters and water skiers and wakeboarders and swimmers, and we spent an afternoon lazing around on our floating air mattresses. Not any more. 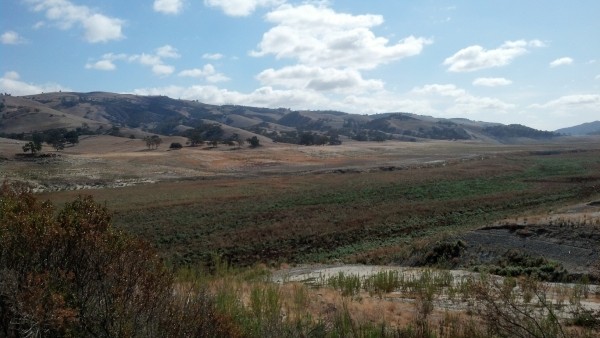 The grassy valley that was Lake San Antonio.

The highlight of that hike--for me--was seeing a tarantula hawk wasp! These insects are about two inches long, with a glossy black body and bright orange wings. They also sport a stinger 1/3 of an inch long, which the females use to paralyze tarantulas. Do they then eat the tarantula? No. They drag the incapacitated arachnid back into their nest hole, where they lay eggs in it. When the eggs hatch, the larvae eat the tarantula innards, pupate, and then eventually make their way out of the nest hole. Pretty gruesome. 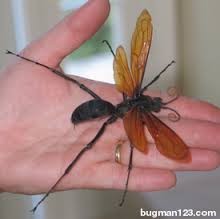 Oh, and we did find a little bit of water (apparently 4% of the lake's capacity) lurking at one end of the lake near the dam. On which floated some white pelicans.

Back at camp, we looked up the tarantula hawk wasp online and found--courtesy of the Schmidt Sting Pain Index--that these bugs inflict "the second most painful sting" of any insect, which feels, according to Schmidt, like the sensation of "having a running hair dryer thrown into your bubble bath." Ouch. We were glad to have given this wasp a wide berth! But of course then we had to find out what insect holds the record for most painful sting: that would be the Bullet Ant, whose sting was likened to "fire-walking over flaming charcoal with a 3-inch rusty nail grinding into your heel." Ouch squared.

During the weekend,we also saw a partially leucistic (white but not albino) scrub jay, who was participating in a raid of an acorn woodpecker granary in a nearby oak tree. No pigs put in an appearance this year, but there were lots of deer, who were enjoying eating the acorns that were in abundance, and I saw a great horned owl.

It was funny for Eric and me to be on solid ground, after spending a couple of weeks on SCOOTS. For the first couple of days in camp, we had a hard time standing on one leg to put on shoes or take off pants, tending to list and then fall to one side, and our bed felt as though it were rocking gently. After a few days, though, we had our land legs back, and now I suppose we'll have to get our sea legs back again when we return to SCOOTS.

We decided to visit Hearst Castle on Sunday. To be honest, I wanted to drive there if we were going to visit, rather than attempt to dinghy in when we anchor in San Simeon Bay later this week, since we had read that this dinghy landing is wet at best, catastrophic at worst. 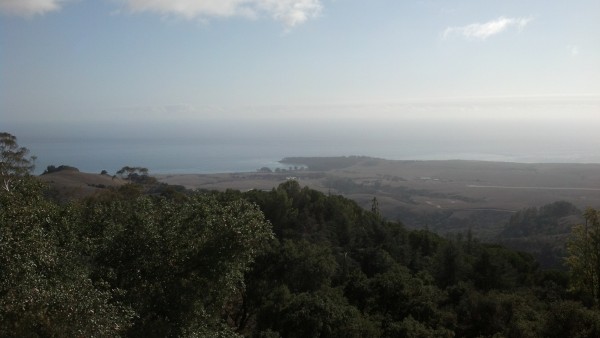 We had a nice drive through the grassy hills of Central California, had lunch in Paso Robles, then drove north along the coast, reaching Hearst Castle in mid-afternoon in time for our tour.

The tour was fascinating. The castle was over-the-top opulent, a perfect representation of 1920's extravagance. I was surprised to learn, though, that William Randolph Hearst had grown up loving the land on which the castle was built, having spent many days camping and exploring there as a boy. I was further surprised to learn that when oak trees stood in the way of construction, he had them relocated to more suitable spots, transported in giant cement boxes on wagons, rather than cut them down.

Art aficionados (I am admittedly not one) will appreciate all the original works of art on display in the Castle: centuries-old tapestries, hearths, ceilings, statues, and other pieces valued at many millions of dollars. 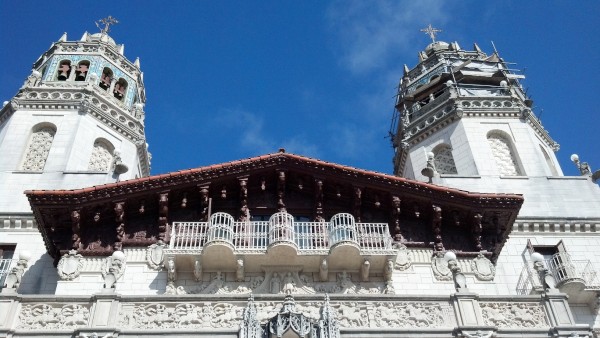 My dad and his ladyfriend, Angie, were also visiting Hearst Castle that afternoon. We met up with them after our tours concluded, and arranged to meet back in Monterey later on for dinner. Which we did, after a drive up Highway 1, during which we enjoyed stunning ocean views and evaluated coves for their potential use as anchorages. Our conclusion: there aren't any between Stillwater Cove, near Carmel, and San Simeon. Too many nasty, pointy rocks!

We enjoyed tapas and wine with my dad and Angie at the restaurant at their hotel, then headed back to SCOOTS--and our sea lion neighbors--closing out a truly enjoyable weekend road trip.

PS. If you'd like to learn more about the Schmidt Sting Pain Index (and who wouldn't, here is a link to a good article with pictures of the top ten finalists:
http://www.dailymail.co.uk/sciencetech/article-2148089/The-10-painful-stings-planet-self-sacrificing-man-tried-150-different-varieties-science.html