Back in the marina, we readjusted to life afloat and spent the day taking care of chores--picking up packages from the harbormaster's office, doing laundry, buying groceries, returning the rental car, tidying up our living space...

I saw an interesting creature in the marina today: it was about six inches long, completely transparent, shaped like a potato, with a large gaping opening at one end and a tube-like opening at the other, and a golfball-sized orange organ of some kind near the tubular end. This clear potato-creature seemed to suck in water with the large orifice, and propel itself by pushing it out the tubular one. A query on Google solved the mystery: this is yet another species of salp, much larger than the ones we'd seen in the water of the anchorage.

Another creature I only heard, and never saw...Anytime we're aboard SCOOTS in the marina, we hear "snapping" noises, like popcorn popping, coming from outside the hull. Another trip to Google later, I learned that these sounds are probably being made by the littoral pistol shrimp (Synalpheus lockingtoni). This 2-inch-long shrimp makes a snapping sound by closing its big claw quickly enough to cause cavitation. They close their claw so fast that it creates a jet of water moving at almost 70 miles per hour! This jet causes a sharp and brief drop in pressure, resulting in the formation of a bubble. When the pressure returns to normal, the bubble pops, making the snapping sound. The shrimps use the shock wave produced by the bubble popping to stun their prey. These shrimps are the only known creature to create cavitation. 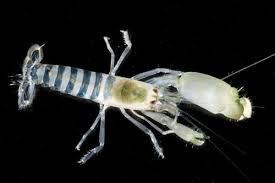 We left Monterey today, put the sails up, glided around Pt. Pinos (keeping well clear of the breakers on the rocks!), arriving a few hours later at Stillwater Cove, a little nook in the land under the gaze of Pebble Beach Country Club. Yeah, that Pebble Beach.

Our research had indicated that the cove had a lot of kelp in it, and it was advisable to check in with the cove's yacht club on arrival, to find the best route through the kelp and the best spots to anchor. So we did that. Following this advice, we found the clear lane through the kelp and dropped our anchor in 35 feet of water between the orange marker ball, the big powerboat on the last mooring ball, and the big rock.

Gin and tonics seemed in order, as we sat in SCOOTS' cockpit enjoying the beautiful scenery: open ocean, rocks and seabirds to the west; cliffs topped with brilliant green grass and sand traps ringing the cove to the east. Nattily-attired golfers and their caddies walked the fairways, following the trajectories of their golf balls. 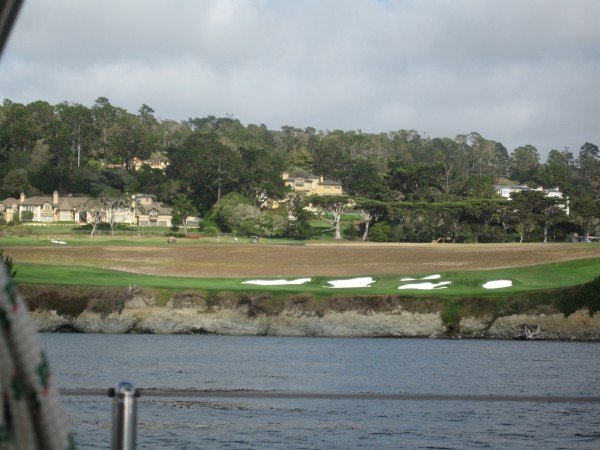 The water was hardly "still" in the cove that night, rolling us back and forth on swells that sneaked around the big rock and spread into the bay. This seems to be the norm for us lately, unless we're tied up in a marina. Oh well, we're certainly getting our sea legs!

That big boat anchored on the last mooring ball was lit up like a pimp mobile all night: bright blue spot lights on the upper deck, and a changing multi-colored light show under the transom. It just lacked a disco ball, but maybe there was one inside. I won't share its name, to protect the guilty party, but there were three S's in its name, and they were all written as $'s. Quite something. To each his own, I guess.

We spent all day at the cove, kayaking in and around the kelp, watching wildlife (otters, seals, sea lions and lots of birds). It was like hiking through the canopy of a forest, where the roots were anchored thirty feet below. 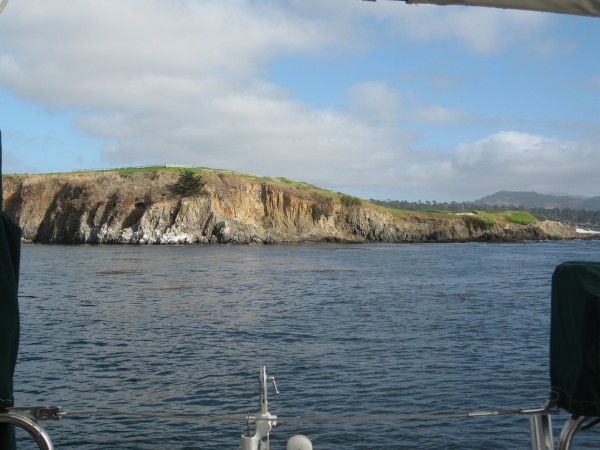 We also attended to some boat projects while on anchor. We tested the Sikaflex seal that we'd applied in Monterey a week earlier, dumping a gallon of water directly onto the seal and watching inside the cabin ...No leaks! Yay!

And, now that we're in clean water, Eric was able to test the watermaker that he'd rebuilt. It works! After we flushed the system, we tested the water for salinity and taste. It wasn't salty, and it tasted great! Soon we'll be ready to add fresh water to our tanks!

Today was a traveling day. We got up at 6 am, made coffee, and were underway by 6:30, when there was just enough light to see the orange marker ball that we needed to go around. We'd amassed a giant ball of kelp on our anchor, whose removal necessitated Eric hanging over the bowsprit anchor rollers, hacking at the kelp with a long fish knife. As we were pounding through some swells, of course.

It was rowdy enough, at the start of our voyage, that we both opted to don harnesses and (me) a life jacket. Within an hour, though, the wind petered out, and we ended up motoring nine of the eleven hours of our trip. I'm glad we have such a reliable engine!

Along the way, we saw quite a few whales, pinnipeds, salps, jellyfish, sunfish and birds. The water was the color that was called "green blue" in the Crayola 64-color crayon box, a beautiful slightly-green shade of blue. Not "blue green"- that's a different color.

We each took a hot shower along the way, as we passed the lighthouse at Pt. Piedras Blancas, and dried off in our warm, sunny cockpit. There are definitely benefits to sailing with no one else around.

Late in the afternoon, we dropped anchor in San Simeon Bay, a beautiful little hooked cove with a sandy bottom and light green water. 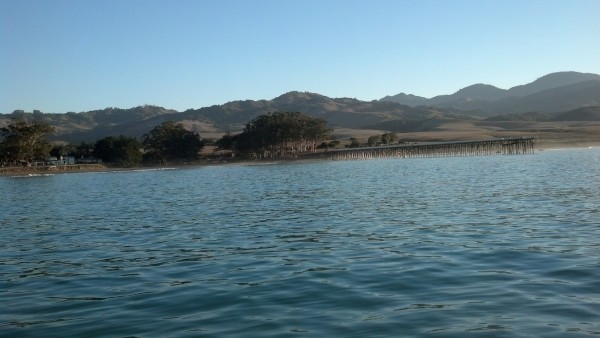 Hearst Castle perched regally, high atop a hill. It was fun to be here, to see the area from "the other side," after visiting on land a few days earlier. 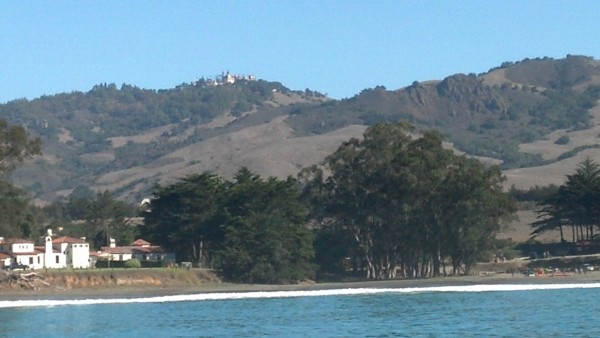 As we were making dinner, another boat motored into the bay. It was the pimp boat, from Stillwater Cove! Wouldn't you know it! He anchored farther away from us this time, so we weren't as dazzled by his lights. We were also exhausted after our full travel day and went to bed at 8:45 pm.