Momentous Event #1: It's my sister, Tara's, birthday! Happy Birthday, Tara! The return address on the birthday card we mailed from Monterey was "Vandy and Eric, The Pacific Ocean, 50179." 50179 is the number on SCOOTS' mainsail. Eric and I like to joke that it's our new zip code.

Momentous Event #2: We added the first watermaker-produced water to our water tanks! The first of what I hope will be many, many gallons.

Momentous Event #3: We put up SCOOTS' spinnaker! The wind was almost calm, from the starboard quarter, and we were a few miles offshore with lots of time on our hands, so we thought, "Why not?" So we dug out the spinnaker out of the garage, took it out of its bag, rigged it up, and voila! It opened right up the first time. Not one sailor word was uttered in the process. 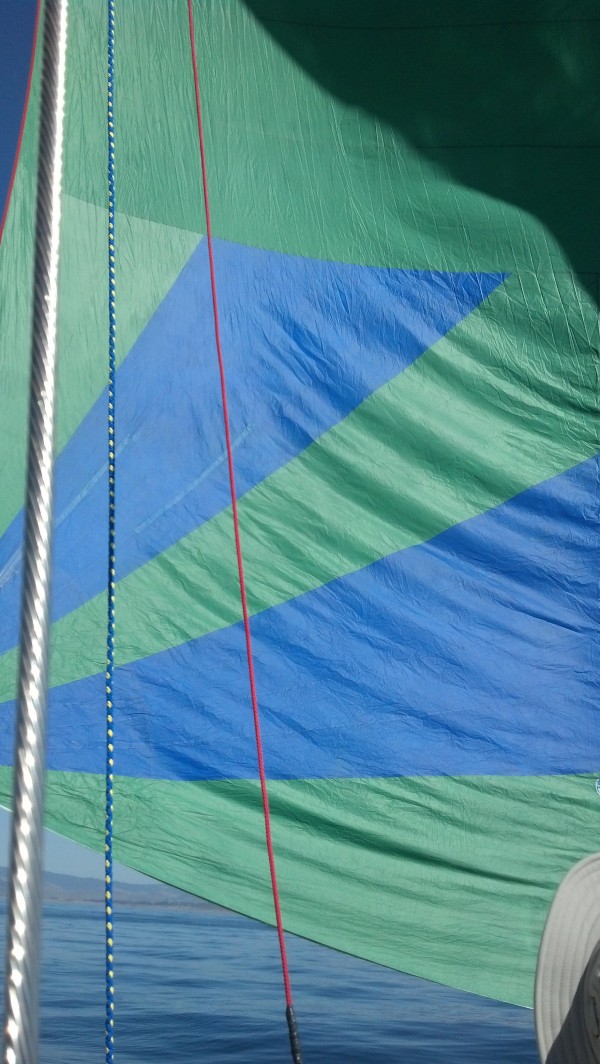 The spinnaker has a pretty blue and green pattern. We had no idea what it would look like, until we put it up, since it came with the boat and has been in its bag the whole time. We kept it up for a little while, but since there really was no wind, we pulled down the spinnaker sock and it doused the first time! Again, no sailor words were necessary. It was a good first spinnaker experience aboard SCOOTS.

We were able to sail a little while later, though, and we cruised down the coast past Diablo Canyon nuclear power plant and Morro Bay, which we had decided to bypass in favor of the further-south San Luis Bay, where we arrived just before sunset. We anchored between the Cal Poly and Avila piers, off the beach, as suggested by a woman we'd met this morning in San Simeon Bay, who paddled by SCOOTS on her paddleboard and stayed to chat for awhile.

Oct. 4. The next morning, we dinghied over to the sailboat, Tatau, to say hello to her crew. We'd seen Tatau in two other anchorages so far on this trip, but she was always gone before we had a chance to say hello. Today we got there in time!

Tatau's crew, Sara and James, are a friendly young couple from Canada, who are sailing around the world. They started their journey about a month before we did. They had been in Avila Beach for a few days already, and had been active in the local surfing community, taking surfing lessons and helping out with an upcoming surfing event.

They were a wealth of information, explaining how the dinghy tie-up at the pier works (tie one end of your dinghy rope to a float, and the other to a 20-foot high metal ladder that scales the side of the pier, then climb up the ladder), and they knew where all sorts of places were around town. They were going to shore, so we all dinghied over together and walked into Avila Beach. Later, we took the free trolley to Pismo Beach, where we had Mexican food at a great little restaurant near the pier that their surfing friends had told them about. It was yummy!

Oct. 5. We decided to stay one more day in Avila Beach, before continuing south. The wind has been uncharacteristically mild, and is forecast to stay that way for another couple of days, before ramping up again. We want it to be mellow when we round Pt. Conception, which we expect to be about two days from Avila Beach.

Mid-morning, we called over to Tatau to let James and Sara know that we had decided to stay for the day, and we arranged to meet them on shore for the local Apple Festival. They were very much looking forward to getting some fresh, local apple pie. Well, the Apple Festival was surprisingly disappointing, for someone looking for fresh, local apple pie. There wasn't any! There were some small pies for sale, but they were from Walmart. We did find a delightful confection for sale at a little food booth--deep-fried apple cheesecake--which all of us enjoyed immensely. 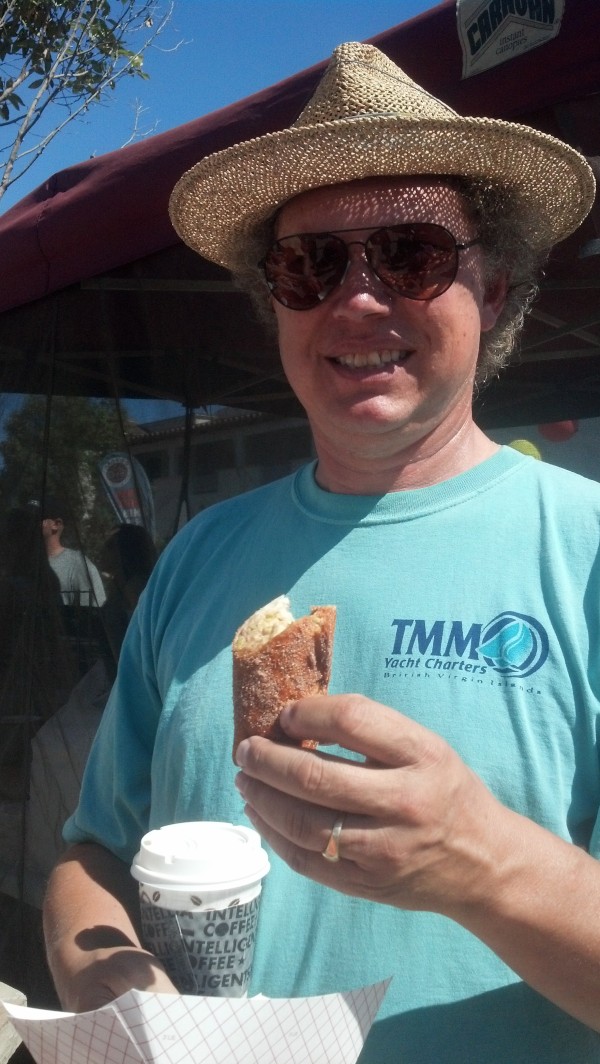 We hopped aboard the free trolley, with the intention of taking it to the grocery store that we had seen the day before. After we were aboard, the driver asked us where we were going and told us that we were on the wrong trolley; we needed the other trolley. Wait, there's more than one free trolley? Who knew? So she dropped us off at the hot springs, where she said the "correct" trolley would pick us up in a few minutes. While we were waiting, we met a family who had been waiting there for over an hour to get the trolley to the grocery store, as the "correct" trolley had passed them by an hour earlier. When the "correct" trolley passed us by a few minutes later without stopping, the mom called the dispatch office to complain. They sent over an 8-passenger van to take us all to the grocery store in air-conditioned style. That's service!

After shopping, we got back on the "correct" trolley and headed back to the beach, where we had fun lowering our grocery bags on a rope from the pier down the twenty-foot ladder to Eric, who received them in our pitching dinghy, and then shuttled the groceries and Sara back to our boats. 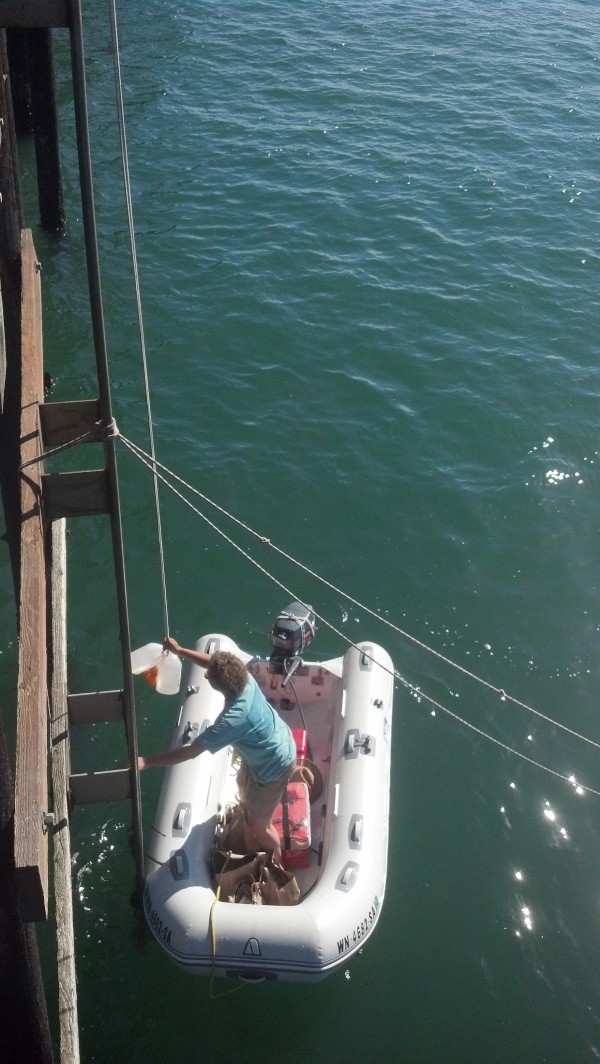 Eric and Sara wanted to going surfing, so while she paddled two boards to the beach from Tatau, Eric, James and I sat on the beach and James imparted his--admittedly limited--five days' worth of surfing knowledge to Eric, even whipping out his laptop to show Eric a surfing training video. After that, the four of us just sat on the beach watching the waning sunlight as we waited for the tide to come in. It was really nice!

Eric and Sara eventually went surfing, and James and I hung out on the beach, talking and watching our partners enjoying (and also getting pounded by) the waves. Eric managed to ride a couple of waves, and he had a great time, though he also said that all of his facial orifices had been completely flushed out with salt water in the process.