Oct. 6, 2014.
Pt. Conception has a reputation for creating nasty sailing conditions, hence its nickname, "the Cape Horn of California." To avoid these conditions, some boaters time their Pt. Conception passages for the middle of the night, when the conditions are most likely to be calm. We wanted to go in the daytime, which meant that we'd have to go when the weather was mellow. We'd been keeping an eye and and ear on the weather for a few days, to time our rounding of this particular piece of geography with the mellow weather that had been gracing the coast. The light winds and calm seas were forecast to end within a few days; it was time for us to make our move.

Heavy fog blanketed San Luis Bay on the day that we planned to leave. We could afford to wait for it to clear off, though, as our destination was Point Sal, a rocky headland only about 15 miles south. When the fog rolled back from the bay at about 2 pm, we headed out. The fog lingered on the ocean, so we fired up our radar for backup, but the rest of the fog eventually receded and we had pretty good visibility for our sail down to Pt. Sal.

Pt. Sal is a rugged, craggy headland, with crashing breakers and nasty-looking rocks, and nothing to recommend it except for being a convenient location to spend the night before rounding Pt. Conception. On a sunny day, it might have seemed like a nice place; under the thick, gray overcast skies we had, it seemed downright gloomy and foreboding. If there had been another suitable anchorage that we could have reached before dark, we probably would have gone there instead. 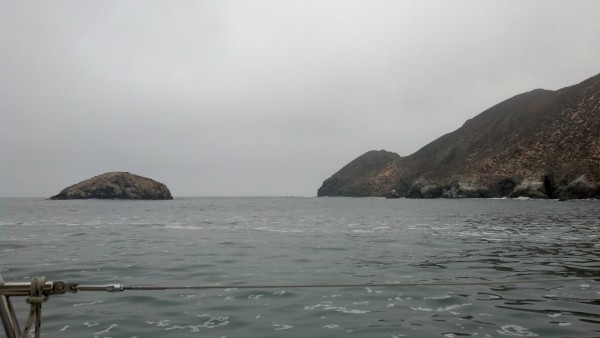 According to our cruising guide, the best place to anchor at Pt. Sal is about a quarter mile inside the big white rock that juts out from the point. This rock is not naturally white; it is in fact white because it is a favorite perching spot for hundred of cormorants, pelicans, and gulls, who decorate it with their excrement. We dropped our anchor in the recommended spot. Unfortunately for us, this "best anchoring" spot was downwind from the rock much of the time we were there. It was also close enough to the cliffs and breakers to seem like a bad idea to be there, though it was, in fact, quite safe as long as our anchor held, which of course it did. A fuzzy little bird that looked like a duckling paddled over to check us out when we arrived. I think it was a horned grebe in its winter attire, but I'm not sure.

We headed out of Pt. Sal early in the morning, under overcast skies, heading south toward the Dreaded Point Conception. For all the talk, you'd think there were krakens and dragons waiting in the water there. We listened to the weather before we left Pt. Sal, and sure enough, no dragons were predicted, so off we went, to meet our destiny....

The weather soon cleared and we had warm weather and sunny skies. We put the sails up and had a fabulous sail down along the coast pushed by 15 knots of wind. More than once, we'd look out to sea and hundreds of dolphins were arcing through the water toward us. Some came to play with SCOOTS' bow wave; others swam around the boat, or leapt out of the water. The water was so clear that it looked as though the bow-riding dolphins were floating in the air. It was magical, to have them with us! 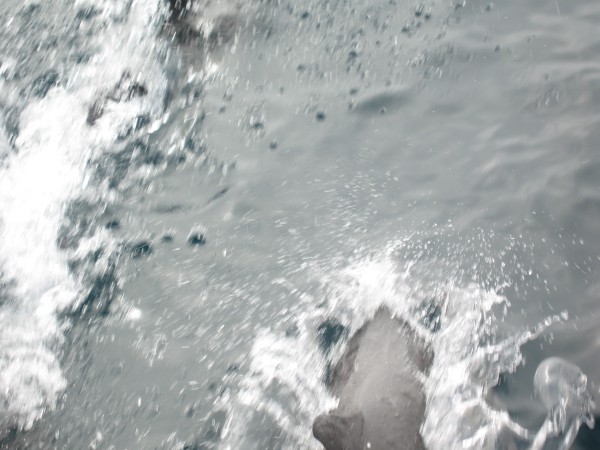 In mid-afternoon, after having seen hundreds of dolphins but no dragons, we rounded Pt. Conception and turned in toward Cojo Anchorage, a lovely cove with sandy beaches and clear, clear water. And we had it all to ourselves. 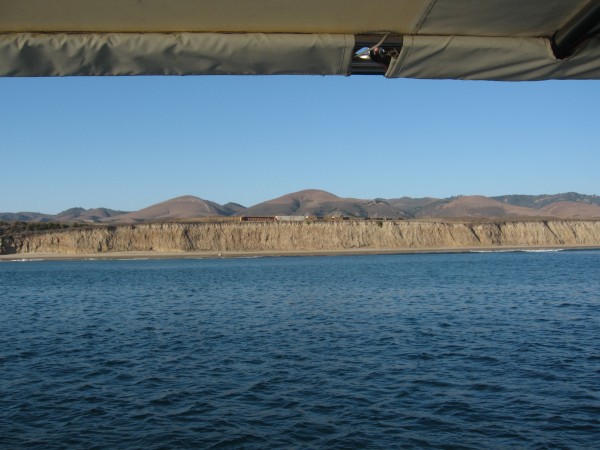 Oct. 8, 2014.
After taking our showers on the swim step (you can do that when you're the only boat in the anchorage), we put the dinghy in the water, loaded the outboard motor and the dinghy wheels, and headed ashore to practice our beach landings and explore the shoreline and bluffs. The beach landing went great! We waited for a lull in the swells, then Eric followed the surf in and we rolled onto the beach on our wheels. We pulled the dinghy up the beach and started exploring. 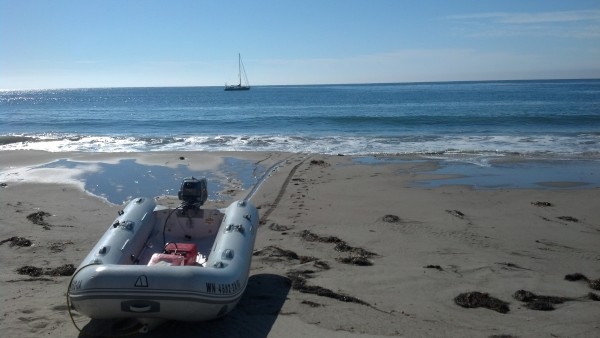 Eric went for a closer look at two boats that lay broken and battered on the shore; I walked up the beach looking for animal tracks. Then we both hiked up the bluff overlooking the cove. Not much there except for some dried cow patties (this land is a working cattle ranch), and some turkey vultures. While we were there, a pod of dolphins entered the cove and performed all sorts of acrobatics (aquabatics?), including synchronized flips and arching dives. They were amazing to watch!

We hiked back down and walked along the beach for awhile. Eric found a large abalone shell, which we decided to keep. When we were done exploring, we decide to go back to SCOOTS for lunch.

Getting back to SCOOTS proved more difficult than we'd anticipated. We knew we had to push the dinghy into the surf--between breakers--to get out beyond the surf line quickly. But this proved problematic. It took us four attempts, over the course of an hour, to get back to SCOOTS.

Attempt #1: Dinghy wheels deployed, outboard down and ready, bow-first into waves.
Result: We timed our entry for a lull, then pushed the dinghy into the water, the dinghy started to float, Eric got in, the dinghy wheels landed back on the bottom, we couldn't move, a wave came in, and swamped us. We got soaked, the dinghy got filled with water, we hauled the now-extremely-heavy dinghy back ashore, and spent the next ten minutes draining it and bailing with the abalone shell. And plotting a new strategy.

Attempt #2. Dinghy wheels deployed, outboard down and ready, bow-first into waves, we pushed the dinghy further out before getting in.
Result: Even with more water under them, the wheels landed on the ground again when we got in the dinghy, and we were swamped again. We hauled the now-extremely-heavy dinghy back on shore--again--and drained and bailed and plotted a new strategy. Two harbor seals poked their heads above the water to watch our antics. We must have been amusing.

Attempt #3. Dinghy wheels deployed, outboard down and ready, stern-first into waves.
Result: Hoping to get the wheels into deeper water sooner, we ran the dinghy into the surf stern-first. We got afloat, I jumped in, Eric jumped in and gunned the outboard, threw it into reverse, it roared to life, then stopped abruptly. A wave came in and swamped us. We hauled the now-extremely-heavy dinghy back on shore--again--and drained and bailed and cut away the cubic yard of kelp that had wrapped itself around the outboard motor prop and stopped it cold. And plotted yet another new strategy.

Attempt #4. NO dinghy wheels, NO outboard, bow into waves, row like hell.
Result: Hoping to (A) prevent the massive quantities of kelp floating in the surf from fouling the prop, and (B) keep the dinghy wheels from slowing us down and anchoring us to the ground, and (C) allow us to get the dinghy floating sooner, we took the wheels off, tipped the motor up, and ran with the dinghy as far and as fast as we could into the surf. Eric jumped in, grabbed the oars, and started rowing like hell. I pulled the dinghy into the water as far as I could, which, it turned out, was deeper than I could stand. With nothing to push off of, I had no leverage to pull myself into the dinghy. So while Eric rowed like a madman through the surf line, I held on and tried to make myself as streamlined as possible, and kicked like crazy to try to counteract the drag I was causing. Once we were safely past the surf line, I threw a leg over the side of the dinghy and Eric helped me in. Then we tipped the motor down, started it up, and raced toward SCOOTS, laughing like crazy people.

After rinsing off our clothes and all our gear on the swim step, we sat in the cockpit eating lunch and enjoying the sunshine. Eric suggested that when we get to the first dinghy-landing beach in Mexico, we should hire a local panga to take us to shore and sit on the beach, watching how other cruisers arrive and depart with their dinghies, gleaning from this what works and what doesn't. I think that's a great idea.