This morning we got the word that the Baja Haha fleet is holding in Bahia Tortuga for at least today, on account of the weather. The combination of a tropical storm south of Baja that hasn't indicated where it's going to go yet, and rough conditions developing offshore as a result of the interaction between a High Pressure north of us, and the Low Pressure south of us, has led the Grand Poobah to hold the fleet here for now. So while we wait for the weather conditions to sort themselves out, we've been enjoying the day here in Bahia Tortuga. As places go for being stuck, this is a pretty good one.

At the morning radio check-in, Eric offered to help out someone who had questions about how to use his Pactor Modem. Other people also wanted to learn about that, so we ended up with about a half dozen people in SCOOTS' cabin, learning how to download GRIBS and weather forecasts, and send and receive emails over the single sideband radio. 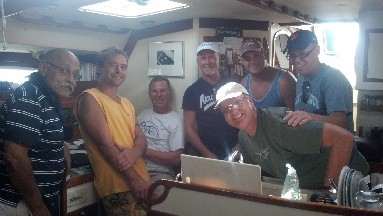 Eric dropped Sean and me off at the (very sketch) ladder on the side of the pier, before going off to another boat to help another cruiser with his Pactor Modem. I would include a photo of this sketch ladder if I had the bandwidth to do it, but I'll just say that it was rickety and rusty and missing handholds, and the top was tied to the similarly-rickety pier with a thin piece of rope. On the other hand, if we fell off, it was only about fifteen feet to the water and the water is really warm here.

Sean wanted to check out the local fishing tackle store, so we went there first. He bought some lures with really big hooks, that he hopes will entice some really big fish to bite. He'll get to try them out, once we get back to sea. 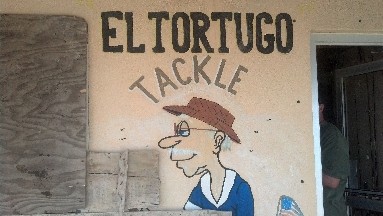 Eric met us at a beach cafe, where we all had lunch (fish or carne asada tacos). The tacos here are rolled up, kind of like the taquitos in the US. And they're really good. The beer is very light, very cold, but not very strong, which is good because it's also very prevalent and goes well with everything. 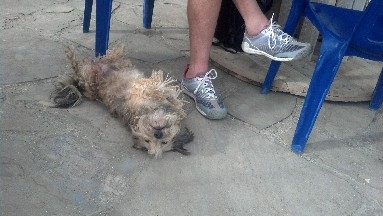 After lunch, we wandered back over to the baseball field, where we watched an impromptu game between some cruisers and a local teen girls' softball team. It more closely resembled a softball game, than the one between the cruisers the other day, but it was still hilariously irreverent.

At a small market, we bought some local cilantro, corn tortillas, and eggs. The eggs were not refrigerated, as is common practice in many countries besides the US. We've learned that if the eggs are always kept at ambient temperature, they can be stored that way for a few weeks, and don't need refrigeration. We'll give that a try.

We wandered back to still another beachfront cafe, and hung out there watching the sunset and the goings- on at the beach. A couple of local kids came by with some still-warm donuts, which we couldn't resist.

Back on SCOOTS, I took a shower and Eric and Sean cooked up some mole (pronounced Mo-lay) chicken. It was amusing to listen to them trying to figure out what the directions said to do with the mole sauce, since Sean had bought it in town and the directions were in Spanish. They looked up the word "taza" and found that it means either "cup" or "toilet bowl." They had a lot of fun with that. 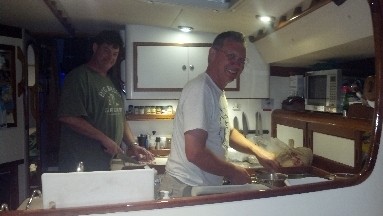 We may be on our way south tomorrow, or we may not. We'll have to see what the weather forecast looks like in the morning. Sean has begun investigating bus options, in case we are delayed long enough that he would miss his flight out of Cabo next Sunday. Hopefully, we'll be in Cabo before then.
Comments
Newer Older
Contents