On Tuesday afternoon, we packed some small overnight bags, walked over to the bus station, and boarded a bus for the town of San Ignacio, about 40 miles inland from Santa Rosalía.

During the hour-long bus ride, we passed through miles of stark, cactus-studded volcanic landscape. Mexico's Highway 1 snaked though the hills and hugged the edges of cliffs, as it wound its way from the coast to the interior of the Baja peninsula. Off to the east, the dormant volcanoes known as the Tres Virgenes (Three Virgins) rose up out of the flat plains to heights of over 6,000 feet. Off to the west, huge gray thunder clouds floated over the valleys, occasionally spewing bolts of lightning. Inside the bus, we reveled in the coolness of the air conditioning and were entranced by the scenery rolling by. 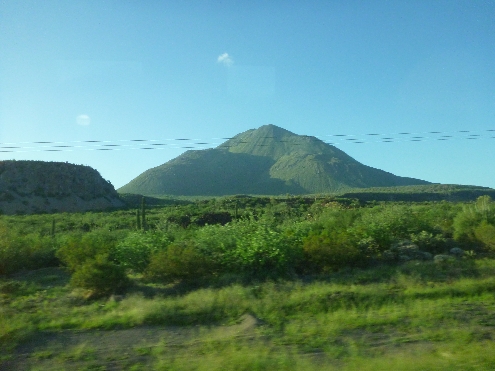 We knew we were getting close to San Ignacio when palm trees appeared in the distance, seeming so out of place among the cactus and mesquite. With its spring-fed river, San Ignacio is indeed an oasis in the desert. 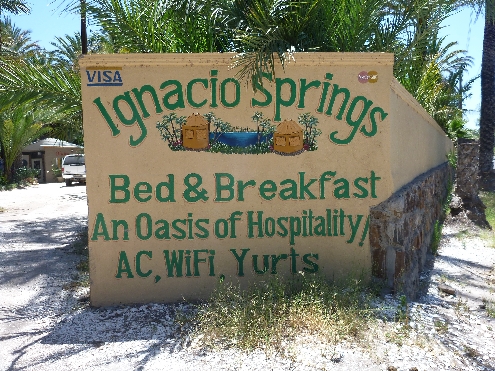 Disembarking in San Ignacio, we opted to take a taxi to our lodging, rather than walk, with those dark clouds glowering nearby. As the taxi driver pulled into the driveway of the Ignacio Springs Bed and Breakfast, Terry Marcer, one half of the friendly and energetic Canadian duo who own and run the B&B, came to meet us. She showed us to our yurt – yes, we stayed in a yurt, with air conditioning!– and then give us a quick tour of the palm-shaded river-front property, before taking us back to the main building to meet husband, Gary. We hit it off with Terry and Gary right away; they're great people. 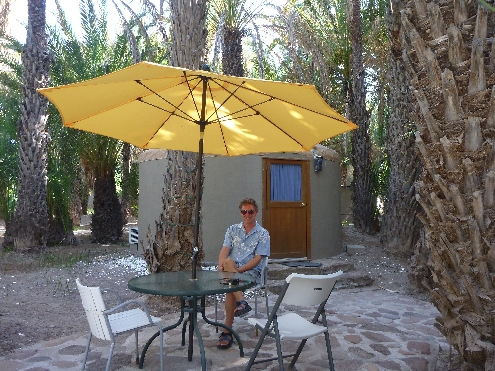 Eric and our yurt

They'd been playing a card game called Spite and Malice, which was new to us. After letting us watch for a few hands, they started a new game and taught us how to play. Before we left two days later, we had also learned another card game, called Oh Sh!#. Both are really fun and can be played with two people, perfect for those "what are we gonna do tonight?" nights on SCOOTS.

Gary and Terry let us borrow their truck to drive into San Ignacio for dinner. As luck would have it, we had visited San Ignacio during the preparation for their big annual fiesta honoring the namesake of the town and its Jesuit mission, San Ignacio (Saint Ignatius of Loyola). Culminating on July 31, the anniversary of San Ignacio's death, the days-long fiesta is a fun conglomeration of kitsch, music, dancing, pageantry, food, and history.

As we ate dinner on the small town square, shaded by its huge laurel trees, we enjoyed watching the activities on the square. It struck us how some things are universal, and could happen in any town: for instance, we watched as small groups of strutting teenage boys and giggling teenage girls walked – initially separately – around the square, eventually converging into chatty mixed-gender parties. Stray dogs padded around the square, hoping for a pat on the head, someone to play with or, better yet, a handout of food or water.

The next morning, after a very comfortable air-conditioned night, Eric and I took one of Ignacio Springs' kayaks down the San Ignacio River to its spring-fed source. Along the way, we marveled at the number of palm trees that lined it shores. 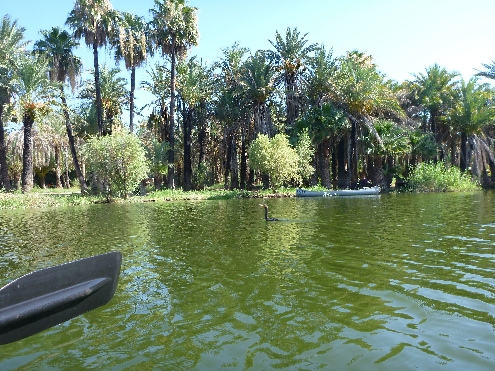 The palmetto trees, we were told, are native; the missionaries planted the date palms, which have grown and reproduced in profusion ever since, and are still producing copious amounts of dates. 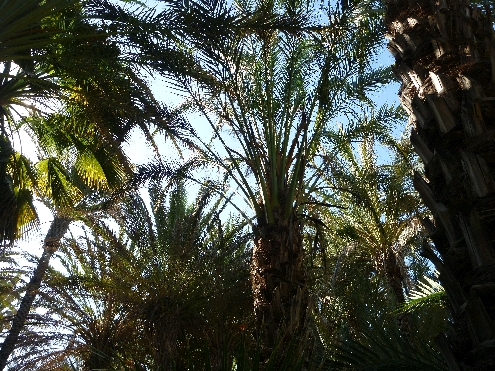 Gary offered to take us on his errands to visit "the rancho" and buy some mangoes that Terry would use for making her delicious mango-pepper jelly. The rancho, to my untrained eye, is an expanse of semi-arid desert with some dirt roads through it and some small homes and outbuildings here and there. 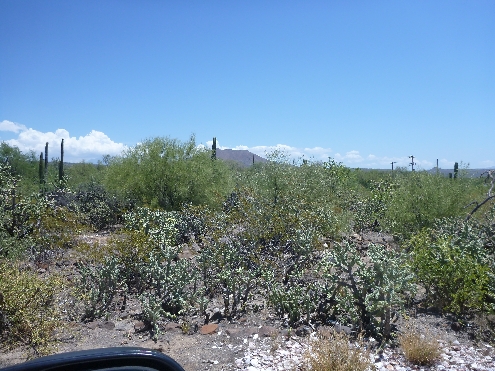 Some of the houses had homemade carnival rides in the front yard, built by the craftsmen who lived there. 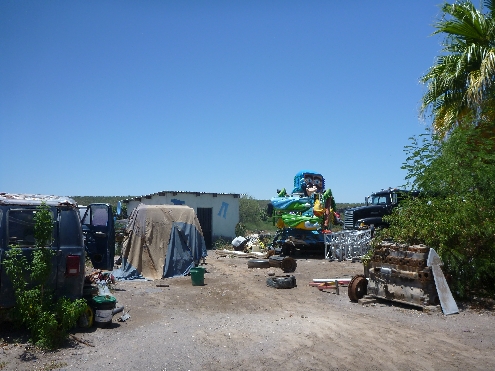 One of the homemade carnival rides

Gary showed us a huerta (farm) where some mango and fig trees were growing, heavily-laden with fruit. The farmer used to also grow watermelons, he said, but Hurricane Odile wiped out everything on the ground here last fall. I was surprised to learn that the volcanic soil in this area is apparently very prolific; Gary said that almost as soon as one of the dates falls from a tree, it starts growing. Having seen the number of palm seedlings growing under the trees, I believe him. 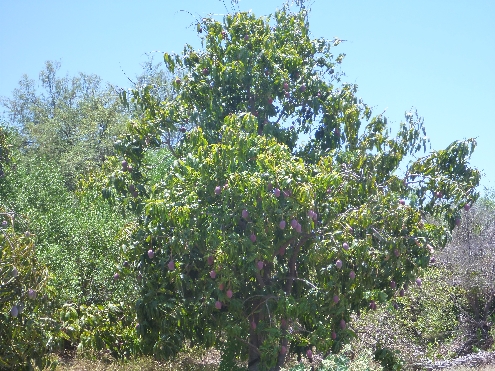 Mangoes in the desert

Borrowing Gary and Terry's truck again, Eric and I went back into San Ignacio in search of dinner. We ended up at a little temporary food stand that had been set up on the square, where we had tacos al pastor (pastor is seasoned meat that is cooked on a vertical spit, like gyros meat). It's my favorite kind of taco.

After dinner, we walked around the town a bit, following some of its dirt roads up the hill past brightly-colored stores, concrete-block houses and vacant lots. When we came back to the square, a long table had been set up, draped with orange decorations, and a few young ladies in fancy dresses were milling around. Something was going to happen! Maybe a beauty pageant? We found a table at the back of the square and sat down to watch the festivities.

At 10:15 pm, a man came on stage and approached the microphone. He started making announcements and introductions, apparently for the half-dozen dignitaries who were now seated at the decorated table. After that, each of the half-dozen people gave a speech. It was interminable; even the townspeople tuned them out. Eric said, "The only thing more boring than political speeches you understand are political speeches you don't." So true.

During the politicians' speeches, the young women in the fancy dresses were lined up right next to our table, nervously adjusting and readjusting their bodices. Finally, at about 11:00 pm, the man started announcing the contestants of the Reina (Queen) de la Fiesta de San Ignacio pageant. Feverish bodice adjusting ensued. Apparently, the contest had already been held, and the Queen and her court were being announced. One by one, as her name was called, the young ladies sashayed into the center of the square, where each had her sash and tiara applied by one of the speech makers. To Eric's and my amusement (admittedly, it doesn't take much to amuse us), the background music playing during the entire Reina ceremony was a song (in English) called "Love Me Like You Do," whose lyrics (you can look them up if you're interested) are basically a come-on song. We wondered what percent of the audience understood the words. This part of the night's events culminated with last year's reina taking off her fancy tiara and putting it on the head of the new reina, who then took a lap of the square doing the queenly wave.

After watching a couple of dances by some of the town's kids, we headed back to the B&B for some sleep. The celebration was just getting going (and lasted until 5 am, we heard later), but we were worn out.

The next day was It's a Small World Day for us. Why? Well, believe it or not, Terry and Gary know some people in San Ignacio who used to work at SRI in Menlo Park, at the same time Eric was there. Yep. He didn't know them well, but he know of them. These people now own some property in San Ignacio: one of them owns a museum and bookstore in town, and another couple of them also own a boat in the Bay Area that they sailed in Mexico for many years. In the morning we'd gone to town to meet Juanita (aka Jane), who had lived in Portola Valley and whose ex-husband was one of the people who'd worked at SRI. She has an amazing collection of photos and artifacts and books in her home, which is called Casa Lerée, that she likes to share with people. 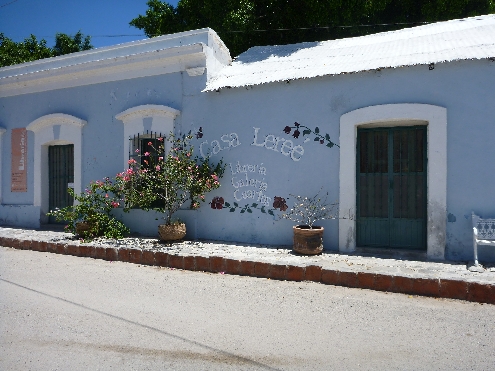 Eric and I spent two hours there, perusing all her interesting artifacts. Jane also knows some people who I know in the Environmental Volunteers organization, as she was active in trail construction and hiking. She also taught me a Spanish word that I really like – she spelled it entrelaces. I found that it's from the verb entrelazar, which means to interweave. Here in Mexico it's used to describe the connections among people. I like to expand it to include connections among all things.

When we got back to Ignacio Springs, we met Carlotta, whose husband had also worked at SRI and who is one of the owners of the boat. We had a really nice chat about SRI, cruising, Mexico, and the Bay Area.

It's amazing, the connections you can make when you take the time to try to find them...or let them find you.

Back in Santa Rosalía now, we're making final preparations to head north again...provisioning, propane refills, on-shore laundry, and such. We're intending (planning is such a strong word) to leave Monday evening, for the overnight sail to Bahía San Francisquito, where we'll meet up with some other cruisers who have already headed that way. I suspect that we won't have access to Internet while we're there, so this may be the last blog entry with pictures for awhile. Enjoy! 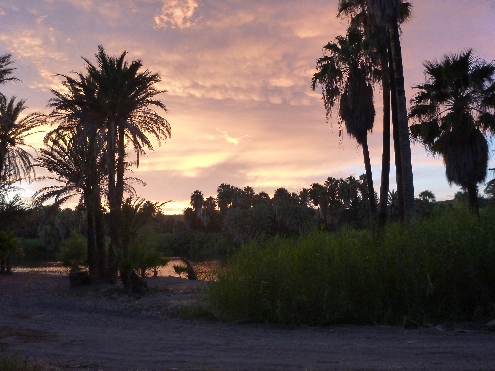