In my last blog post, I left everyone enjoying the full moon eclipse with us in Bahia Gonzaga. I hope you liked it as much as we did.

We've done some traveling since then. Quite a bit, actually. Here's a rundown of where we've been, the highlights of each place, and some of what we've been up to, since then.... 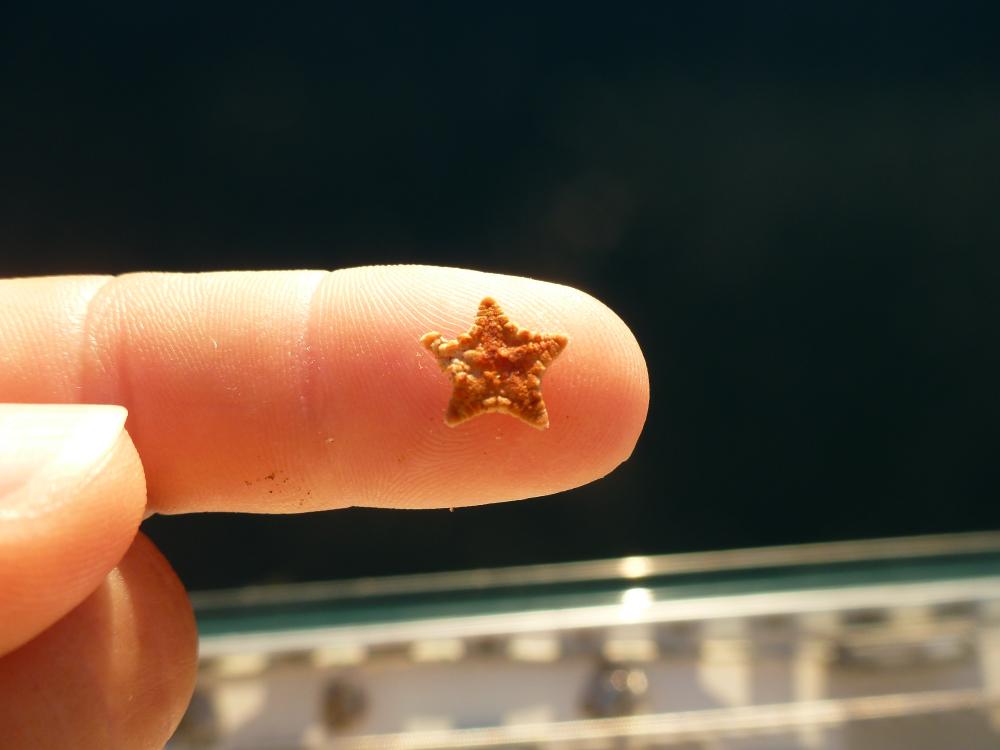 A little friend we picked up.

Tijereta Cove (29 45.0'N, 114 17.4'W) to Ensenada Alcatraz (29 09.8'N, 113 37.1'W): Recalcitrant wind, two changes of plans, and a hat-overboard drill. The forecast was for light north winds, that would push us south. Yay! When we left, the wind was light, but it grew increasingly stronger and, yes, you guessed it, it turned and came right up the channel onto SCOOTS' bow. It also blew my Tilley hat off my head, as I was working on deck, resulting in a successful crew-overboard procedure in which we plucked my floating hat off the water and returned it to the safety of the cockpit. The wind continued to blow really strong from the direction that we wanted to go, and it also kicked up some particularly pointy waves that got our deck wet. This was not a fun way to spend a day. : (

After a few hours of this - and with many more to go - we decided to bail on our plan to sail all the way to Ensenada Alcatraz (about 55 miles south) and instead head diagonally across the channel toward Puerto Refugio, which was quite a bit closer. Not long after we changed course, the waves settled down and the wind hinted that it might come from a more reasonable direction. We looked at each other and asked, "Do you feel lucky?" We did, so we altered course, resumed our original plan, and spent the rest of the day sailing toward Ensenada Alcatraz. 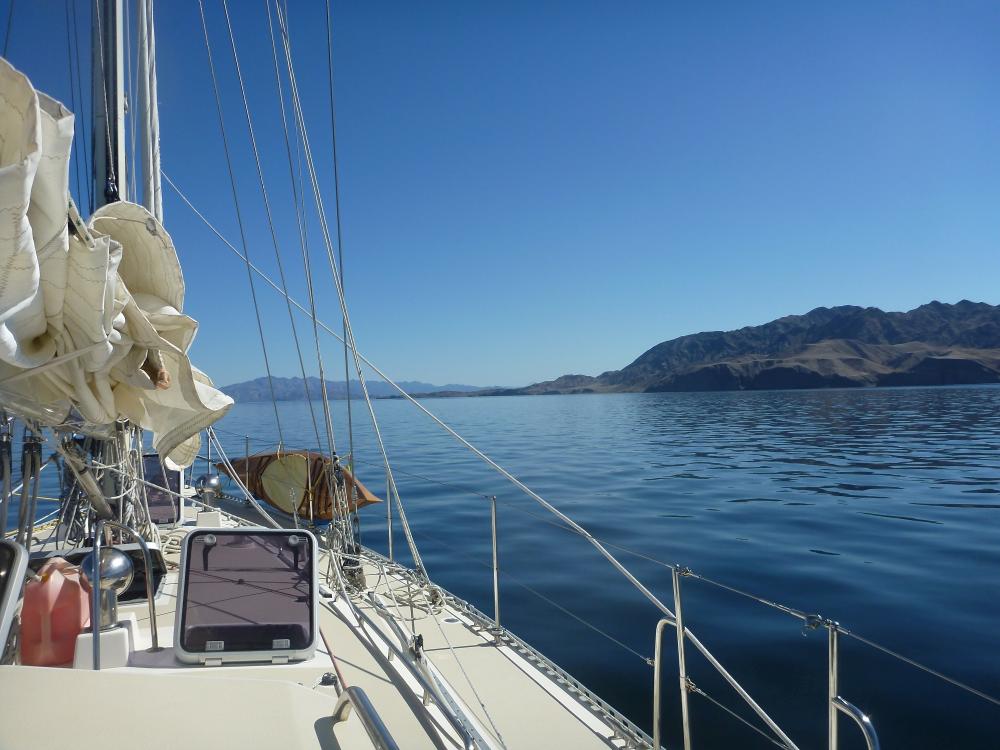 Ensenada Alcatraz to Bahia de los Angeles (28 53.76'N, 113 31.11'W): The Annual End of Summer Party and Duffy's Tavern Invitational Dart Tournament. Jay and Janice, who live aboard the sailboat Ceilidh and also have a palapa on shore, which they call Duffy's Tavern, invited all the cruisers in the northern part of the Sea of Cortez to a weenie roast, potluck, and dart tournament at Duffy's at the end of September. This event was actually the impetus that brought us back to Bahia LA from Bahia Gonzaga. The ten sailboats that anchored off Duffy's for the event represented about 80 percent of the boats actively cruising the Sea this summer (yes, there were perhaps a dozen boats moving around), and we all knew each other by now. This would be the last time that most of us would share an anchorage with each other, as with summer ending, we would all soon be heading south according to our own schedules. We all had a great time, ate a lot of weenies, swapped stories, and played a lot of darts. Eric came in fourth overall, scoring a prestigious Bahia LA beer cozy as a prize. Nia from Azul beat everyone handily to become this year's Darts Champion. 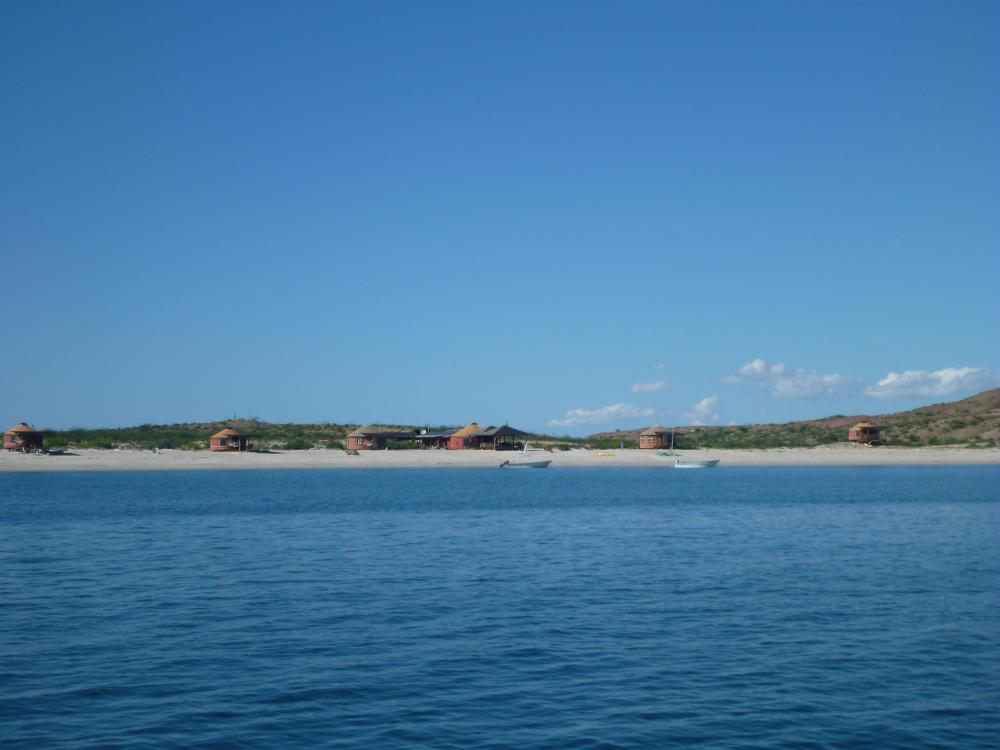 The resort at Alacran.

Bahia LA to Ensenada el Alacran (28 53.920'N, 113 22.667'W): A fancy resort, and sharing a magical glow. We left Bahia LA and had a short but nice sail about 12 miles south to Ensenada el Alacran. Alacran means "scorpion" in Spanish, and the cove is named for these critters. I was glad not to be sleeping on land. We pulled into the cove in the afternoon and dropped our anchor a respectful distance from the handful of yurts comprising the Las Animas Wilderness Retreat, an all-inclusive resort on shore.

While we were enjoying an afternoon card game in our cockpit, a man on a stand-up paddleboard came by and invited us to happy hour at the resort. We said OK! He told us to show up when the sun went below the mountain, and so we did, landing our dinghy on the white sand beach just after sunset. We had a fun time chatting with the resort's ten guests, and with Tom and Fred, the resort's two pilot/guides. To reach the resort, guests board a 5-passenger plane in San Diego, fly to Bahia de los Angeles, and then take a panga (small open boat) a dozen miles to the resort. Once at the resort, guests have a wide selection of activities to choose from, including swimming with whale sharks, snorkeling, fishing, swimming with sea lions, kayaking, hiking, or just relaxing. I guess we behaved well enough, because we were invited to stay for dinner.

And for the next day, as well. Once again, we dinghied ashore just after sunset. I tripped getting out of the dinghy and landed on my butt in waist-deep water, so we made a quick trip back to SCOOTS so I could change into some dry clothes. Oops. Haha who said the cruising life is glamorous?

Once again, we had a great time talking with the guests. A young couple visiting from Oklahoma had heard that there was bioluminescence in the water, but had never seen it. Eric and I invited them for a nighttime ride around the cove in our dinghy, to let them experience, first-hand, the gorgeous bioluminescence that lights up the Sea at night. And they did! They oohed and ahhed at the spectacular trail left by our dinghy prop at night, a glowing ribbon two feet across, and when we got out away from the resort's lights, we were all able to see the individual bioluminescent lights by splashing the water with our hands. It was really fun to share some of the magic of our daily life.